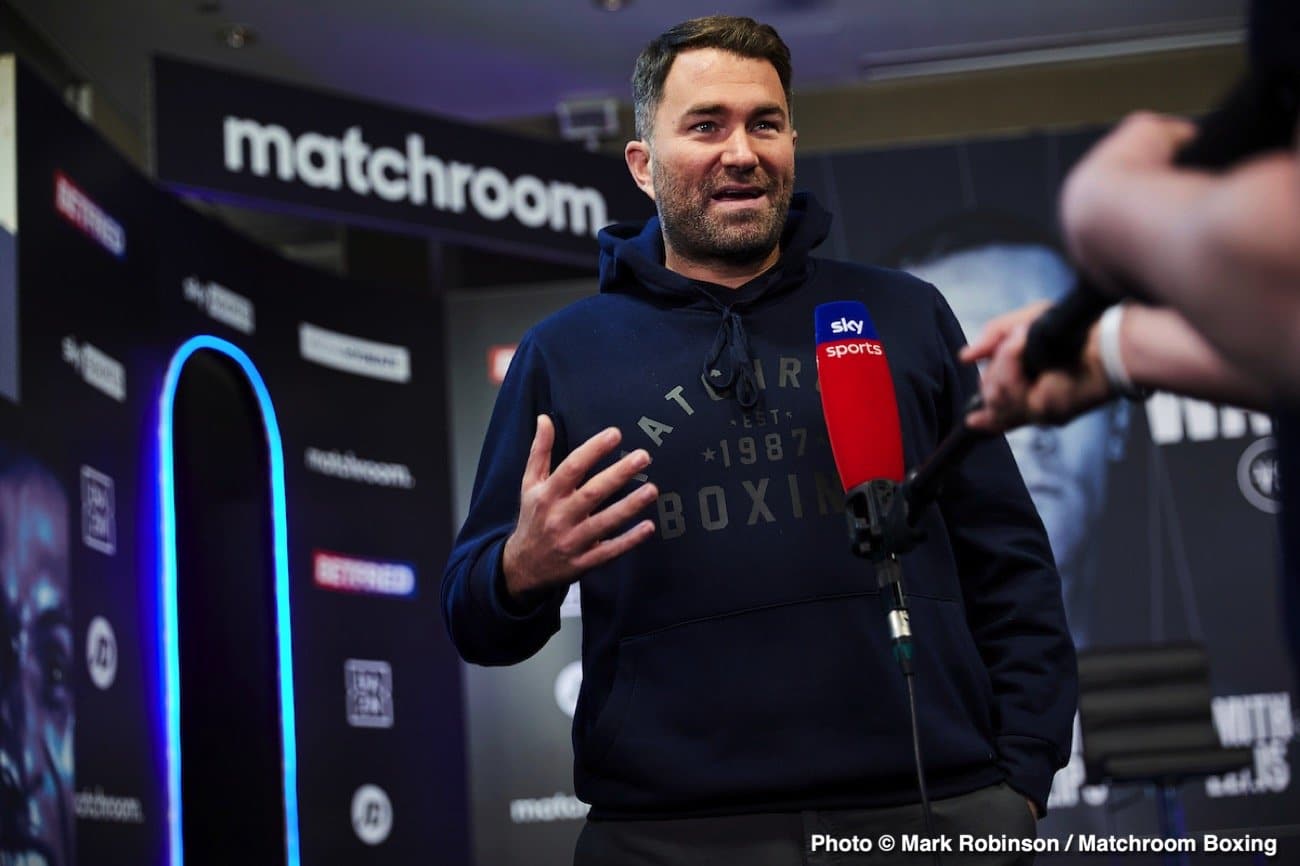 Eddie Hearn is frustrated by the WBC’s decision to order Jo Jo Diaz to face Ryan Garcia, but says he has been told in writing that they would be happy for Diaz to face WBC lightweight champion, Devin Haney.

Garcia won a final eliminator for Haney’s belt by beating Luke Campbell in January to become WBC interim champion, but passed up on the opportunity to face his former amateur rival and instead opted to fight Javier Fortuna.

When Garcia pulled out of a scheduled clash with Fortuna in July, after publicly revealing his struggles with mental health, the WBC sanctioned Diaz to face Fortuna for the interim title.

The 28-year-old beat him on a unanimous decision in July to put him in line to face Haney as interim champion.

“Have you ever known anything more farcical?” Hearn told Pro Boxing Fans.

“Where two guys that win final eliminators to fight Devin Haney actually get ordered to fight each other.

“When Ryan Garcia beat Luke Campbell, Golden Boy asked the WBC, ‘don’t order the fight with Devin Haney, please,’ so they didn’t and they ordered the Javier Fortuna fight.

“It’s just ridiculous. I feel for Devin Haney, because he’s sitting there waiting to take all the big fights.

“Jo Jo Diaz put on an instagram story the other day going, ‘oh, Eddie Hearn, he talks shit’. What am I talking shit for?

“The mandatory challenger, all he should want is to fight the champion, you’ve just won a final eliminator.

“It’s ridiculous. What’s the point in having a final eliminator if you’re not going to order that against the champion.

“Then two guys ducked Devin Haney and then you make them fight each other. It’s a duck off.”

Despite the order, Hearn says he was told by WBC President, Mauricio Sulaiman that the governing body would be happy to see Haney face Diaz.

“I wrote to Mauricio last night and he said, ‘oh, we’ve ordered Ryan Garcia against Jo Jo Diaz, but by the way we’re more than happy for Devin Haney to fight Jo Jo Diaz.’

“So no excuses. Don’t turn around and say, ‘oh, we can’t do that fight now, because the WBC have ordered this.’ They’ve put it in writing. They’re happy for Jo Jo Diaz to fight Devin Haney. Make the fight.”

Benn called for a showdown with the former four-weight world champion after beating Adrian Granados by unanimous decision earlier this month.

Broner has not fought since a unanimous decision win over Jovanie Santiago in February.

Benn is set to return in December in a fight that will be on DAZN and Hearn says Broner has declined two offers to face the rising British welterweight.

“Both have been rejected. We’ll see if we can find the money.”