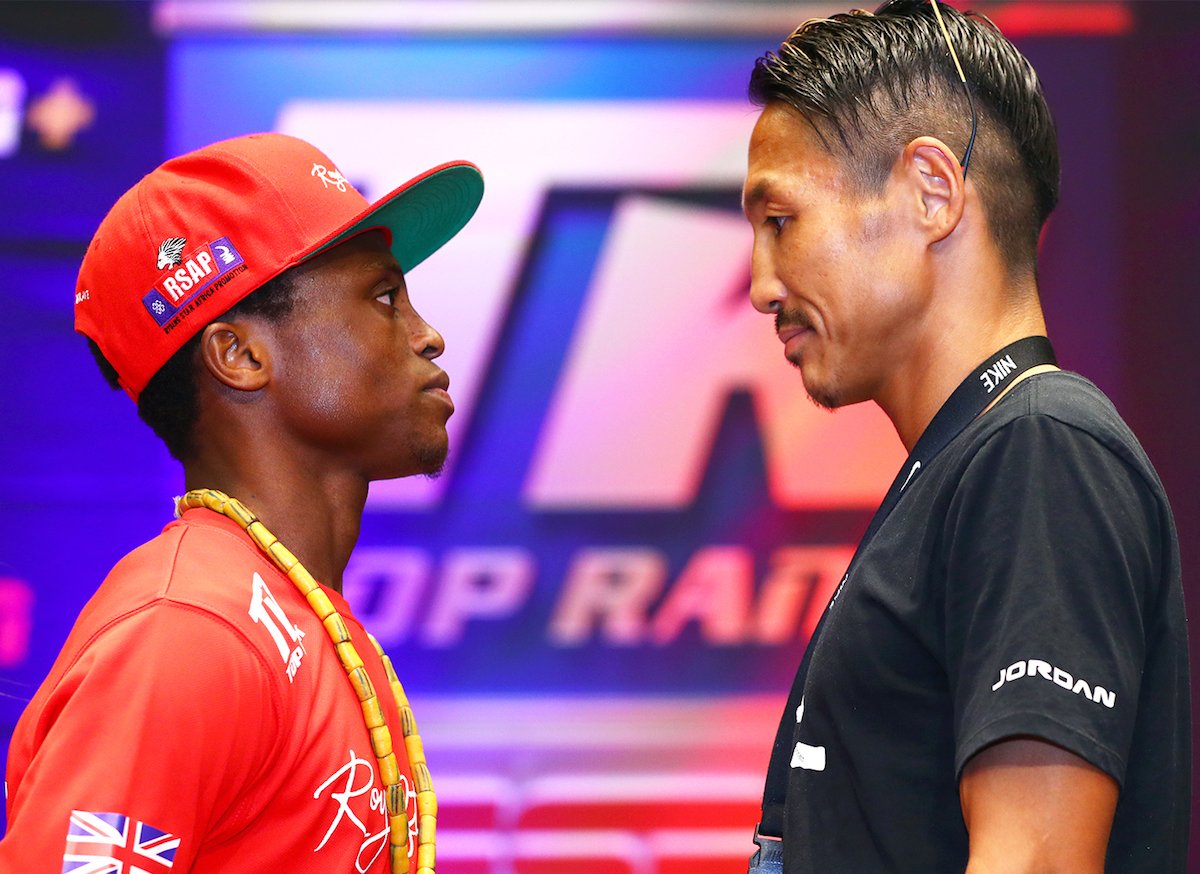 Ghana’s Isaac ‘Royal Storm’ Dogboe (19-0, 13 KOs) has yet to fully savour becoming a world champion at age 23 and so soon the young warrior from Africa has to step into the ring again, on Saturday night and once again everything is at stake, this time against Japanese veteran, Hidenori Otake (31-2-3, 14 KOs) in a co-main event along with Ray Beltran’s WBO lightweight title defence against Jose Pedraza on the next edition of ‘Top Rank on ESPN’ at the Gila River Arena in Glendale, Arizona (10:30 ET/7:30 PST).

The young Ghanaian gave it his all back on April 28 in Philadelphia when he rose from the first knockdown of his career, in round one to dominate, knock down three times before stopping the previously undefeated and never visited the canvas Jessie Magdaleno to annex the WBO junior featherweight world title, the youngest to do it from the West African country that produced Azumah Nelson, Ike Quartey and Joshua Clottey..

Four months on and Dogboe is in the mood to do it again, notwithstanding the massive vote of confidence he has consistently passed in the 37 year Otake who has not lost since his only previous world title bid four years ago, racking nine straight wins, during which he won the Oceania Pacific Boxing Federation (OPBF) super bantamweight belt last year and is coming off a third successive defence in March this year.

“First and foremost, I give all the glory to the almighty God for bringing me here safely and making me who I am today and I can’t wait to get back on ESPN. It’s a big platform for myself and also a great platform to showcase my talent once again. I want to say thank you to Bob Arum and Top Rank promotions and all the staff for putting this show together. It’s great. It is always a huge platform,” Dogboe began his speech at the Renaissance Glendale Hotel and Spa on Thursday.

“Come Saturday night, you don’t have to stay at home. Everyone has to come down to the Gila River Arena. It’s going to be fireworks because there’s no way that something we worked so hard for is going to slip through our hands. He says he’s going to be fighting for his soul. I have no need for his soul because I did not create him. I just want to knock him out on Saturday night and retain my title,” young Dogboe stated confidently.

“Otake is a great guy. Physically, he’s strong. This is his second world title challenge, his second opportunity, and we know he’s going to come out fighting. He’s going to come out guns blazing. But, you know, like we always say, we don’t have to get ready, we’re always prepared. Everything he brings to the table, we have an answer for it,” Dogboe said.

But equally ready to give out his heart for glory is the 37 year old Otake who made his pro debut way back in December 2005 when Dogboe was only eleven years old and is fighting outside the famous Kakoruen Hall in Tokyo for just the second time in what will be his career fight number 37.

“First of all, I am so very happy to be here. I want to thank Bob Arum and everyone at Top Rank for giving me this amazing opportunity,” Otake said at the media interaction.

“As you may know, in my first world title match in England {against Scott Quigg}, I lost. As happy as I am, taking that into consideration, I have trained very hard to make the most of this opportunity,” the Japanese star added.

Not to be dissuaded however from his ultimate point to unify the super bantamweight division after having all but agreed a deal with WBA title holder, Daniel Roman on social media, Dogboe wants to quickly finish the job on hand in Arizona on Saturday night to possibly set it up then shift focus to the future where his father/trainer, Paul has always insisted his son will be the first pay-per-view star to come out of Africa.

“Hidenori is very tough, and he’s a credit to Japan. He’s one of the guys who’s making Japan boxing rise. At this moment, he’s a stumbling block that’s in my way to get to a unification fight. We are looking to go out there Saturday night and put on a masterclass performance and look forward to unify the division, God willing,” Dogboe said.

“With Top Rank and Bob Arum, we can hopefully fight at the end of the year or early next year in a unification fight. Hard work never stops. Right now, our main target is to take care of Hidenori Otake,” Dogboe concluded.

Tickets to this world championship doubleheader, priced at $125, $75, $50, and $25, not including applicable fees, are on sale now. Tickets can be purchased at the Gila River Arena Box Office, by phone at 800.745.3000, or online at www.gilariverarena.com.