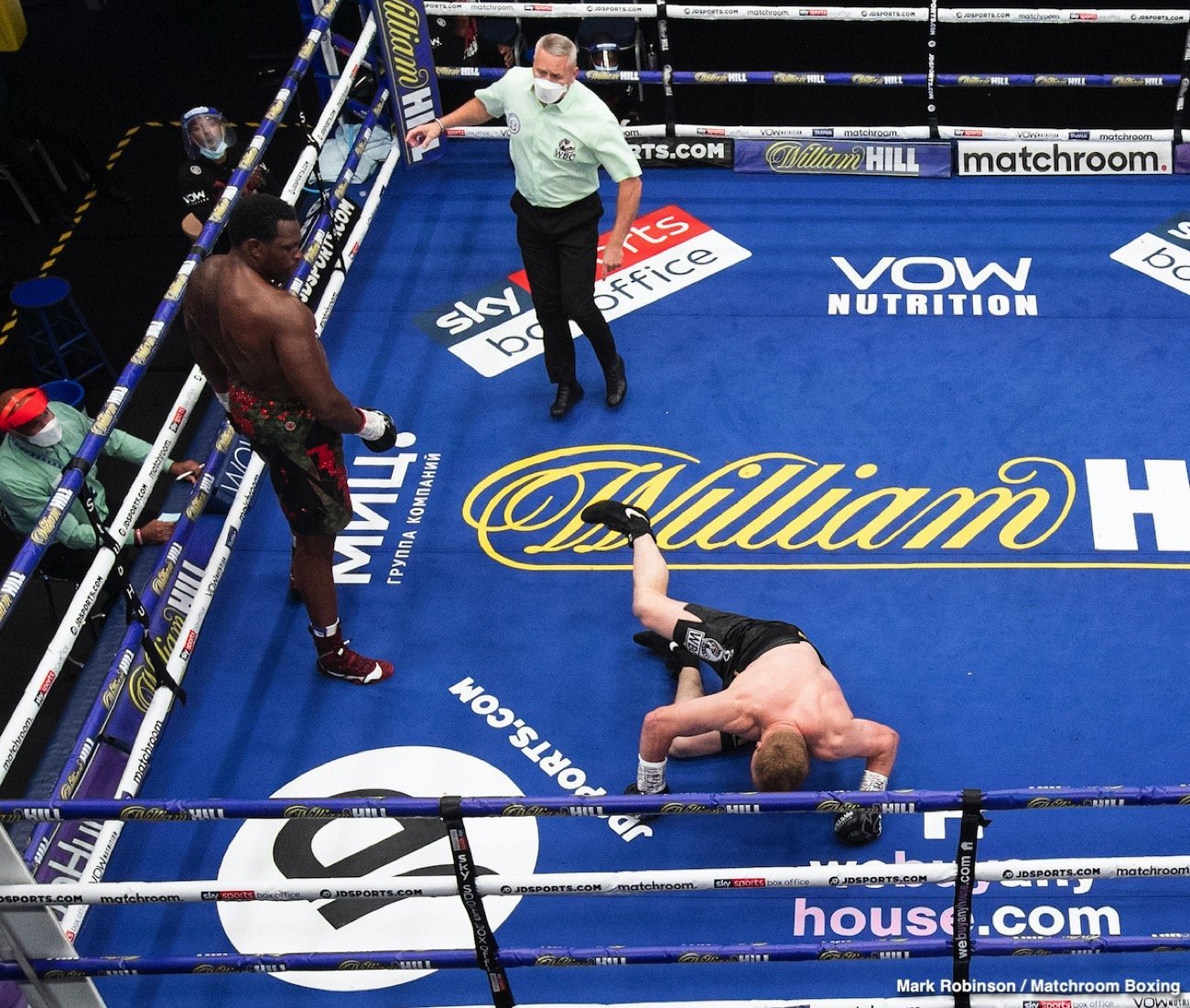 The Body Snatcher Dillian Whyte’s dreams of fighting for a world title in early 2021 fell apart for him tonight when the underdog Alexander Povetkin knocked him flat in round 5 at the Matchroom Fight Camp in Brentwood, Essex.

Povetkin ducked to his left and threw a perfectly placed left uppercut to knock the 32-year-old Whyte down. Whyte was knocked unconscious from the moment the punch landed from Povetkin, and he fell flat on his back without even attempting to brace his fall.

When you watch a fighter get knocked out like that, you can tell that they’re badly hurt.

Dillian wants a rematch with Povetkin

Whyte had been doing well in the fight before that. To be sure, he looked like he was on his way to a knockout victory. When Dillian put the 40-year-old Povetkin (36-2-1, 25 KOs) down twice in the fourth round, it seemed like a forgone conclusion that he would win.

“Can we get the rematch in December?” asked Whyte to his promoter, Eddie Hearn, on Matchroom Boxing Instagram. “Okay cool. I’m good, I’m good, it’s one of them things where he just landed. I was bossing it.

“It is what it is. Rematch, it’s all good. That’s what heavyweight boxing is about.”

The way that Whyte (27-2, 18 KOs) was knocked out, it might be wise for him to think hard about facing Povetkin in December. If Povetkin shook something loose with that knockout, the last thing that Dillian, 32, needs is to return to the ring to face him four months later.

For a knockout like the one Whyte suffered, he should take at least months off to clear the cobwebs from his head, and let his brain recover from the knockout. This was a clinical knockout, not a regular type of stoppage,

“All I’m saying is age is nothing but a number,” said Dereck Chisora on social media in reacting to Povetkin’s knockout win over Whyte. “David [Haye] is making a comeback now. Eddie [Hearn] shut the f*** up.”

The way that Povetkin tonight, he looked like the younger fighter of the two, which proves that age is just a number. I don’t know if Whyte took too much weight odd in trimming down from the 280s to 252 lbs for tonight’s fight, but whatever it was, he looked like the older fighter.

Afterward, Hearn looked like he wanted to cry as the boxing media were interviewing him. This wasn’t what Hearn had planned. They likely had hand-picked Povetkin as a safe opponent for Dillian to pick up a sure-thing win. After all, Povetkin had fought to a 10 round draw in his last contest against Michael Hunter last December, and he was almost knocked out in the first round.

Hearn thought so much of Hunter that he recently released him from his contract with Matchroom Boxing. In other words, Hunter wasn’ valued enough to keep him despite him fighting to a 10 round draw against Povetkin. So for Hearn to release Hunter after that performance, it told you what he thought of Povetkin.

Whyte and Hearn were looking past Povetkin

Going into tonight’s fight, Dillian had planned on using his mandatory status with the World Boxing Council to either force a title shot against champion Tyon Fury. The Gypsy King would have been stripped of his belt by the WBC if he failed to defend against him in early 2021.

Read:  Russell Jr. says destroying Magsayo could work against him

It was a classic mistake of Whyte and Eddie looking past a dangerous opponent towards a more lucrative match against Fury. Whyte isn’t going to give up without a fight, as he wants an immediate rematch with Povetkin in December, and he’s got the rematch clause to force the Russian fighter to face him again.