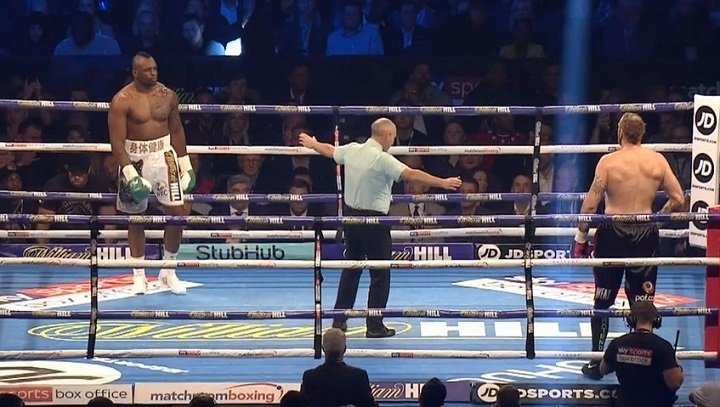 The chief support to the Joshua-Takam heavyweight title fight, between Dillian Whyte and Robert Helenius promised plenty but sadly delivered very little. Whyte did far more work than Helenius, who was content to box on the back-foot and basically survive.

After a slow opener, the fight briefly caught fire in round-two, as Helenius, with his height and reach serving him well, tagged an advancing Whyte with a couple of right hands to the head. At the very end of the session Whyte’s legs gave a definite wobble. Was the upset on the cards? As things turned out, no.

Helenius, content to see out round after round, offered zero ambition in the fight’s second half, perhaps nursing an injury to his right hand which he continually shook. Whyte, sometimes swinging so wildly he threw himself off-balance, was in total control by the fifth, with Helenius looking tired.

The snoozer dragged on for round after round and though he was a wide winner, Whyte should have, could have done more. Chasing the big fights as he is, Whyte should have made a real effort to overwhelm Helenius and take him out. It never happened. Has Helenius fallen firmly into sparring partner mode as commentator Carl Froch suggested? It did look like it (33 year old Helenius sparred Joshua ahead of tonight’s fight).

As for Whyte – he really is a fighter who can blow hot and cold. Capable of giving us thrilling fights (against AJ and against Dereck Chisora), the 29 year old is also guilty of fighting on autopilot, as was the case tonight. Has “The Body Snatcher” earned himself a shot at WBC ruler Deontay Wilder (tonight’s win saw Whyte win the WBC silver strap)? Would you give him a shot at derailing Wilder?

As for Helenius, he talked a great fight ahead of tonight’s bout but, after threatening early, ultimately did very little at all. We may have seen the one-time contender’s final fight of significance.