Dillian Whyte is volunteering to step in and face Anthony Joshua next if his deal with Tyson Fury falls apart for a December 3rd part.

Whyte (28-3, 19 KOs) has lost two out of his last three fights by knockout, and he would seem like a poor choice for Joshua (24-3, 22 KOs) to fight if the Fury fight falls through. However, there are a lot of boxing fans that would love to see a rematch between Joshua and Whyte.

They wouldn’t care that both fighters are coming off losses and appear to have seen better days. Joshua knocked out Whyte in the seventh round when they fought in 2015.

At the time, Whyte had a shoulder problem and was basically fighting Joshua with just one arm, which made the fight one-sided other than the second round. Whyte stunned Joshua with a left hook in round two, resulting in him needing to weather a storm of heavy shots in the round.

The boxing public would likely much prefer to see Joshua fight Joe Joyce than Whyte at this point.

“He’s training for it; he’s ready for it and willing to take Fury on, so if that fight don’t get made, I’ll step up and fight Joshua,” said Dillian Whyte to Sky Sports Boxing.

“It would be a great fight. I think it could happen, but Tyson Fury is putting a lot of pressure on, not intelligently,” said Whyte when asked if he thinks the Fury vs. Joshua fight can happen. “He’s trying to use social media, and he’s being a bit silly, really.

“These big fights take time. There’s a lot that goes in. There are a lot of commercial things, protecting your best interest and other things. These guys are on two different TV stations.

“It’s not as simple as, ‘Sign the contract, you big dosser.’ That doesn’t work. A lot of people just listen to what Fury says. That’s not how it works. Big fights take time or they can all fall over if things aren’t done properly.

“It’s a tough one because Fury is applying a lot of pressure. I think both men want the fight, but it’s a bit of a strange one. I don’t know who is the blame.

“They both want to fight. It’s a straightforward fight. It’s a fight that would sell out just like that,” said Whyte when asked who would be the blame between Joshua and Fury if the fight fails to happen.

“There’s a lot of money for both guys. I don’t understand why the complication is.

“The Joshua deal was simple. At the time, I was with Eddie [Hearn]. It’s hard to say. Doing a deal now with Joshua at this stage in my career might be as difficult as doing a deal with Tyson Fury,” said Whyte when asked who would be the easier guy for him to do a fight with between Joshua and Fury.

“Years ago, it was easy because we both wanted something from each other at the time,” Whyte said about his fight with Joshua in 2015. “Right now, I can’t say it’s easier or harder at the moment. 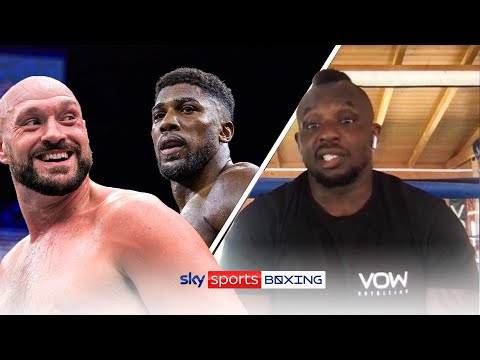