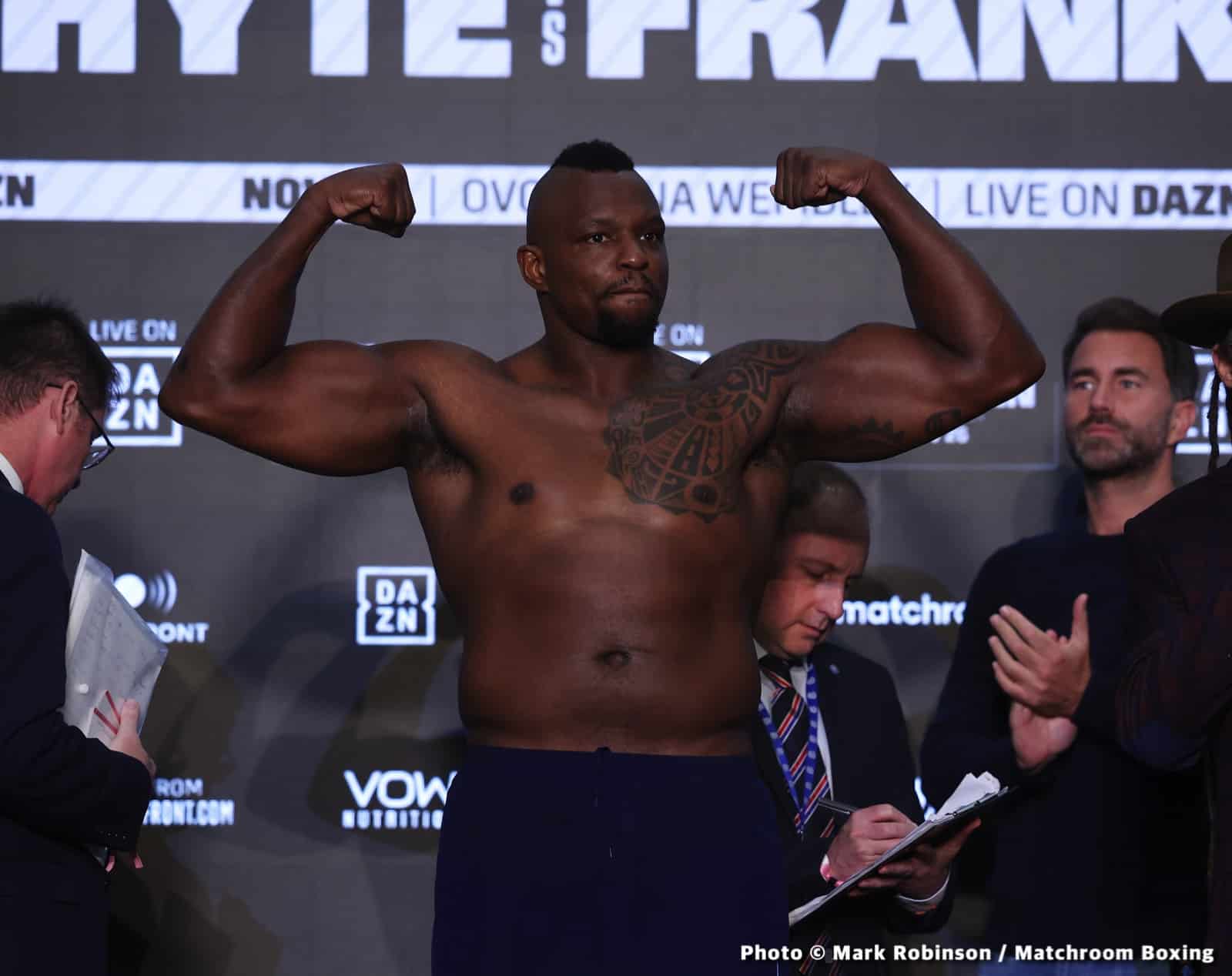 Eddie Hearn likes what he’s seen of Dillian Whyte this week in his interaction with Jermaine Franklin ahead of their fight this Saturday night on DAZN at the OVO Arena in London, England.

Hearn feels that Whyte (28-3, 19 KOs) wasn’t usually aggressive self for his last fight because Tyson Fury befriended him in the build-up to the fight, resulting him not performing at 100%.

For Saturday’s fight, Whyte has looked angry, like his old self, and Hearn expects him to go out and score a knockout of the unbeaten Franklin (21-0, 14 KOs) in their headliner, live on DAZN.

Obviously, it helps that the 34-year-old Whyte isn’t facing one of the talented heavyweight contenders because that improves his chances of winning the fight.

Franklin is a good fighter, but his opposition has been atrocious during his short seven-year professional career. His best win, a 10 round split decision over journeyman Jerry Forrest in 2019, was a questionable one.

If Whyte fails to win on Saturday, it might be time for him to consider retirement because if he can’t beat a fighter on the level of Franklin, it’s a red flag that he no longer has the ability to compete in the division.

Whyte was never a great fighter, to begin with, as he’s looked shaky in many of his fights, even against marginal fighters like Mariusz Wach, Oscar Rivas, and Robert Helenius. 40-year-old Alexander Povetkin knocked out Whyte in 2020 and probably would have done it again if not for him getting a bad case of COVID-19.

The winner of Saturday’s Whyte vs. Franklin fight will get the chance to fight Anthony Joshua in the first half of 2023, according to Hearn. We’ll see if Hearn is serious about that because there’s a good chance that if Franklin wins, he’ll be stuck fighting Whyte again rather than be given a fight with Joshua.

“Mind games. I think [Jermaine Frank’s trainer] Jesse Addison wanted to get into the mind of Dillian Whyte, and I think he got there in the end,” said Eddie Hearn to iFL TV about the final press conference.

“I think he wanted to say, ‘You’re a wounded lion, you’ve been knocked out, and we’re going to knock you out again.’ And obviously, [Franklin’s promoter] Dmitry Salita piped up in the head-to-head, and Dillian Whyte was ready to go with everybody.

“He’s brought that out. Beef, yeah. Borderline beef, but it’s a good fight. It’s a massive fight for Whyte, and this kid can really fight, Jermaine Franklin and Dillian Whyte is going to need to be ready to go on Saturday.

“I’m glad; I want Whyte to be fired up for this fight. I don’t want him to be chilled. Tyson did a great job of befriending him, like you said at the weigh-in, cuddling him, and all this stuff.

“Dillian Whyte has left the building and wants to do a job on Jermaine Franklin and, by the way, his entire team as well. That’s the Dillian Whyte that makes him the fighter he is. You don’t want to get in the ring and f**k with him.

“He’s a nightmare, but he didn’t show that against Tyson Fury, but Tyson Fury is a great fighter. Go in there on Saturday night and take this guy out. Make it a street fight if you want. Whatever you have to because that way, you might be unbeatable.

“That was never going to kick off in a violent way, but let them talk. The security did a good job. I was like, ‘Guys, alright.’ They were trying to usher everybody out. I was like, ‘Whoa, whoa, whoa. It’s good for the views.’

“But again, that’s what we want to see. We want it to mean something, and it clearly means something because it’s a very important fight for his career,” said Hearn about Whyte. 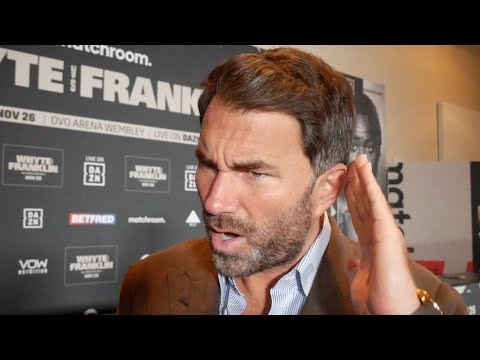