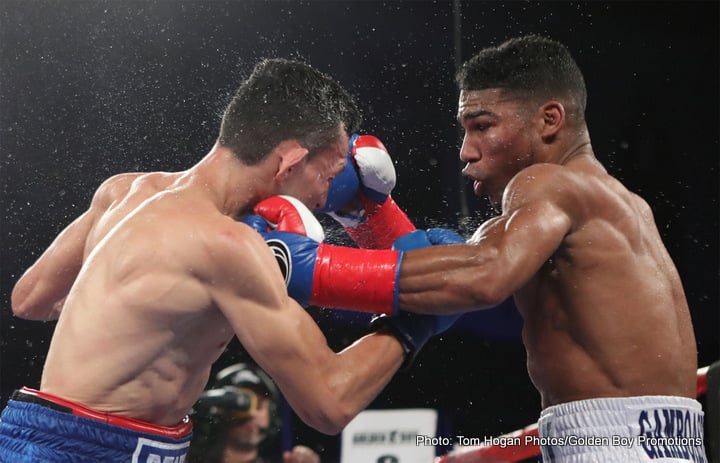 Cuban talent and one-time pound-for-pound star Yuriorkis Gamboa returned to the ring on last night’s David Lemieux-Curtis Stevens card in New York, but unlike the main event, Gamboa’s decision win over Rene Alvarado failed to electrify the crowd. Boxing for the first time since December of 2015, former featherweight king Gamboa had to make do with a reasonably wide ten round UD.

Now aged 35 and a Golden Boy fighter, Gamboa improved to 26-1(17) but he failed to impress; even suffering a flash knockdown late on in last night’s bout. Gamboa had been hoping for a big fight with reigning WBO super-featherweight champ Vasyl Lomachenko (and probably still is) but it’s unlikely the Cuban defector did much to increase his chances.

Gamboa looked good in bursts, but he had trouble getting his punches off and he was caught far too many times (a common theme in even the peak Gamboa’s fights) and, had he been in with a bigger puncher, he might have been in trouble. Okay, Gamboa was no doubt suffering from a good deal of ring rust – last night’s fight was just his fourth since the summer of 2013, Gamboa being forced to endure long layoff periods due to contractual issues and disputes – and he was fighting in the wrong weight class at 135 pounds.

If he can still make the super-featherweight limit effectively, Gamboa might have a chance against Lomachenko, but the critics will not agree. Against the peaking Ukrainian, Gamboa wouldn’t be giving away too much in height or reach, but what about speed and timing? Gamboa, judging from last night’s fight and performance, needs at least one or two more fights so as to sharpen up his once formidable skills.

Of course Gamboa would raise his game if he were to get in there with Gamboa, but if his other recent (ish) big fight with Terence Crawford (granted, this was up at lightweight, not 130) tells us anything, Gamboa’s best days have passed and Lomachenko would beat him.

There are worse fights out there for the former amateur all-time great known as “Hi-Tech,” but the Gamboa who went in against Alvarado, 24-8(16) didn’t exactly make fight fans demand that Lomachenko get it on with him. Has Gamboa, once a seeming sure-thing for greatness, left it too late?