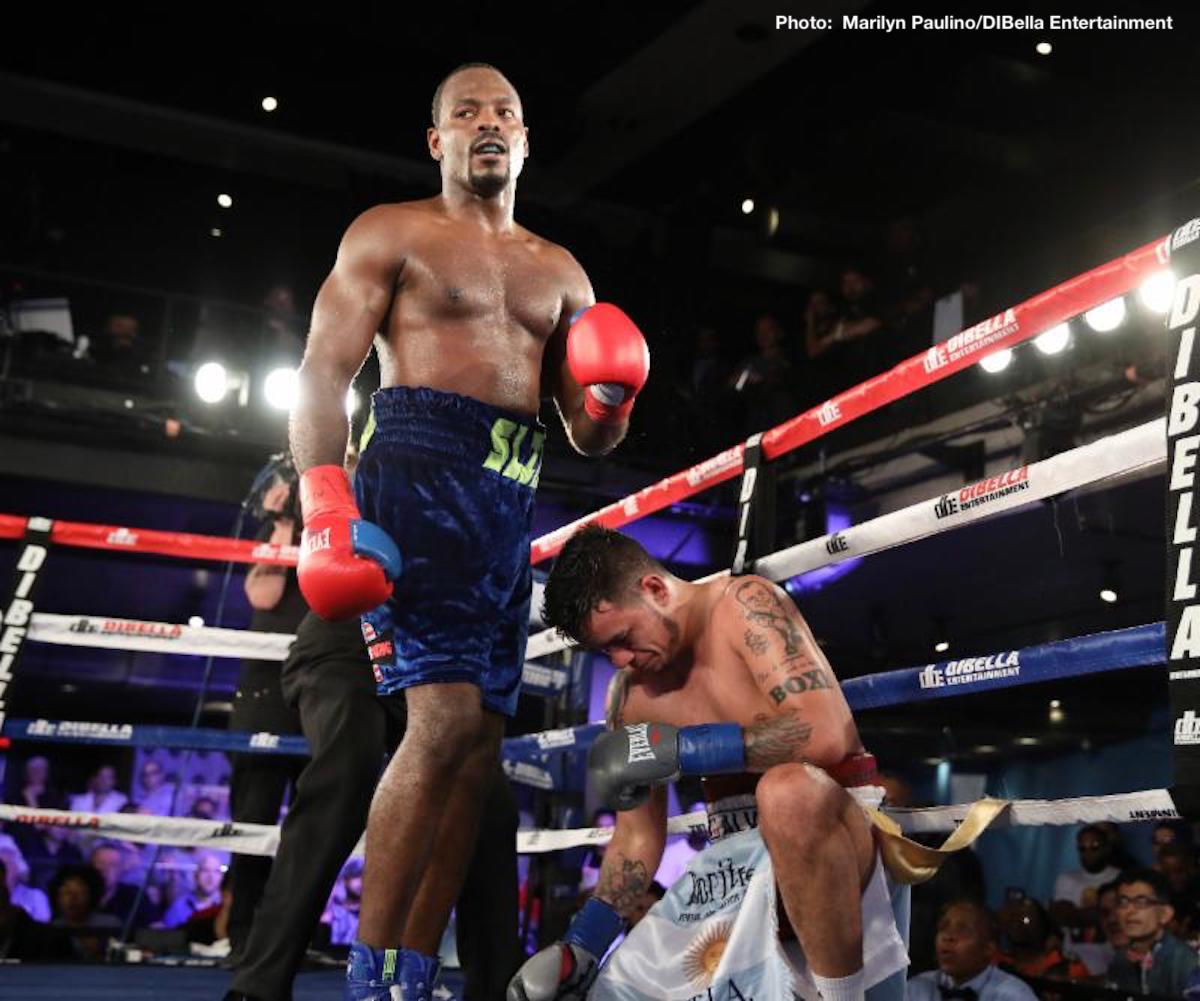 In the main event, Brooklyn’s Mikkel Lespierre, 144.2, expertly picked apart and gradually broke down Gustavo Vittori, 146.6, of Concordia, Argentina. Though Vittori came out aggressively to start the bout, LesPierre kept him at a distance looking to create openings for his straight left. Soon he was landing that punch along with combinations and countering well. A left uppercut to the body dropped Vittori in round two. The Argentinean stayed in front of LesPierre all night, but did not show any head movement, leading to a session of target practice for the local southpaw. LesPierre’s body shots continued to hurt Vittori and he began to wear down. A right uppercut stunned Vittori in the fourth. LesPierre scored a second knockdown in round six with two rights to the body followed by a left hook upstairs. Early in the seventh, another barrage of shots brought Vittori to his knees and the referee immediately waved off the contest at the 0:38 mark. Vittori will return home with a 20-4-1 (11 KOs) record. In his best performance as a pro, LesPierre, now 20-0-1 (9 KOs), demonstrated that he is ready to take on world class opposition. Born in Trinidad and Tobago, LesPierre moved to the US at age six and was raised in the Flatbush neighborhood of Brooklyn, NY. He is trained by Don Saxby out of Gleason’s Gym.

Brooklyn’s Jude “King Zar” Franklin, 127, also a Gleason’s Gym fighter, trained by Elmo Serrano, got off to a quick start, decking Mexico City’s Enrique Aguilar, 130, in the opening round with a straight right upstairs. Throughout the contest, much of Franklin’s offense was focused on the body. Aguilar tried to retaliate with his own attack to the midsection, though Franklin deftly blocked those shots with his elbows and forearms. In round four, Franklin unleashed a torrent of blistering shots downstairs, which resulted in Aguilar unable to come out of his corner for the fifth stanza. The popular Brooklynite upped his record to 8-0 (7 KOs) with the TKO stoppage. Despite his lopsided record, Aguilar, now 8-15 (1 KO), had never before been stopped.

In a wild and bloody brawl that lasted just five-and-a-half minutes, former WBC world lightweight champion Dejan Zlaticanin, 135.4, of Podgorica, Montenegro, was shockingly upset by Tijuana, Mexico’s Robert Ramirez, 135.8. Zlaticanin applied pressure in round one but was tagged by uppercuts on his way inside. Montenegro’s first boxing world champion retaliated, creating exciting exchanges. A left uppercut-right hand combination from his much taller foe felled Zlaticanin early in the second. With Ramirez intent on doing damage and throwing a combination, Zlaticanin landed two left hooks that badly staggered and nearly dropped the Mexican. Moments later, a series of overhand rights and right uppercuts put Zlaticanin on the deck once more and the referee halted the contest at the 2:32 mark. Losing for the second time, Zlaticanin, 23-2 (16 KOs), suffered a broken jaw and broken nose. Ramirez, now 18-2-1 (13 KOs), earned his fifth straight victory following a TKO loss to Abel Ramos in 2015. His only other defeat came to former world title challenger Carlos Ocampo via split decision in 2013.

Highly touted female prospect Raquel Miller, 159.8, of San Francisco, CA, impressed in her DBE and New York debut, unloading her arsenal on the very gutsy Hungarian Szilvia Szabados, 154.8, of Miskolc, for six one-sided rounds. Though she was hurt and wobbled on occasion, Szabados, a former world title challenger, showed tremendous heart and never hit the canvas. Miller, clearly the physically stronger boxer, continued to batter her outgunned foe with stiff jabs, right uppercuts, combinations to the body and counterpunches en route to a shutout win on three tallies of 60-54. Szabados, who has shared the ring with Claressa Shields, Alicia Napoleon, Layla McCarter, and Nikki Adler, saw her ledger drop to 17-12 (8 KOs). Managed by David McWater’s Split-T Management, Miller turned pro in May 2016 and is now 6-0 (3 KOs). As an amateur, Miller was a 2012 National champion, a silver medalist at the 2012 Women’s World Championships, and a 2012 Olympic Team Alternate. She also won the Colorado Springs Golden Gloves tournament in 2013 and won gold at the National Police Athletic League tournament in 2014.

In his New York debut, three-time Puerto Rican National Boxing team member Jose Roman, 149.6, of Bayamon, Puerto Rico, kept the pressure on southpaw Marcus Beckford, 151.4, of Patchogue, NY, for six frames, landing stiff jabs and attacking the body whenever he had his foe trapped against the ropes. As the rounds wore on, Roman began to find a home for his overhand right, using that weapon with increasing regularity. Though he was getting outworked, the game Beckford fought back well in the final three minutes. Three identical scorecards of 59-55 awarded the unanimous decision victory to Roman, now 6-0 (3 KOs), while Beckford’s record dipped to 5-9-3 (1 KO).

Tickets starting at $50 may be purchased online at www.MelroseBallroomNYC.com or by clicking HERE. The Melrose Ballroom is located at 36-08 33rd Street, Astoria, NY 11106. Doors on the night of the event will open at 6:00 PM with the first bell at 7:00 PM. Broadway Boxing is presented by Nissan of Queens, Azad Watches, OPTYX, Christos Steak House and Gagliardi Insurance.

Boxing fans can also catch all of the action on the new DiBella Entertainment streaming home, LIVE.DBE1.com, for a cost of $6.95.

“I’m thrilled to bring the Broadway Boxing series to Melrose Ballroom in Queens, right on the border of Astoria and Long Island City. It has a very intimate atmosphere and is easy to get to from Midtown Manhattan,” said Lou DiBella, President of DiBella Entertainment. “I am a strong supporter of women’s boxing and this card will showcase two excellent women’s bouts. Coming off her world title victory and a subsequent PR campaign which included multiple television appearances, Long Island’s WBA world super middleweight champion Alicia Napoleon will return to the ring. San Francisco’s unbeaten Raquel Miller, a Golden Gloves champion who fought Claressa Shields in a hotly contested battle as an amateur, will make her DBE debut. Highly touted Uzbekistan Olympian Bakhodir Jalolov, a massive heavyweight that will be a future threat to the top contenders, will look for another impressive knockout, and his teammate Elnur Abduraimov, also an amateur standout, will make his pro debut. Former lightweight world champion Dejan Zlaticanin, the first Montenegrin to win a world title, continues on the road back to the top of the division. Brooklyn will be well represented with Mikkel LesPierre matched very tough in a welterweight main event, and the popular heavy-hitting Jude Franklin will bring out his legion of fans. Puerto Rican brawler Jose Roman will also make his New York debut.”

In the main event, Brooklyn’s Mikkel “Slikk Mikk” LesPierre will compete in a scheduled 10-round welterweight bout. Sporting an undefeated record of 19-0-1, with eight knockouts, LesPierre won the WBC USNBC Super Lightweight title in his last start, a fantastic 10-round decision against then-undefeated Noel Murphy on February 7, in New York City.

WBA World Female Super Middleweight Champion Alicia “The Empress” Napoleon (9-1, 5 KOs), of Lindenhurst, Long Island, NY, will make her first start since winning her world title, in an eight-round bout. On March 3, at Barclays Center, Napoleon was victorious with a 10-round unanimous decision versus then-undefeated Femke Hermans, who now holds the WBO 168lb. title.

Fighting out of Brooklyn, NY, 23-year-old undefeated junior lightweight Jude “King Czar” Franklin (7-0, 6 KOs) will compete in a six-round bout. The heavy-handed Franklin is coming off his career-best victory; a second-round knockout of Floriano Pagliara on February 7, in New York City.

Newly signed to DiBella Entertainment, massive heavyweight Bakhodir Jalolov (1-0, 1 KO), of Sariosiyo, Uzbekistan, will be featured in a six-round clash. Jalolov represented Uzbekistan at the 2016 Olympic Games in Rio de Janiero, Brazil, and compiled an amateur record of 84-13, winning four National Championships from 2013 to 2016. Standing six-and-a-half feet tall, the 23-year-old Jalolov had the distinguished honor of being Uzbekistan’s flag-bearer at the Opening Ceremonies of the 2016 Olympic Games. He successfully turned pro on May 5, with a stunning third-round knockout of previously undefeated Hugo Trujillo at Foxwoods Resort Casino.

Making his professional debut in a four-round lightweight bout is Elnur Abduraimov, of Chirchiq, Uzbekistan. A standout amateur with a record of 195-20, the 23-year-old Abduraimov was a five-time National champion and a gold medalist at the 2015 World Championships.

Both Jalolov and Abduraimov are co-promoted by DiBella Entertainment and Fight Promotions Inc. and are trained by the renowned Pedro Diaz and Ravshan Khodjaev in Miami, FL.

Unbeaten female middleweight prospect Raquel Miller (5-0, 3 KOs), of San Francisco, CA, will make her DBE and New York debut in a scheduled six-round contest. Managed by David McWater’s Split-T Management, Miller turned pro in May 2016. As an amateur, Miller was a 2012 National champion, a silver medalist at the 2012 Women’s World Championships, and an Olympic Team Alternate, having competed in the 2012 Olympic Trials. She also won the Colorado Springs Golden Gloves tournament in 2013 and won gold at the National Police Athletic League tournament in 2014.

“I am so proud to have signed Tiara Brown,” said Lou DiBella, President of DiBella Entertainment. “She is a terrific fighter and an even better person. Tiara is a fulltime Washington, D.C. police officer, a mentor to kids and teens, and a true role model. She is another example of the strong, empowered women boxers who deserve to have their platform.”

“I’m so honored to be working with Lou and his team,” said Brown. “He works from his heart, especially for his female fighters and I felt great being around him. He’s had a great amount of success with numerous female fighters and, given his track record, this is a perfect fit for me.”

A three-year veteran of the Washington, D.C. Metropolitan Police Department working in the Sixth District, Brown has the full support of her fellow officers who regularly attend her fights.

“The police department and the Chief of Police, Peter Newsham, are big supporters of mine and I look forward to putting on another show for them on June 30,” said Brown. “I’m here to make an impact on my weight division and fight top contenders as soon as possible.”

Brown will return to action on Friday, June 30, in Washington, D.C. against Carla Torres in the main event at the Sphinx Club.