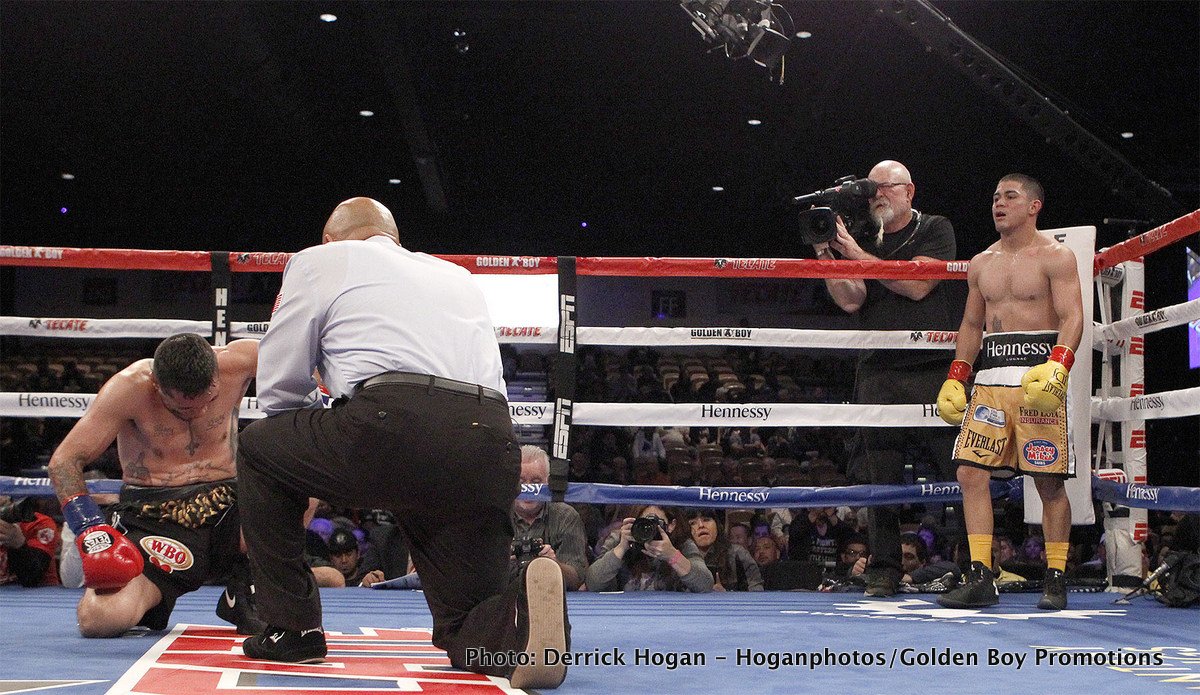 Joseph “JoJo” Diaz (26-0, 14 KOs) successfully defended his NABF and NABO Featherweight Titles with a dominant third-round knockout victory against former world champion Victor “Vikingo” Terrazas (38-5-2, 21 KOs) in the main event of the Feb. 22 edition of Golden Boy Boxing on ESPN at Fantasy Springs Resort Casino in Indio, Calif. After dropping Terrazas twice in the first round, Diaz, Jr. continued punishing Terrazas to the head and body before finishing the fight with a left hook at 3:00 of the third round. Diaz, Jr. maintained his status as the No. 1 contender for the featherweight championship of the world with this impressive victory.

“Gary Russell, Jr.: You’re next,” said Diaz, Jr. “I’m ready to have that world title around my waist. Once I defeat him, I’m going to give the fight fans what they want to see: champions against champions. Victor Terrazas is a tremendous warrior. I thank him for the opportunity because of all the experience he brought to the ring. He’s a strong veteran and I wish him all the best.”

“I’m going to speak with my wife and kids,” said Terrazas. “After all, they’ll be the ones to inform me if I should continue my career or end it tonight. I feel like I’m at the end of my career. It may be time to enjoy my wife and kids and find luck in another profession.”

“I feel really good,” said Ortiz, Jr. “I dropped him in the first round with a right hand because he kept pulling straight back. I liked that he got up because he was able to give me more rounds. My dad was telling me to work the body. I really started doing it in the third round and it showed. Now it’s time for me to keep working hard so I can be ready to fight again in a few months.”

“I had an excellent training camp,” said Perez. “The team did something different this time. We thank Coachella Valley Boxing and Luis Espinoza for their hospitality. I don’t know what’s next for me, but I’ll be ready for what comes.”

Genaro “El Conde” Gamez (7-0, 5 KOs) of San Diego, Calif. scored a technical knockout victory against Miguel Mendoza (23-14-2, 11 KOs) of Aguascalientes, Mexico at the end of the fourth round of a scheduled eight-round super lightweight fight.

“I had a lot of fun in there,” said Gamez. “I was just playing with him in there in the ring and wanted to get rid of him by the later rounds. I can’t wait to fight again.”

Super Featherweight prospect Hector “El Finito” Tanajara, Jr. (12-0, 5 KOs) of San Antonio, Texas scored a first-round knockout victory against the Mexican pugilist Eduardo Rivera (10-4-2, 4 KOs). Tanajara, Jr. wasted no time in landing a lead right uppercut that immediately hurt Rivera, which he followed with a flurry that ended matters at 1:58 seconds of the first round.

“I wanted to switch it up because I was throwing the right hand a lot,” said Tanajara, Jr.”So, I threw the lead uppercut and I hurt him. I had to be cautious before going for the finish because some fighters play it off, but either way I got the first-round knockout. I’m going to stay in camp and get ready for the next fight.”

“Even though he wouldn’t go down, I had to keep trying,” said Robles III. “I knew I had to keep working the body and get the knockout. Hopefully I can move to 10-round fights this year. After this, things will just get tougher as I move up the rankings.”

Diaz, Jr. vs. Terrazas was a 10-round fight for the NABF and NABO Featherweight Titles presented by Golden Boy Promotions. The event was sponsored by Tecate, “THE OFFICIAL BEER OF BOXING” and Hennessy, “Never Stop, Never Settle.” The fights took place on Thursday, Feb. 22, 2018 at Fantasy Springs Resort Casino. 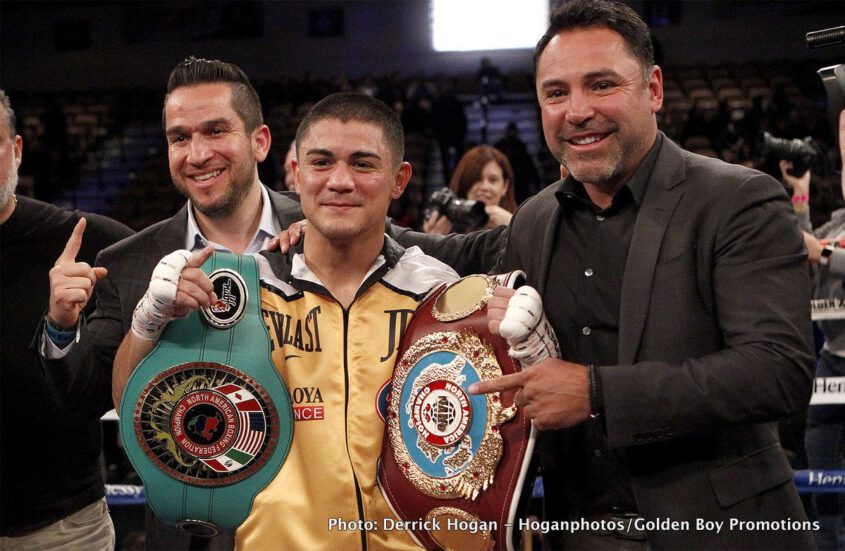 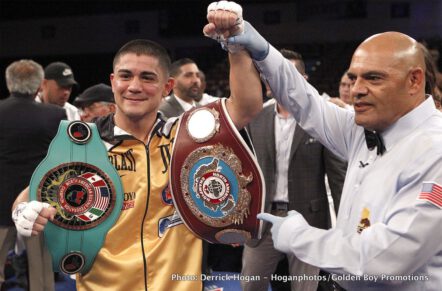 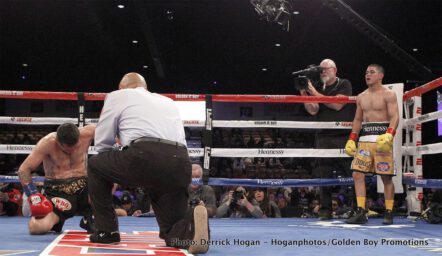 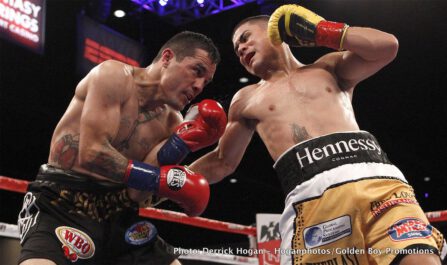 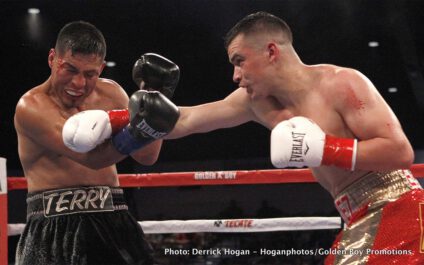 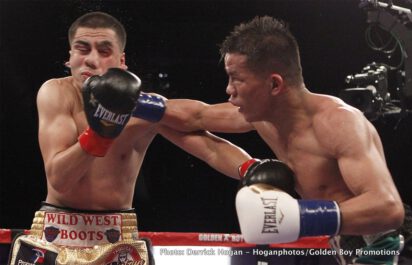 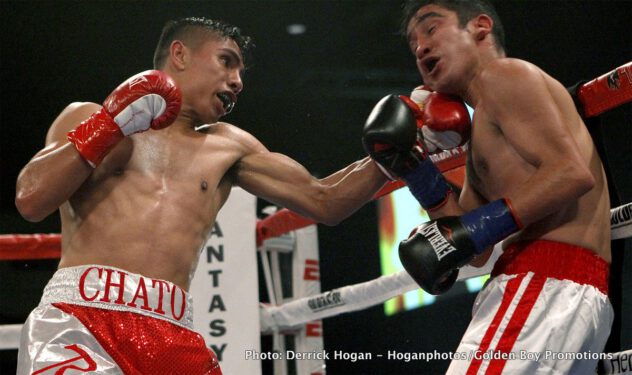 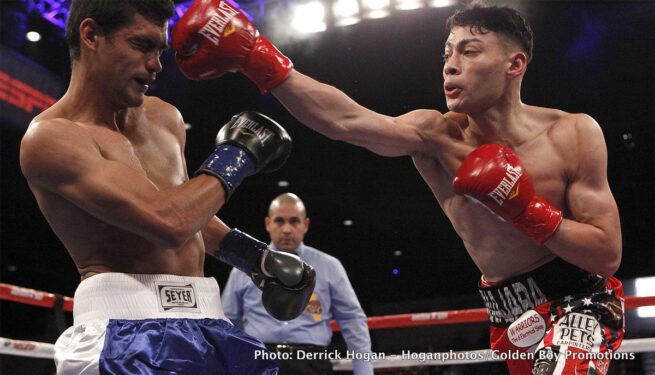 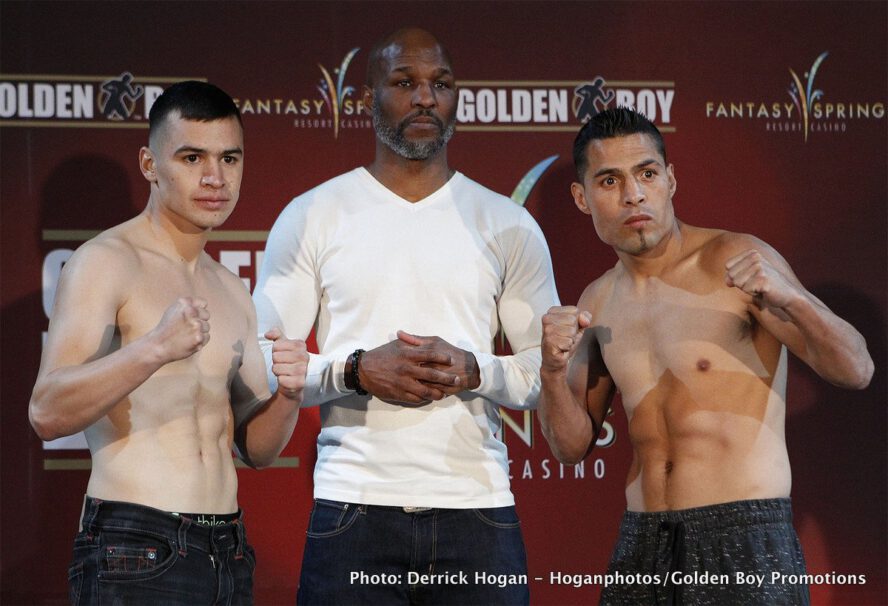 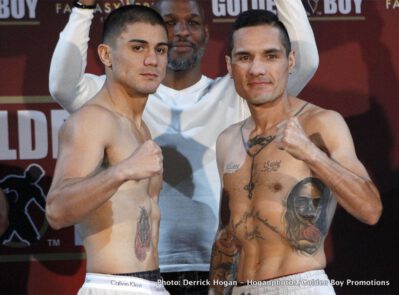 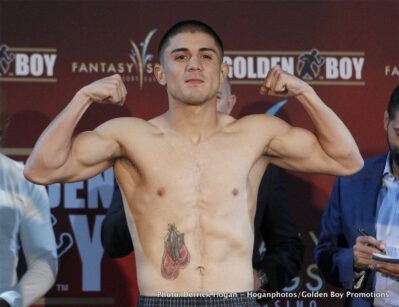 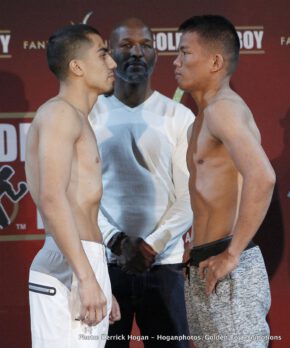 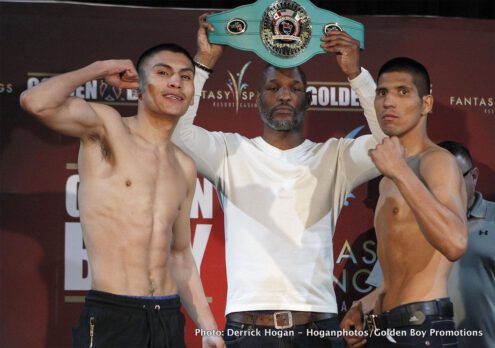 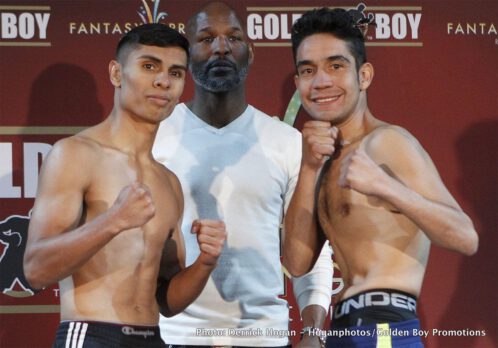 Here’s what today’s participants had to say at the media workout:

“I’m going to showcase my power, speed, experience and ring intelligence. I know [Victor] Terrazas is a former world champion, but my skill is the best at 126 pounds. I’m excited to headline this fight because I’ll be kicking off the year for Golden Boy Boxing on ESPN. I’m going to take advantage of this and put all the champions at featherweight on notice. Hopefully after this fight, I’ll finally get that world title shot.”

“I’m still in my prime. I feel I still have a lot to give. This is an important fight not just for me, but for Joseph Diaz as well. I’ve been training hard in Mexico with my coach, Alejandro “La Cobrita” Gonzalez, and I’ve been having really good sparring as well. I have a lot of experience dealing with world-class fighters and quick southpaws, so it will be a battle of youth vs. experience on February 22.”

“I’ve been working on sitting on my punches and working on the inside. In this camp, I’ve been working with former fighter Rudy Hernandez and getting great sparring as well. Fans can expect to see a different Manny Robles next Thursday. I’ll be more aggressive and I’ll be more affective on the inside. If I see the opportunity, I’ll get the knockout.”

“Would I be a ‘Guru’ if I told you that I’d start the year off sensationally? I’m not fighting the toughest opponent of my career, HE is. At the end of the day, we’re all in the hurt business.”

“I’ve been working really hard since my last fight. No matter who I fight, I’ll be ready to knock him out. It’s been great training with Robert Garcia. There are a lot of world champions in our training camp, and I learn a lot every day. I expect to be busy this year in exciting fights and fighting more rounds.”

“Training camp has gone really well, and I’m really focused for this fight. I know my opponent has had tough fights and that he’s a warrior. This year I hope to demonstrate to all who Genaro ‘El Conde’ Gamez is. The lightweight division is very tough, and every fight features with quick punchers. Don’t go on a bathroom break during the fight because you might miss the knockout!”

Diaz, Jr. vs. Terrazas is a 10-round fight for the NABF and NABO Featherweight Titles presented by Golden Boy Promotions. The event is sponsored by Tecate, “THE OFFICIAL BEER OF BOXING” and Hennessy, “Never Stop, Never Settle.” The fights will take place on Thursday, Feb. 22, 2018 at Fantasy Springs Resort Casino. Doors to the Special Events Center open and the first televised bout begin at 5:00 p.m. PT. ESPN2 and ESPN Deportes will air the fights beginning at 11:30 p.m. ET/8:30 p.m. PT, and stream live on ESPN3 starting at 10:00 p.m. ET/7:00 p.m. PT.

Tickets for the event start at $25 and are available at the Fantasy Springs Resort Casino box office, by calling 1-800-827-2946, or by purchasing online at www.fantasyspringsresort.com.