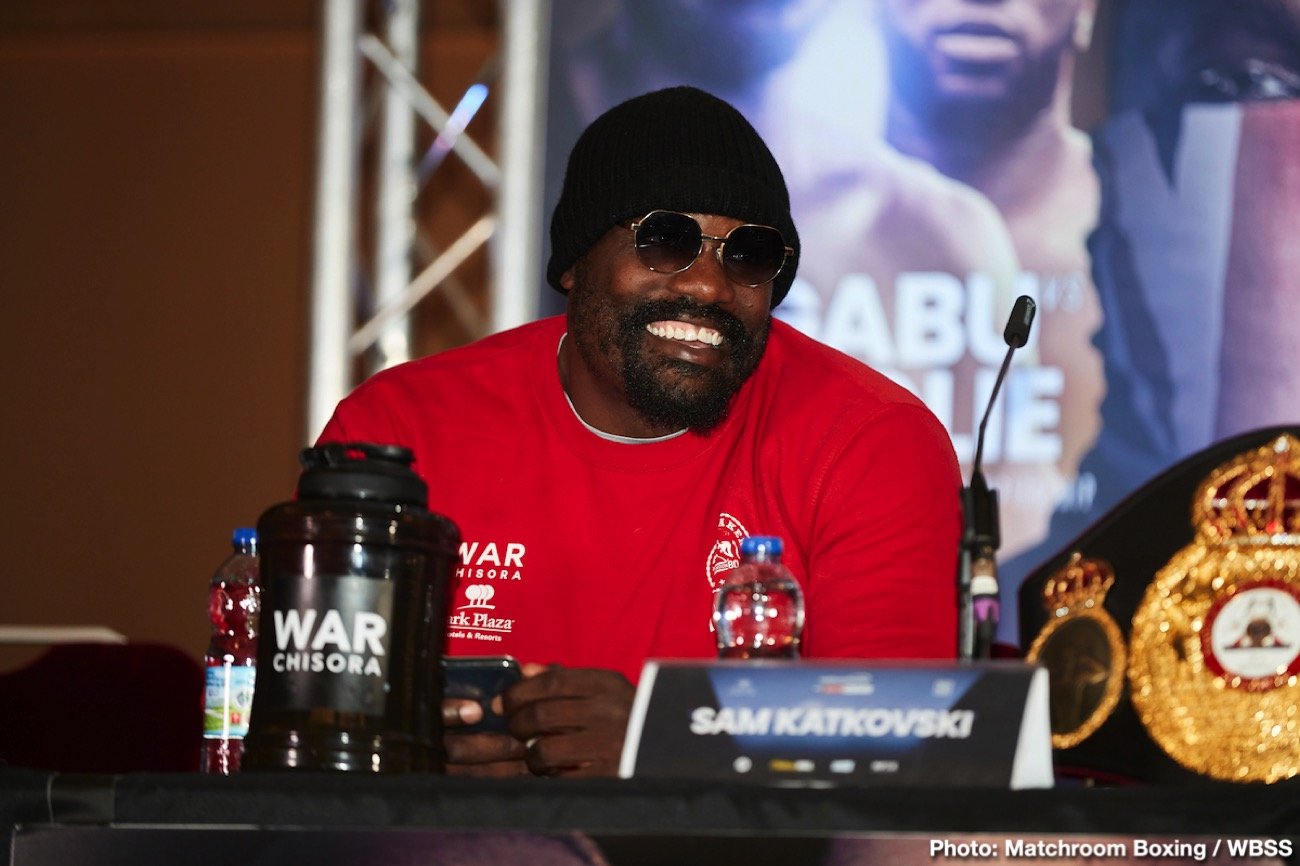 Heavyweights Dereck Chisora and Joseph Parker recently met for their Face to Face to discuss their match next month on Sky Box Office and DAZN on October 26 at the O2 Arena in London, England.

Chisora (31-9, 22 KOs) made it clear that he wants the fight to be a war, but he thinks Parker (26-2, 20 KOs) is going to wind up running all night long. Dereck expects former WBO heavyweight champion Parker to fight defensively for 12 rounds like he did in his losses to Dillian Whyte and Anthony Joshua. Both of those fights took place in England, and now he’s coming back for a third time. Chisora sees Parker getting the same results with him losing once again.

Chisora-Parker are the chief support on the Regis Prograis vs. Josh Taylor card.

Here’s what the two fighters had to say on Face to Face about their October 26 clash:

Parker: “The way I see it you’re going to come forward and do what you got to do, throw your big shots, and wind them up, and I’ll box you, beat you up, and catch you. That’s how I see it very clear. I’ve never had a problem with fitness.

Chisora: “That’s a lie, bro. In the AJ fight you chocked. When you’re not fit, you start chocking. When you’re fit, you know you have the engine, so you don’t care what happens. If you’re not trained, you start to fight on the backfoot and use different skills you didn’t use before.

Parker: That’s his opinion. You started to fade in the Dillian Whyte fight. If you were fit enough, you could have gotten back up.

Chisora: He caught me with a good left hook. I’m not taking that away from the guy. On top of that, I was fighting three people. I was fighting the ref, the promotion and the judges. Two points were taken. In my mind, I’m so far behind. I didn’t want to leave it to the judges.

Parker: I’m a little concerned with the judges in England.

Chisora: I bought them.

Parker: I’m sure you did. Hopefully, we can have neutral officials so that everybody is fighting on an even playing field.

Chisora: You’re coming to my house, and my ref and my judges. Mine, mine, mine and mine.

Chisora: I’m not afraid of losing a fight. What I am afraid of is one day walking into the ring, and there are no fans cheering me. That’s the only thing I’m scared of. I don’t care about losing or winning. I just care about those guys that by the 200 and 300 pound tickets that come to watch Dereck Chisora. That’s it.

Chisora: When he comes to the big pond, he can’t produce the goods. He had his chance, and he didn’t do anything.

Parker: That thinking is different from smart fighters.

Parker; we were doing pretty good. He [Joshua] established his jab, and he used his reach pretty good. It was better than I thought he would.

Chisora: You know what I say? He wasn’t ready to eat leather.

Chisora: That’s why he has to fight here, because his own people realize this guy is a fraud star.

Parker: The idea is to not get hit, but he wants to get hit all the time.

Chisora: You’re fighting to be number one, and you choose not to eat leather.

Parker: We tried our best.

Chisora: Were you fit? You were not fit.

Chisora: We’re definitely going to take him to war.

Parker: If he’s ready for war, we’ll go to war. We were ready to fight him four years ago to bring him to New Zealand. It took him a while to exercise the contract. We were waiting for you.

Chisora: The last two fights in England, you chocked. I’m crazy. He doesn’t have anything to bother me. I’m willing to eat leather to get to him.

Parker: And you will [eat leather].

Parker: I’m going to out-box him, and catch him.

Chisora: This guy has never liked to fight. He likes to box on the back foot, and run away.

Parker: That’s the thing. I can box and I can fight. he can’t box. He can only fight.

Parker: That’s the only thing he can do, and he’s really not that good anyways.

Chisora: Guess who’s coming to London to fight me, and I’m not that good.

Parker: I’m coming to London. I’m going to your back yard, because I don’t care where it is.

Chisora: You can’t sell in your own country. I don’t want to come to Australia. What’s wrong with you?

Chisora: The reason why he’s traveling now is because his own people realize that he’s been selling them bull-s— for the last four or five years. They’ve had enough of buying tickets to watch this guy fight.

Parker: Every time I fight at home, people always support. If you were in front of us that day, I’d have beaten you up as well. I think he’s calmed down a lot. He’s done a lot of crazy things at press conferences and weigh-ins.

Chisora: I don’t mind being a gatekeeper. Give me the golden key. I don’t mind. Here’s the part you don’t understand. You’ve got Deontay Wilder, Andy Ruiz and Tyson Fury. But guess what? Tyson Fury and Deontay Wilder are locked in for two fights for the next two years. Andy Ruiz and Joshua are going to be fighting again after this fight. They’re going to have a rematch. Who’s the world champion right now? Who’s the #1 right now? You can go down the road and ask who’s the world champion right now. They don’t know, because there are so many belts. Stay busy, make money,” Chisora said when asked what his goal is. “You beat Andy Ruiz, didn’t you? You didn’t beat him. You robbed him. You run away again.

Chisora: No. I want to beat you.

Parker: Oh come on. You’ve had some good wins. Let’s get you in there, and I beat you and move on to the next one.