Trainer Abel Sanchez thinks Sergey Kovalev has a shot at beating Saul Canelo Alvarez if he listens closely to what his trainer Buddy McGirt tells him, and follows his directions to the letter for his fight on November 2. Kovalev (34-3-1, 29 KOs) is defending his WBO light heavyweight title against the smaller 5’8″ Canelo Alvarez (52-1-2, 35 KOs), who will be moving up two weight classes for the fight.

Canelo-Kovalev will be streamed LIVE on DAZN on November 2 at the MGM Grand Garden in Las Vegas, Nevada.

Sanchez notes that Kovalev, 36, hasn’t listened to what some of his past coaches have told him, and he thinks he’s going to have problems with Canelo’s speed and overall boxing skills. Abel sees Canelo stopping Kovalev in rounds 7 through 9.

“He was in my gym for a year and a half,” said Abel Sanchez to Fighthub about Kovalev. “I think that’s a difficult fight for Sergey. I think Canelo will be too fast for him, and I think Canelo will go to the body. He’s a short guy that will get inside and pound Kovalev’s body, and I think sometime between the 7th and 9th rounds, it’s a stoppage. If it was a fresh Kovalev, if it was a young Kovalev, okay that might make a difference. I think today, the Kovalev that we’ve seen; I can say this: the plus now for Kovalev is [trainer] Buddy Mcgirt.

If he can follow Buddy’s game plan, and if he can listen to Buddy, which he hasn’t done with a lot of coaches since he left my gym, if he can listen to Buddy, I think he does well. But if he wants to go in and fight Canelo, Canelo is going to slip his jab, and pound his body. It’s not going to be in the 1st round or nothing like that. But he’s going to wear him down, and punish and punish him, and I think he’ll be too fast for him. Absolutely,” Sanchez said when asked if Canelo can get past Kovalev’s jab.

Kovalev listened to what McGirt was telling him in his last fight against Anthony Yarde last August, and he stopped him in the 11th round. That was a much different looking Kovalev than fans had seen since his fight against Bernard Hopkins in 2014. If Kovalev can fight like that against Canelo, he’ll give him a lot of problems. Canelo needs Kovalev to be stationary the way that Rocky Fielding, and Gennady Golovkin were. Fighters that move give Canelo nightmares. He struggled with the movement of Erislandy Lara and Floyd Mayweather Jr., and arguably lost both fights. Being popular, Canelo was given a controversial 12 round decision win over Lara, but he looked like the loser in that fight.

“Look, Canelo is a heck of a fighter. Canelo has proven in his last four or five fights that he’s matured immensely, said Sanchez. “He’s a heck of a counter puncher. He’s got fast hand, very good feet, and he moves his head well. When he moves his head well, and he can counter punch, it’s going to be difficult for the slower Kovalev. Kovalev being a 175-pounder, and Canelo being a 154-pounder with that kind of speed, that makes a difference. Canelo can’t punch like [Gennady] Golovkin. I’ve had them both. Absolutely, Kovalev is nowhere near the puncher Golovkin is. Golovkin is also a better boxer than Kovalev. Yes, [Kovalev] controlled the fight with his jab in his last fight, but Golovkin is a lot, not only trickier, Golovkin is a lot smarter. Golovkin has a better jab.

“Kovalev might be longer, but it’s a slower jab. If Canelo was able to work off the jab Golovkin was throwing, then he’ll be able to work off Kovalev’s jab easier. No,” said Sanchez when asked if Canelo will have problems with Kovalev. “It’ll be a good fight, but it won’t be difficult. It’s a good fight for Canelo, because he’s moving up to 175. He’s getting a guy that everybody fears. He’s making that dramatic move that nobody likes to make. It’s two weight divisions. I think it’s a great move for Canelo, because he’s getting the right guy,” said Sanchez.

Kovalev may not hit as hard as Golovkin but he hits close enough to hurt Canelo if he can land enough of his shots. It would be a mistake on Kovalev’s part to try and knock Canelo out though, because he’s difficult to hit cleanly with shots. Canelo’s head and upper body movement is top notch. Mayweather created the blueprint on how to beat Canelo by jabbing him, and moving away as he tries to get close to land his power shots.

Canelo’s shorter arms makes it impossible for him to handle a longer-armed fighter when they choose to stay on the outside. Lara did exactly what Mayweather did in staying on the outside against Canelo, and limiting how many shots he could land. Canelo only connected with 34 head shots in the entire fight against Lara. If Kovalev can limit Canelo to the same amount of punches landed, he won’t win apart from a controversial decision.

“I’d hate to see him fight somebody like Caleb Plant or someone like that,” said Sanchez. “That would be faster, fresher, and younger. Kovalev is obviously a bigger puncher than Caleb, but Kovalev is on the darker side of the moon. Canelo has a chip on his shoulder right now. Canelo is going to be difficult to beat. You’re going to have to beat him down to make him think he’s not who he thinks he is. You can kind of see the talent, and the desire to be great when they’re young,” said Sanchez when asked if he saw this coming from Canelo to want to move up to 175 to take on Canelo.

“You could see in Canelo that he wanted to be somebody. He wasn’t backing down from anybody. And he was a 20-year-old kid with big [courage], that wasn’t going to let anybody put it over on him or make him bow down to anybody. Obviously, I never thought he could get to this point. The fact that he became a superstar because of the amounts of money that are being thrown at him, I would have never imagined that. It doesn’t matter to me,” said Sanchez when asked if he has a problem with Canelo fighting Kovalev rather than Golovkin for a third time. “Whatever is best for their career. The Kovalev fight is the best for him,” said Sanchez.

Sanchez didn’t mention the obvious. Canelo clearly didn’t want any part of those guys, because those fighters are bad match-ups for him. It’s one thing for Canelo to take on a fading champion like Kovalev, but it would be a whole different kettle of fish if he were to challenge the likes of Beterbiev or Bivol. It would likely end badly for Canelo with him getting knocked out by both guys, and embarrassed. It’s interesting that Sanchez didn’t point out that out. Canelo obviously knows his limitations. He’s not going to take on guys at 175 that would make him miserable. Beterbiev is an incredible inside fighter with one punch power. You can only imagine what would happen to Canelo once Beterbiev started touching him with shots on the inside.

Canelo vs. Kovalev is good for boxing says Sanchez

“I think the Kovalev fight is a great fight,” said Sanchez. “It’s not that the Golovkin [trilogy fight] wouldn’t be, but I think him doing what very few people would do, I think it’s a good thing. It’s good for boxing. There’s no reason to talk. They made a decision, and they have to live by it,” said Sanchez when asked if he’ spoken to Golovkin recently since he changed trainers.

“I haven’t seen anything,” said Sanchez when asked if he saw Golovkin’s last fight against Steve Rolls. “It’s not that I don’t want to see. I very seldom see any fights. I was just told about the [Tyson] Fury fight a couple of days ago. I’ve seen enough fights where it can last me a lifetime. Unless my guys are involved in it, then I want to see it.

If I’m not going to have nothing to do with it in the future, then I don’t want to see it. There’s no reason to. You’ve got to realize who he had in front of him,” said Sanchez about Golovkin’s last opponent 35-year-old Rolls. “You’ve got to realize that when you have nobody in front of you. Like Tyson Fury, he had nobody in front of him [for his last fight against Otto Wallin] that anybody cared about or he cared about, so he had a difficult time. These guys have to be motivated mentally or they have a heck of a time,” said Sanchez.

Canelo vs. Kovalev is attracting interest, and it is a good fight for boxing. But fans need to realize why Canelo has chosen Kovalev. Some would say this is a classic cherry pick by Canelo in picking an old guy that is in his mid-30s, looking like he’s got very little left. In some respects, it’s similar to how Canelo didn’t fight Golovkin until he was 35-years-old.

“I said this a while back, but what I said wasn’t because of age,” said Sanchez. “It was because of the basic fundamentals it takes. I’m not talking about a jab or a right hand. I’m not talking about any of that. I’m talking about the fundamentals or learning how to win, and doing what’s necessary to win, and to be at that level. The longer you go without doing those things, and I say doing those things, because in the history of my gym, those guys that have had that have excelled and very few gyms in these times have. The longer you go from doing the things that got you there, like those fundamentals, the more difficult it’s going to be,” said Sanchez. 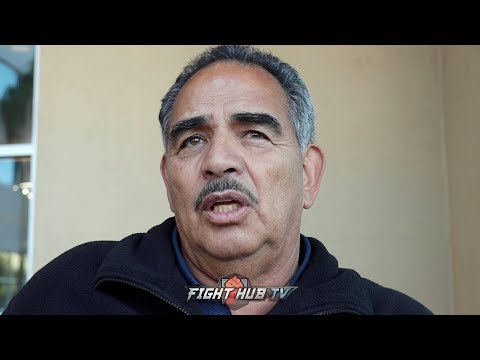