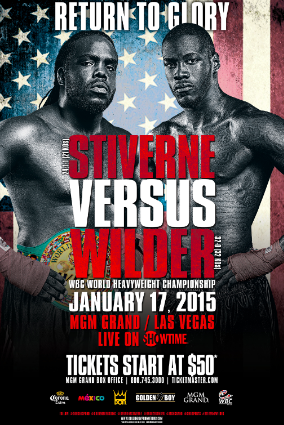 The Bernane Stiverne (24-1-1, 21 KOs) and Deontay Wilder (32-0, 32 KOs) heavyweight clash is only 13 days away before the two large fighters battle it out on January 17th at the MGM Grand in Las Vegas, Nevada. Stiverne, 36, has been pretty quiet in the build up to the fight, as he’s taken a lot of verbal and written abuse from the 6’7” Deontay.

Stiverne’s quite nature comes across to some boxing fans as him being intimidated by the hard punching Wilder. However, Stiverne has always been a quiet fighter, so this is kind of the norm for him. He does his speaking in the ring with his fists rather than talking trash outside of it.

Deontay is so convinced that he’ll beat Stiverne that it’s hard not to buy into him accomplishing the task. Deontay has a big size advantage along with his advantage in hand speed and youth. At 29, he’s seven years younger than the 36-year-old Stiverne. But Stiverne is a young 36, and he doesn’t look to have aged at all since his late 20s. That doesn’t mean Stiverne will win the fight though.

If he gets caught by one of Deontay’s big hands it’s going to be tough for him to weather the storm. Once Deontay has one of his opponents hurt, he’s a furious finisher. He unloads with both hands with huge shots, and it’s next to impossible to survive that kind of an onslaught.

Stiverne is going to need to remember to keep his left hand high in front of his chin, and he’ll need to stay off the ropes if he wants to keep from getting poleaxed by Wilder.

”I’m on a mission to rescue @SophiaTheBelt and become the NEW HEAVYWEIGHT CHAMP!! Join me on my journey #RoadToSophia,” Deontay said today on his Twitter account.

Wilder’s chin is going to be tested in a major way in this fight. We don’t really know how good of a shot that Wilder can take, because he’s been knocking out his woeful opposition so quickly since he turned pro in 2008. Stiverne can take a good shot. If he’s able to survive Deontay’s hard shots long enough to land one of his hard left hooks, we could see Deontay get beaten for the first time in his career.