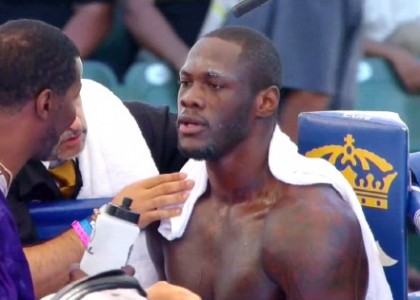 Deontay doesn’t see anything in Stiverne’s fighting style and with his power that will give him any trouble. He doesn’t feel that he needs to study Stiverne any longer after watching his last two fights against Chris Arreola, as says Stiverne does the same things over and over. Deontay doesn’t say what those things are, but it’s likely he’s referring to Stiverne throwing a lot of left hooks, right hands and jabs.

“From seeing him fight Arreola, I’ve already got his style down,” Deontay said to Hustleboss.com. “He doesn’t have a difficult style that I’m going to have to really study. He does the same things, and we already know what he likes to throw. No concerns about no power, and I don’t care about going the distance. I’m very confident I’ll be the best man.”

Stiverne actually has a more complex offense than Deontay does. With Deontay, he’s limited to just his right hand to do all of his work for him. He doesn’t have a good jab, left hook or uppercut for him to use to win fights or bail him out of trouble.

It’s really just Deontay’s right hand that does everything for him. But he has a great right hand and it doesn’t seem to matter that he’s kind of one-dimensional. His hand speed and power is enough with his right hand for him to land it frequently. He’s not met any fighter yet that could nullify his right hand, and it’s going to be up to Stiverne to either take it away or try to bang Deontay out of there before he’s had a chance of connecting with a lot of his best shots.

If Stiverne doesn’t get to Deontay early, he’s likely to get knocked out by him. Stiverne puts himself in harm’s way by sitting on the ropes, and Deontay loves for his opponents to back up against the ropes. Stiverne could knock Deontay out if he times him with one of his left hooks for when Deontay tries and throws a right hand.