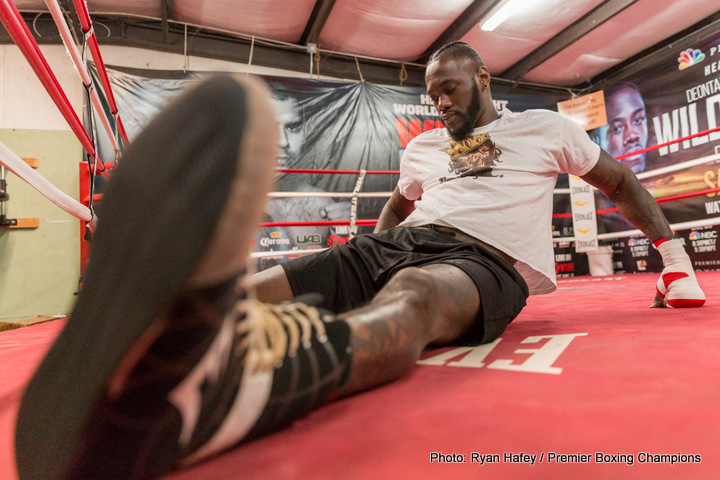 While we fans and the man himself await his next fight, WBC heavyweight champ Deontay Wilder has run into a little bit of trouble. According to a news story in The Tusacaloosa News paper, Wilder was arrested yesterday in his home town.

Pulled over in his car, Wilder’s Cadillac was found to have some marijuana inside. The unbeaten KO artist was arrested and later released on a $1,000 bail. According to Wilder’s attorney, Paul Patterson, the drugs belonged to someone other than Wilder, who had loaned out his car whilst being out of town.

This development is not likely to affect Wilder’s career in any way, but his critics may well jump all over it anyway. Wilder, an exciting power puncher is known as a clean athlete, never testing positive for any illegal substance either before or after a fight. Last fighting in February, when he returned to action following arm and biceps surgery to halt the unbeaten Gerald Washington in 5 rounds, Wilder is now targeting the big, big fights.

It’s certainly time we found out just how good Wilder, 38-0(37) really is. Wilder has said many times how the heavyweight division should have just one, unified champion and he says his will be “the one name” of the division. Can Wilder beat the likes of Anthony Joshua, Tyson Fury b(should Fury actually return to the ring) and Joseph Parker?

Again, it’s time we found out. Let’s hope Wilder can stay out of trouble, in and out of the ring. Regarding Fury, he recently put out a short video on social media, in which he called out both Joshua and Wilder. After that great Joshua-Wladimir Klitschko fight in April – easily the biggest and best heavyweight title fight in years – things seem to have come to a halt. We await confirmation of Joshua’s next fight, and Wilder’s. We also wait and see what unbeaten WBO champ Parker will do next, with talk of a unification fight between the New Zealander and Wilder being quite old news.

Let’s hope it happens. Wilder needs to get his career moving.