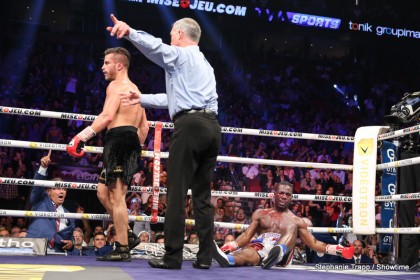 Lemieux charged out at the opening bell and didn’t stop attacking Guerrero until the stoppage, knocking him down in the first, second and third rounds before scoring the knockout.

“I knew Fernando Guerrero is a very strong fighter. Very tough,” said Lemieux. “He’s been down many times and always gets back up. Once I started to land my shots I could see it in his eyes that the game started to change.

“The results in the ring are from my dedication and my training. I want to tip my hat to Fernando Guerrero. He is a great fighter. I studied him for many months prior to the fight. So I am very happy with the outcome.”

“I’m determined to be a world champion. I would love to fight anyone in the world at 160.”

Charlo controlled the bout with combinations and dominated Ohta throughout the fight, overcoming a flash knockdown in the 3rd round, the first of his career.

After the fight, Charlo said that he was not concerned with the knockdown. “To me, I slipped. I didn’t feel the solid shot. He hit me with the right hand. He just caught me off balance. But it is what it is.

“This was a rough one. I did what I had to do tonight.”

In the feature bout on SHOWTIME EXTREME, Julian “J-Rock” Williams (16-0-1, 10 KOs), of Philadelphia, earned a knockout victory over Michael Medina (26-5-2, 19 KOs), of Modesto, Calif., in the eighth round of a 10-round junior middleweight matchup.

Williams landed 64% of his power shots in a commanding victory to further establish himself as a top prospect at 154 pounds.

“It’s interesting to see the Charlo brothers and Williams and all these young American 154-pounders, and to think that one day they will all be facing each other.”

In the opening fight on SHO EXTREME, world-ranked light heavyweight Eleider Alvarez (15-0, 8 KOs), of Montreal by way of Colombia, defeated Alexander Johnson (15-2, 6 KOs), of Washington, D.C., by unanimous decision in a 10-round bout. All three judges scored the fight 97-92.

Conor McGregor: I Won Rounds And Hit Mayweather More Times Than Pacquiao Did When They Fought806 Total Shares

On This Day In 1995: The Legendary Manny Pacquiao Goes Pro311 Total Shares