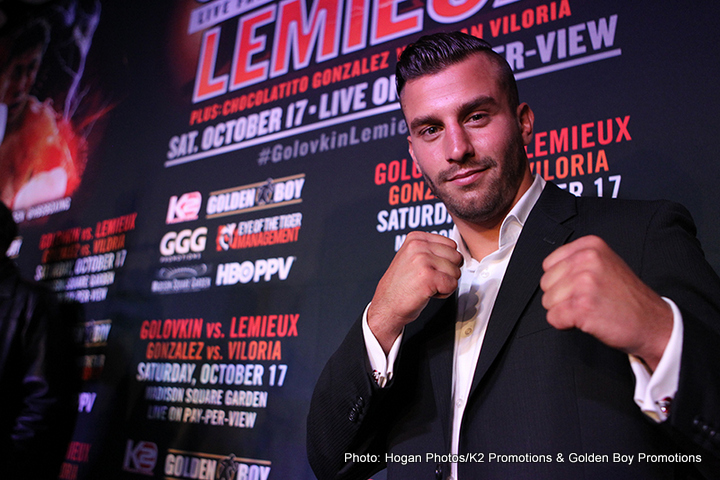 IBF middleweight champion David Lemieux claims he is unconcerned about being the betting underdog when he goes into October 17th’s huge unification showdown with WBA (super) champion, Gennady Golovkin at Madison Square Garden, saying he is ready to ‘shock the world.’

After his thrilling title winning fight in June against France’s Hassan N’Dam, in which he decked the European four times, the big hitting Lemieux goes out of the pan and straight into the fire against Golovkin, one of the most feared fighters P4P in all of boxing at the moment – and certainly the most destructive at 160.

“He is Goliath, I am David, we know how the story is written!,” Lemieux said to fighthubtv. “But all joking aside it’s gonna be a very tough fight, he’s a very good fighter but I’m coming in ready.

“I’m not coming in to fight him, I’m coming in to beat him and I’m gonna be more than ready for this fight. I know what the numbers [betting odds] are at but I’m going to change that,” he said.

There is a lot of belief around Lemiuex with regards to his new team at Golden Boy Promotions, who share the sentiment that he is the future in the middleweight division. He has evidently come on leaps and bounds since a nightmare 2011 in which he was knocked out by Marco Antonio Rubio and beaten by Joachim Alcine – and the French-Canadian is keen to pay back his backers’ faith by further tightening up some of the holes in his game that still exist, perhaps notably in the defensive department.

“I have a lot of gifts that others don’t,” he said perhaps referring to his vaunted power and brutal hooking – two of his better qualities. “I have to polish those and I’ve gotta work on a lot of different things for a guy like Golovkin, ’cause he’s very strong and a very complete fighter.

“I’m working very hard with my team right now, it’s been my best camp ever so we’re coming into this fight ready – the guns are loaded!”

Golovkin/Lemieux is on HBO PPV in the US and will be screened by Boxnation in the UK.