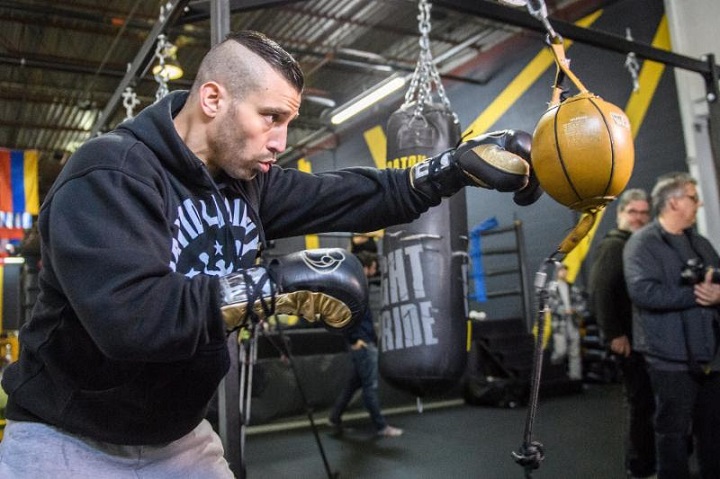 HBO BOXING AFTER DARK presents a nonstop doubleheader of hot ring action when DAVID LEMIEUX VS. CURTIS STEVENS AND YURIORKIS GAMBOA VS. RENE ALVARADO is seen SATURDAY, MARCH 11 at 11:00 p.m. (ET/PT) from the Turning Stone Resort Casino in Verona, NY. The HBO Sports team will call all the action, which will be available in HDTV, closed-captioned for the hearing-impaired and presented in Spanish on HBO Latino.

In an intriguing middleweight showdown that could help sort out the talent-rich 160-pound division, Montreal’s David Lemieux (36-3, 32 KOs) takes on Brooklynite Curtis Stevens (29-5, 21 KOs) in a scheduled 12-round contest. Both are known for power and aggression and are highly motivated to reestablish their presence in this highly competitive division. The fight marks the third HBO appearance for both men.

In the opening bout, Cuban Olympic gold medalist Yuriorkis Gamboa (25-1, 17 KOs), now fighting out of Miami, returns to the ring following a year layoff, taking on Nicaragua’s Rene Alvarado (24-7, 16 KOs) in scheduled ten-round junior lightweight contest. A highly skilled former world champion, Gamboa needs a strong showing to prove he is still a force at 130 pounds. His only pro loss came at the hands of rising superstar Terence Crawford in a 2014 slugfest.

Immediately following the doubleheader of live action is the premiere of the HBO Sports presentation: 2 Days: “Chocolatito” Gonzalez as the sport’s consensus No. 1 pound-for-pound prizefighter prepares for his March 18 bout in New York City.

“Not only did we want to bring the fans an action-packed main event likely to be a Fight of the Year candidate, we also want to give an entertaining undercard to match,” said Oscar De La Hoya, Chairman and CEO of Golden Boy Promotions. “We are certain every fighter on this card will be put to the test come fight night, and the victors will be propelled to a greater shot at a world title prize.”

Riding on a quadruple knockout streak, Temple Hills, MD’s D’Mitrius Ballard (15-0, 11 KOs) will risk his undefeated status as he faces Zoltan Sera (26-11, 17 KOs) from Budapest, Hungary for an eight round light heavyweight bout.

Participating in the swing bout of the night, Alex Rincon of Carrollton, TX will be making his professional debut as he takes on Ardmore, Okla.’s Shaun “Buddy Hollie” Lee Henson (2-3, 2 KOs) for a four round super welterweight war.

Highly touted Philly prospect Damon “No Smilin'” Allen, Jr. (10-0-1, 4 KOs) is eager to make a name for himself in the lightweight division as he puts back on the gloves to square off against Budapest, Hungary’s Adam “Bad Boy” Mate (24-10, 17 KOs) in a scheduled eight round bout.

Fighting in the first fight of the night and also representing Philadelphia, Todd “2Gunz” Unthank-May (10-0, 4 KOs) will take on southpaw fighter Quinton Rankin (12-3-1, 9 KOs) of Charlotte, NC for an eight round light heavyweight fight sure to excite fans.

Lemieux was joined his trainer Marc Ramsay at today’s media workout and spoke onsite about his matchup with Stevens and his training leading up to the mega event for the middleweight titles. Below is what Lemieux and his team had to say at today’s workout:

”The last time that my opponent spoke so much and I so disliked him, I believe it was Delray Raines. I broke three of his ribs and his nose. It didn’t end up very well for him.

”I couldn’t be more prepared for a fight. I have one objective in mind: I want to take his head off. I am so motivated to put on a great performance on Saturday night. Stevens put a lot of oil in the fire with his disrespectful comments and he will pay for it.

”I had an exceptional camp and we have prepared for this fight very seriously. We are ready for the best Stevens there is, going 12 rounds if needed. I guarantee you that it will be a rough night for him. ”

”It is important to go there and deliver a spectacular performance. This is a good challenge. In this fight, we have to execute well what we have prepared to do for the last eight weeks. ”