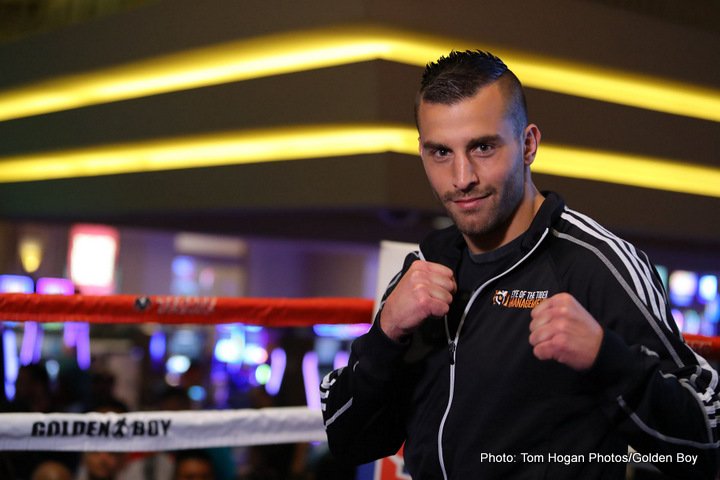 We are all waiting for talented and unbeaten WBO middleweight champ Billy Joe Saunders to get a fight where he can really, truly prove his worth. The gifted southpaw has called out Gennady Golovkin, on numerous occasions, as well as other big names of his division and elsewhere; but the massive fights have, for one reason or another, proven elusive for BJS.

All set to fight dangerous, sawn-off banger Avtandill Khurtsidze on July 8, Saunders saw that intriguing fight fall apart due to his would-be challenger’s shocking arrest for, well, all manner of seriously alleged things. So without a dance partner when he seriously needs one (Saunders has boxed just once since December of 2015) the 24-0(12) champ might just have found one in monster puncher David Lemieux.

The two have traded insults, colourful ones, on social media, and they both appear to genuinely want the fight. According to a piece on BoxNation’s website, Saunders is now looking at next fighting on September 16 in London (this of course being the night when GGG and Canelo will meet in the biggest fight of the year). And though Saunders has called out both GGG and Canelo (even turning up at Monday’s presser in London to do so, being recognised by neither!) he has not been able to secure either fight (both stars question whether he really wants/wanted to fight them) – and he now apparently wants to fight Lemieux.

“@bjsaunders_I can’t wait to make you bleed and take that belt away from u. I’m going to destroy u. Cu soon pussy,” Lemieux, 38-3(33) wrote on twitter yesterday.

“C*ck boy are you next in line so le’s go,” Saunders responded a little later yesterday.

So, will this fight – the biggest of Saunders’ career – actually happen, or is it merely more talk? Saunders NEEDS a big fight, a really testing fight (okay, he has beaten quality operators Andy Lee and Chris Eubank Jr.) and Lemieux seems to be more than willing to accommodate the British traveller.

Ideally, these two will clash, with the winner being smack, bang in line for a shot at the GGG-Canelo winner. Remember, GGG really wants to get his hands on that WBO belt; the one Saunders currently holds. Can BJS retain it against former IBF ruler Lemieux?