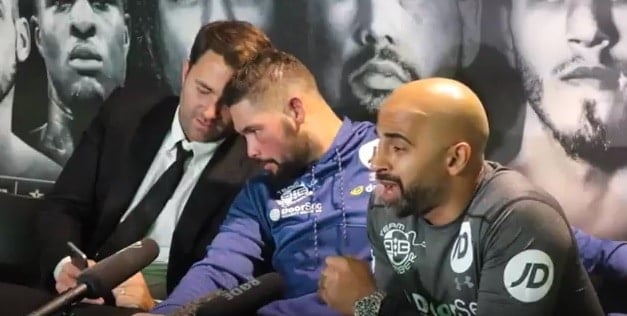 As fight fans probably know, unified light-heavyweight champ Andre Ward, for many the reigning pound-for-pound king, has expressed a serious interest in moving his considerable talents up to the cruiserweight division; maybe even the heavyweight division.

This may or may not happen, but already, since he made his possible intentions known, one big-name cruiserweight has come out and said he would be more than wiling to accommodate Ward in his 200-pound debut: Tony Bellew. Bellew, who was given the title of WBC cruiser “Emeritus champion” after his move up to heavyweight (and a win over a one-legged David Haye this March) has informed Sky Sports he would be more than willing to get it on with the unbeaten Ward.

“He’s a great guy. If he really wants to do it – I’m game, it’s as simple as that,” Bellew said when speaking about Ward and his plans to move up. “Like I say, I do respect him, he’s an amazing fighter. He’s very good at what he does. But I’m a full blown, big cruiserweight. I’m not a light-heavyweight who is struggling any more and I’ve shown the world that I can deal with one of the most powerful heavyweights in the world (Haye).

“I would have no problem dealing with Andre Ward.”

Though it would be no mega-fight, a Ward-Bellew fight (who would be the A-side!) would attract plenty of attention. Maybe some boxing historians would liken this one, if it happened, to the Thomas Hearns-Dennis Andries title fight of 1987. Here, a proven all-time great (Hearns) wanted a title at a higher weight (175) and he pounced on a reigning champ (Andries) who was generally looked at as the weakest current champ at the poundage at the time.

As it turned out, the seriously tough Andries gave Hearns a test before being stopped late on. But will Team-Ward view Bellew as a similarly beatable champion? Maybe. But if so, will “Bomber” Bellew make Ward regret his decision?

Ward would likely step into the ring as a considerable betting favourite if he fought Bellew (who sure has a ton of exciting, lucrative options right now, what with Ward, Haye II, Joseph Parker and even Deontay Wilder and Tyson Fury recently being spoken about as possible future foes for the Liverpool man) – but it could well prove to be an interesting tussle.

Let’s see if Ward shows any interest in facing Bellew.