Conor Benn and Samuel Vargas both weighed in successfully on Friday for their 10-round fight live on DAZN and Sky Sports this Saturday night at the Copper Box Arena in London, England. 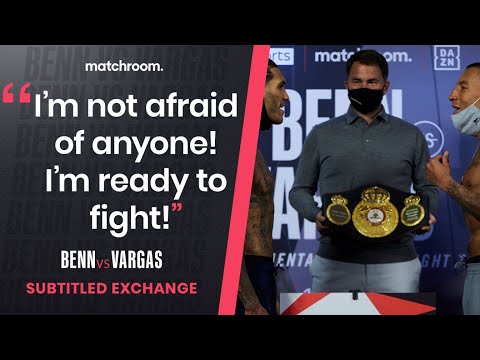 The background music during the weigh-in, while it was a nice touch, made it impossible to hear the verbal exchange between Conor and the 31-year-old Vargas (31-6-2, 14 KOs).

Benn needs a win over Vargas to get a big pay-per-view level fight against Amir Khan or Kell Brook.

The Khan fight is what Benn would like, but he needs a victory over Vargas to make the match-up a possibility. It’ll be up to Khan if he wants to take the fight with Benn, and it’s difficult to predict whether he’ll agree to it.

In the past, Khan has shied away from fighting fellow Brits, which has kept him from cashing in on his popularity the way he could have. At 34, this might be Khan’s last chance of a big payday before he retires.

“I got the biggest viewing numbers outside of the heavyweight division outside of [Dillian] Whyte.

My last fight [against Sebastian Formella], my viewing numbers were insane, and I don’t know what this one is going to be.

What do you say to that? I obviously entertain, I obviously deliver. It’s such a blessing.

“I wouldn’t be where I am without the supporters. I don’t listen to what others say,” said Benn when told that Amir Khan has had some comments about him.

“I listen to what my trainers have to say, and I focus on what I see. My trainers, my dad [Nigel Benn] and my opinion. That’s all that matters. I don’t care what Khan says. I know I can be a world champion, and I know what I have to go through,” said Benn.

Vargas will be a really tough out for Benn on Saturday, and you can’t rule out a win for the Colombian.

He punches harder than Benn, and he’s got much more experience. Indeed, Vargas is the only one with experience in this fight against world-class opposition.

The closest thing that Benn has fought resembling a world-class-level fighter is Sebastian Formella, who is a bottom fringe-level contender at best.

Calling Formella a contender is difficult when you look at his recent performances against Benn and Shawn Porter. Vargas has been in with Errol Spence Jr, Danny Garcia, Amir Khan, Luis Collazo, and Vergil Ortiz Jr.

Benn would likely be well over his head against Vergil, Spence, and Danny.

Interestingly, Conor Benn’s ratings are just below heavyweight Dillian Whyte, as he’s just starting. Benn has only been a professional for five years, and he’s never fought a top 10 welterweight before.

If Benn can beat Vargas and Khan or Brook, his popularity could go through the roof in 2021. Even if Benn never captures a world title, he can make a lot of money in the same way Whyte and Dereck Chisora have.

Neither of those two fighters has won world titles, yet they’ve made a lot of money fighting on Sky Box Office.

Benn wants Khan before he retires

“I thought it was the end of the world when I hit the deck,” said Conor Benn about his first fight with Cedrick Peynaud.

“I can’t see past Vargas because I know I got my hands full with Vargas,” said Benn when asked about his thoughts on fighting Amir Khan.

“The big domestics are what the public wants. He’s a fighter that I’ve looked up to, and I’d like to share the ring with him before he retires.

“Yeah, I think it’ll be a great fight, and I’ll learn a lot from that fight, as I will against Vargas. I mean, we’ll see where I’m at with Vargas.

“I can’t jump the gun. I can’t be thinking about anybody else because It’ll irrelevant if things don’t go right with Vargas. I’ve got to fully focus on him.

“There’s nothing else I can think of because I’ve made that same mistake before. I’m not going to be fooled twice. That first mistake was enough.

“I can’t be thinking of anyone else. Look what Vargas almost did to Khan, and Khan has achieved everything I want to achieve in the sport,” said Benn.

Getting Khan to agree to fight Benn may prove difficult for Eddie Hearn of Matchroom Boxing, as he’s clearly avoided fighting Brook all these years.

While Khan has finally decided to fight Brook, it’s safe to say that his decision was made after looking at how bad he looked in his recent fourth-round knockout loss to WBO welterweight champion Terence Crawford last November.

Khan vs. Benn would likely sell well, though, and it’ll get many fans excited about it worldwide, particularly if Conor looks good on Saturday night against Vargas.

“So if I see an opening, I’m going to take it,” Benn said about him planning to go for a knockout of Vargas.

“This is what I’ve got to worry about this Saturday against Vargas. Nothing else can cloud my vision.

“Don’t get me wrong; I’m very confident I’m going to win. The minute you start to take your eyes off the ball is the minute things start going down that slippery slope.

“ake your time in the first couple of rounds, ease into the fight, and then when you see an opening, pounce on him,” said Conor when told what his dad Nigel Benn told him what to do against Vargas.

“That’s what he said. That’s his way of navigating things,” said Benn. 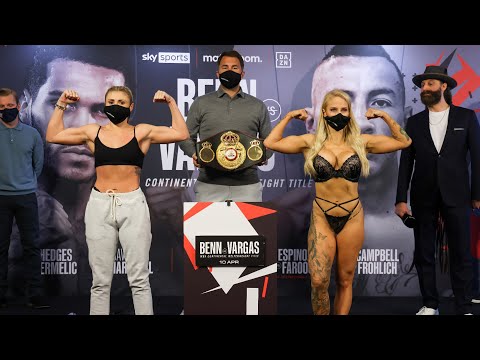