Conor Benn believes his fierce sparring sessions with Felix Cash has prepared him for what’s in store for him against Chris Eubank Jr on October 8th at the O2 Arena in London.

Benn (21-0, 14 KOs) feels that his training with the unbeaten Cash is going to have him ready for whatever Eubank Jr (32-2, 23 KOs) brings to the table on October 8th in their 157-lb catchweight fight on DAZN pay-per-view.

Eubank Jr isn’t the type of fighter that is going to stand in the pocket and slug nonstop for 12 rounds with Benn. Chris Jr is more likely to use movement and look to catch Benn with sneaky left hooks that he doesn’t see coming.

Eubank Jr’s fighting style is totally different from earlier in his career when he fought the likes of Billy Joe Saunders and George Groves. Roy Jones Jr. has changed how Eubank Jr fights, and he’s a very skilled fighter that catches his opponents with sneaky shots.

Benn has arguably been protected by his promoter Eddie Hearn and shielded from the fights against risky opponents like Jaron ‘Boots’ Ennis, Vergil Ortiz Jr, and Keith Thurman.

“110%,” said Conor Benn to iFL TV when asked if he’s going to be 100% for the Chris Eubank Jr fight. “He better work on his calculations and hope that his calculations are right because it didn’t work for Groves or Billy Joe.

“So, he best get his calculations right for this one, or he’s in for a rude awakening.

“I don’t remember that well,” said Benn when asked about his thoughts on Eubank Jr’s performance against George Groves. “I watched the DeGale one. DeGale wasn’t at his best or in his prime. In my opinion, he was past.

“You had Billy Joe, who boxed his head off, really. The first round depends on how he wants to come out,” said Benn on how the fight with Eubank Jr will play out.

“I’ll make sure I prepare like that. I train hard to know that I go into the ring with that confidence. Those spars with Felix [Cash], they were really hard. No one pushes me as Felix does.

“No one keeps me honest & switched on as Felix does. He’s a powerful, explosive fighter. He’s me but a lot bigger. I mean, that is in that he reminds me of my dad. His ferociousness and his spitefulness.

“I’ve seen him fold people in sparring. When I mean like me, he’s spiteful, aggressive, and doesn’t take a backward step. Obviously, he’s such a good fighter.

“He’s the person that I based everything on in my spars. I did 12 rounds with him yesterday, and I am sore today.

“I don’t think he could really care less,” said Benn when told that Eubank Jr said that his dad, Nigel Benn, has had sleepless nights from his two fights with Chris Eubank Sr.

“It’s silly. But maybe Eubank Sr is the one that has had sleepless nights for whatever reason. My dad is chilled, man. He’s so laid back. My dad just goes through the motions, man,” said Benn. 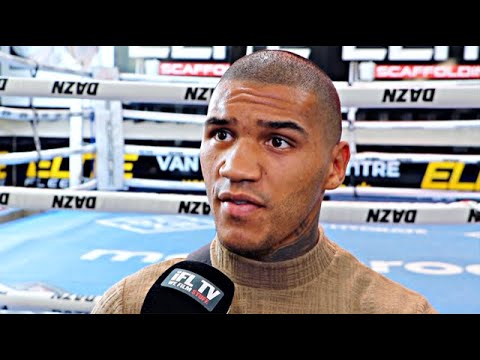