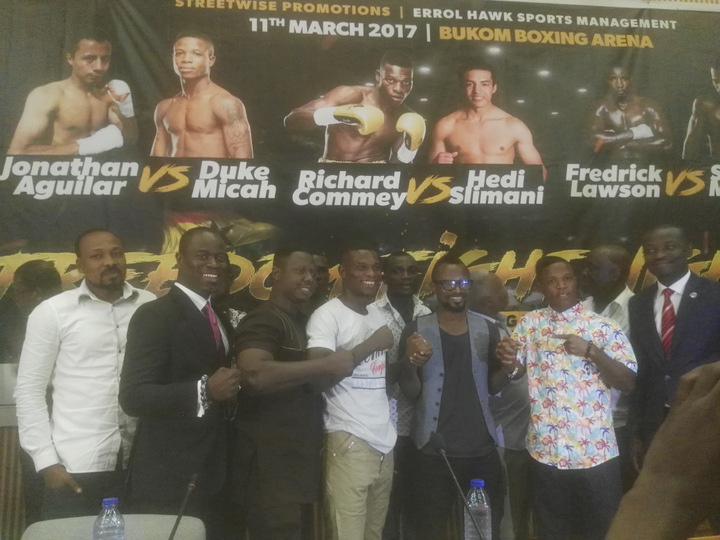 Commey hopes to relaunch his world title dreams with victory over the 29 year old Slimani in the Ghanaian capital in a show put together by Streetwise Promotions and Errol Hawk Sports Management with support of the Ghana’s 60th independence anniversary celebrations.

“I am very happy to get this chance to fight before my own people, it’s been a long time since I fought in my country and I am going to win this title and after that I am going to win and win until I bring the world title, trust me,” Commey told Thursday afternoon’s press conference in Accra to announce the bill.

“Its not easy to fight abroad and I experienced it when got the chance to fight for the world title in the US last year. It did not work out well but 2016 is gone and I’m surely going to win a world title for Ghana,” Commey said.

Also featuring on fight night for the WBC international silver welterweight title against Jamaica’s Sakima Mullings (19-2, 14 KOs) is highly rated Fredrick ‘Okunka’ Lawson (24-1, 20 KOs) who makes a first return to the ring since suffering his first career defeat in a IBF welterweight title eliminator to Canada’s Kevin Bizier in the US in November 2015.

“It surely promises to be a good night to be a Ghanaian and we appreciate the support of the new regime who have declared their commitment to promoting the sport in this country and have made this promotion an official part of Ghana’s 60th independence celebrations,” said Michael Amoo-Bediako, CEO of Streetwise Promotions.

“There is no doubt we have the talents and with support of government and corporate Ghana, we will surely produce more world champions than ever before,” he added