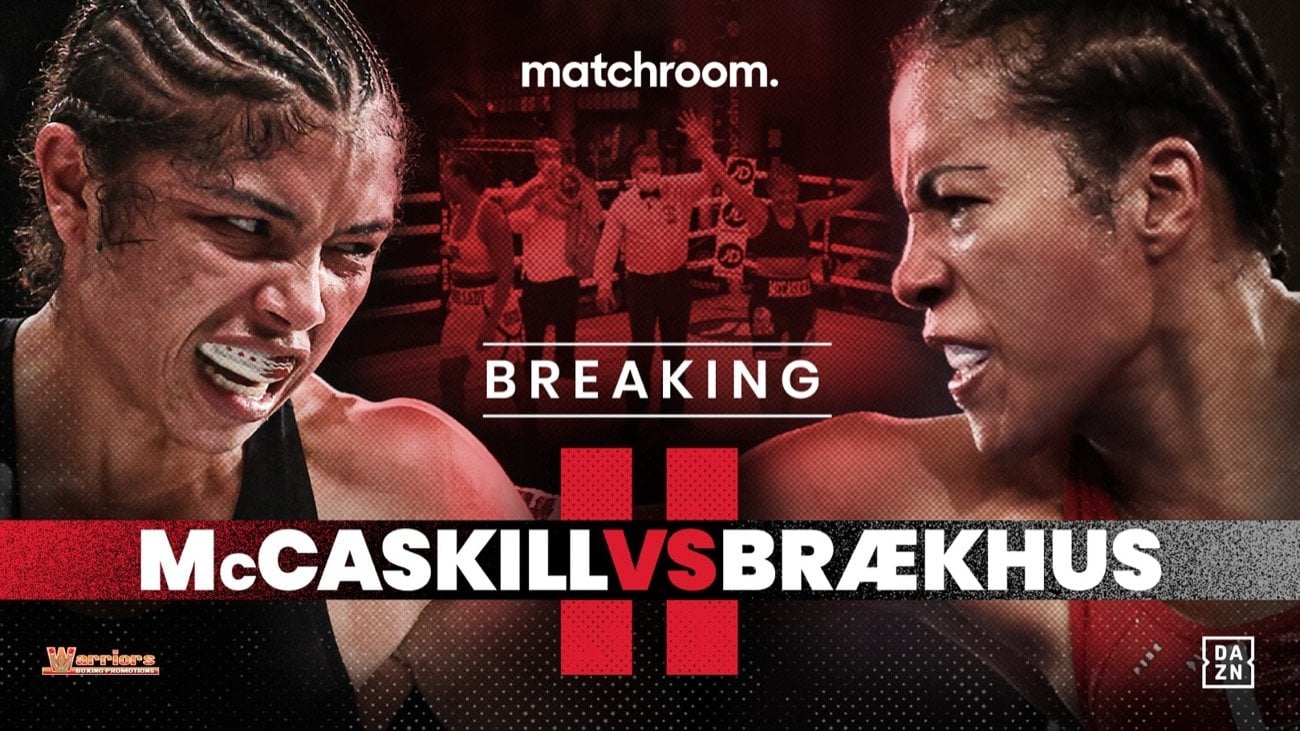 “Shame on your team for not preparing you mentally for defeat and shame on you for pretending to be the victim. You have to be the champion you say you are,” Jessica McCaskill

Jessica McCaskill and Cecilia Brækhus ramped up their rivalry in a fiery e-press conference ahead of their rematch for the undisputed World Welterweight title at the American Airlines Center in Dallas, Texas, on Saturday March 13, live worldwide on DAZN.

Hearn On Saunders And His Chances Of Beating Canelo: He Has No Fear, He's A Bit Crazy

McCaskill (9-2 3 KOs) ripped the titles from Brækhus (36-1 9 KOs) on the streets of downtown Tulsa, Oklahoma in August as Matchroom returned to action in the US, and now it’s McCaskill putting the belts on the line and Brækhus is looking to avenge her first pro defeat.

Promoter Eddie Hearn sat them down as the date ticked over to under a month to go to the rematch, and after Hearn’s initial questions to both fighters, tensions rose and the Chicagoan and Norwegian could have been back in the ring as the traded verbal blows back and forth to light the blue touch paper ahead of the return bout.

“I feel the last fight was the last one of her career,” said McCaskill. “Once someone shows that weakness, shows they are not in it and alludes to retirement, that shows that they are mentally out of the game.

“We’ve never been given a whole lot, we’ve taken really big risks and they have gotten us to those higher places, I haven’t been given anything, I don’t want to take on anyone else’s legacy, I’m building my own and making history every step of the day and that’s what I want to continue to do.

“I feel great – every time I have had to fight for a belt, it’s been from a champion, Cecilia, you have fought for vacant titles, I’ve had to take mine from everyone I fought from, I’ve never just fought for a vacant title and it’s heads or tails on who is going to win it.

“I’m not saying I don’t get the credit for my last fight, but over the time that I’ve fought and the different hurdles that I have crossed, that’s what I don’t think I get the credit for, that’s not to make excuses. Everything I say is the truth, I don’t talk trash.”

“I felt I won’t the fight, it was very close, I could have got the decision,” said Brækhus. “A lot of people thought I won and it’s not the way to lose your belts.

“I know I am a better fighter than Jessica, I had a bit of an off day, but I feel I did what I needed to do to retain my belts, but I was not at home I was on her home turf and she got the belts.

“She says that people are hating on her because of the way she got the belts, they aren’t hating but people aren’t satisfied because that’s not the way anyone should become an undisputed champion, it should be harder than that. I don’t think she has a good feeling the way she won the belts.”

McCaskill and Brækhus clash on a massive night of action in Dallas with a triple header of World title action.

Topping the bill is another mouth-watering rematch as Juan Francisco Estrada (41-3 28 KOs) and Roman ‘Chocolatito’ Gonzalez (50-2 41 KOs) finally meet for the second time eight years after their first bout, this time in a unification for the WBC, WBA and Ring Magazine World Super-Flyweight titles.

There’s a Matchroom debut on the card for Hiroto Kyoguchi (14-0 9 KOs) as he defends his WBA and Ring Magazine World Light-Flyweight titles against Axel Vega (14-3-1 8 KOs).

Jessica McCaskill will defend her undisputed World Welterweight title against Cecilia Brækhus in on March 13 after former champion Brækhus activated the rematch clause.

McCaskill ripped the titles from Brækhus in a tightly fought contest on the streets of downtown Tulsa, Oklahoma in August as Matchroom returned to action in the US, with one judge unable to split the pair but challenger McCaskill getting the nod on the other cards, 97-94 and 97-93.

The win meant that McCaskill (9-2 3 KOs) became a two-weight World champion in just her 11th pro outing, and was another chapter of a phenomenal rise for the Chicago ace, from traveling to London, England in her seventh pro fight in December 2017 and giving Lightweight champion and Irish sensation Katie Taylor a run for her money in McCaskill’s first World title fight, before picking up the WBA World Super-Lightweight title in her next fight on home turf against Erica Farias in October 2018 and then unifying the 140lbs division against Anahi Sanchez in May 2019.

Brækhus (36-1 9 KOs) suffered her first career defeat in Tulsa and that loss prevented the Norwegian from making history by breaking Joe Louis’ 72 year record of 25 consecutive World title defenses, but ‘The First Lady’ of boxing was denied by the Chicagoan – and hinted at retirement in her post-fight interview. Now both former champion and defending ruler are ready to lock horns once again, with an early 2021 date and venue to be announced later in the year.

“That’s the fastest retirement I’ve ever seen in boxing history – she’s back!” said McCaskill. “We knew she would be back and that it would only be a matter of time. Usually those types of conversations straight after a fight to direct the audience’s eyes away from the loss. In this sport, so many people have said that they are retired and then come back to have fights.

“I gave her the belts back and just wanted to be the one to do that. There’s never been any bad blood, I could have had my team send the belts back but there was no reason not to give the belts back myself so we went over to her room and she was on the phone to her family, when she got off the phone, she made comments to passing the torch and with her being beaten for the first time I think she expects someone else to carry on her legacy and I have my own legacy to fulfill and that’s where my focus is.

“Tulsa is over with and now I have to get up for the rematch which is part of being professional and part of the gameplay. The only rematch I’ve had in my pro career was with Erica Farias so it’s part of it and you cannot expect anything to motivate, you can’t expect your team to hype you up for a workout, what if they are not there that day? You can’t expect the fans to get you hyped for the fight because what if there are no fans? I am a very mentally strong person, I can control how to get from point a to point b so I will be ready for it.”

“It was the weakest performance in my whole career,” said Brækhus. “I still feel I won, or could have got a draw, and when I thought about that, I knew I could beat her in a rematch. I didn’t want to go out with a career-worst performance either, I definitely owe that to my fans. If this was a fight where I lost to a better fighter, had been in my best shape and had given it my all, then fine, I could retire, but that was not the case here.

“She gave her everything in the ring and I wanted to give her props for that, I knew what I was going through and what I was struggling with, for everyone this was just a tough time. But we need to meet again under different circumstances.

“It’s hard to explain exactly how I was in the ring that night for everyone that has watched my other fights and been following me for a while they saw that something was very wrong. So for me to come back after getting some time in Norway with my friends and family, spending time on my other projects and gaining my strength back and going back to training camp, I don’t need to do anything different to get the win.

“I learnt how good I am! I was in bad shape and I still feel like I beat a great fighter like Jessica, so my self-esteem is very high right now. A win or a draw would be OK but I also understand the emotional aspect of giving Jessica the win because she fought her heart out, if you were a judge and saw this I can understand that.

“We never underestimated Jessica at all, these are unprecedented times and there’s no blueprint here, I didn’t have anyone that I could call and ask ‘what do I do in this situation?’ This had never happened before so I just had to try my luck, there’s no-one to blame it just didn’t work out for us.

“The situation with no crowd didn’t bother me so much, it’s good in a way because it’s completely neutral! But it would be good to have fans for the rematch, it gives us more energy and a little extra, we don’t want three American judges next time that’s for sure! I think if it’s in America I will have to get the KO for sure, after meeting Jessica in the ring, I was never near getting KO’d so I’m definitely not worried about that.”