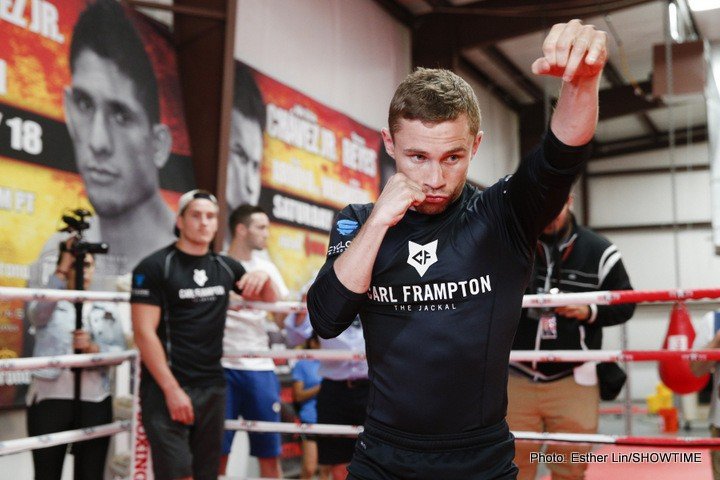 The fight represents the first step in bolstering Frampton’s international reputation, and “The Jackal” said at yesterday’s media workout that he is relishing the opportunity to showcase his skills in front of a new, larger audience.

“I’m very excited. Fighting for the first time in the United States on CBS, this is an incredible opportunity for me to get great exposure” Frampton said.

“His dad was a great champion, a great fighter. I respect both Gonzalez Jr and his father.”

Yet Frampton is certain that the watching fans will witness a gulf in class when he debuts, and the Americans will start to see what the British have been raving about for so long now.

“It’s just levels really, and I am at a better level than Alejandro Gonzalez Jr. He’s a good fighter, I’m giving him credit. He will come to fight and make it interesting but I have all the tools to beat him.”

And the Northern Irishman is confident that he and trainer Shane McGuigan – son of Barry – have developed a perfect game plan for the fight, insisting that his 70% knockout ratio is likely to factor into things in the ring;

“He will try to keep it long, most of my opponents do. (But) I can punch very hard and when I hit people they tend to go backwards.”

“From the start he will try to keep it a long fight, but it’s up to me to use tactics that will work. We have plan A and plan B, but we think plan A will work.”

For his own part, Gonzalez is aware of the fearsome reputation “The Jackal” brings into the contest, and is insistent that he won’t be overawed.

“They call Carl Frampton a superstar in the UK. He has a world championship. I’m a contender. When I become champion, I will have a following, especially when I beat Carl Frampton.”

“There are weaknesses in Carl Frampton’s game, but I can’t tell you in case he hears my plan. It’s easy to see a fighter and tell them they should have done this or that. It is different when you’re in the ring.”

READ:
The Greatest, The Most Unappreciated: The Case For Ezzard Charles

Frampton v Gonzalez Jr is on CBS in the US / ITV in the UK. The under card will be screened on ITV4 beforehand.