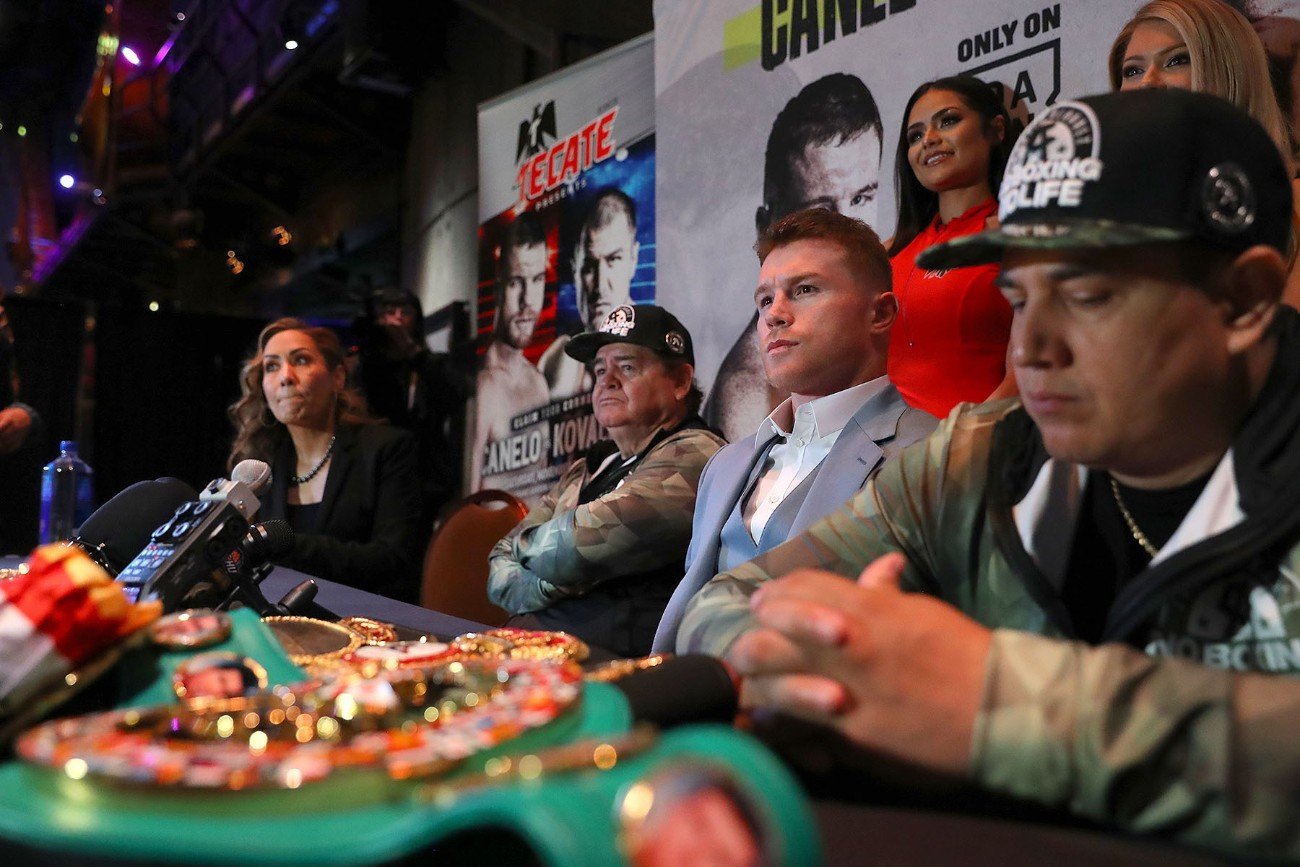 Saul Canelo Alvarez’s trainer Eddy Reynoso says they might be open to a fight against IBF/WBC light heavyweight champion Artur Beterbiev at 175 if they’re successful against WBO champion Sergey Kovalev on Saturday night. The fighter that boxing fans want to see Canelo facing at light heavyweight is Beterbiev, but it remains to be seen whether he’ll take that fight.

Canelo says he wants to see how he feels at 175 on Saturday night before he makes a decision on which direction to go in. Although Canelo has sparring light heavyweights and presumably doing well against them, it’s going to be a different ball game when he gets inside the ring with Kovalev (34-3-1, 29 KOs), and there isn’t any head gear to protect him from his heavy punches.

“We’re going to win this championship on Saturday, then we’ll maybe look for the 168 or the 160,” said Reynoso about Canelo. “If there’s another 175, we’ll win it as well. We will look for the best fights and the best opponents, who offer the best fights and continue breaking records and continue growing Saul’s professional career. Whomever, we’re ready. Kovalev is better than Beterbiev, and we’re fighting him on Saturday. So why wouldn’t we fight him?

There’s a lot of reasons why Canelo wouldn’t fight Beterbiev. The Golden Boy star holds titles at 160 and 168 that need to be defended in order to keep the straps. If Canelo is going to hold onto those belts, he’ll need to go back down in weight. That would mean that he won’t fight Beterbiev.

It’s more likely that Canelo won’t fight Beterbiev or WBA light heavyweight champion Dmitry Bivol. Those are potentially difficult fights for Canelo, because those guys are not only big, but talented as well. Kovalev is a good fighter too, but he’s 36 now, his serious stamina problems, and he doesn’t take body shots well. Andre Ward created the blueprint in how to beat Kovalev by hitting him to the body, and waiting until the second half of his fights to attack him. Kovalev’s stamina issues seem to come to light after six rounds.

Reynoso isn’t going to want to see Canelo lose to someone like Beterbiev, especially if there’s the potential of him being knocked out. Beterbiev said himself recently: “I don’t need judges.”

What Beterbiev means is that he doesn’t let judges impact his fights. Beterbiev has knocked out every opponent that he’s ever faced, and he’s an outstanding inside fighter. He punches to the body better than Canelo, and for that reason it would be a tough fight for him.

Canelo uses head movement, which is good at negating fighters that are head hunters like Gennadiy Golovkin. Beterbiev is a different story though, because he throws to the body as well. All that head movement by Canelo would be a waste of time against Beterbiev. He would ignore Canelo’s trickery and hit him to the body.