Eddie Hearn says he will speak with Canelo Alvarez and his trainer/manager Eddy Reynoso this week about a rematch with WBA light heavyweight champion Dmitry Bivol.

Ideally, Hearn would like Canelo (58-2-2, 39 KOs) to return to the 168-lb division and defend his undisputed super middleweight championship against Bivol (21-0, 11 KOs), who has already said that he’s open to moving down in weight if a fight against IBF/WBC/WBO light heavyweight champion Artur Beterbiev isn’t available.

As we learned on Tuesday, the WBC has ordered Beterbiev (18-0, 18 KOs) to defend against his IBF mandatory Callum Smith after he defends against his WBO mandatory Anthony Yarde in January.

The back-to-back mandatory defenses will occupy Beterbiev’s entire 2023 schedule, meaning the Bivol fight will need to wait until 2024.

Hearn isn’t sure what Canelo will say about the idea of defending his undisputed championship against Bivol at 168 because he thinks there’s a chance that he’ll reject that idea. After all, it will look to some boxing fans like he’s trying to gain an advantage.

If Canelo returns to 175 to challenge Bivol in a rematch, it’ll be a total mismatch like the first fight last May because Saul lacks the skills and the size to win.

The only chance Canelo has is if he can partially drain Bivol by insisting that he come down to 168, which might weaken him enough for the Mexican star to win.

If the same judges that scored the first Canelo-Bivol fight worked the rematch, Canelo would have a heck of a shot at winning.

“The conversation now arises about Dmitry Bivol going down to 168 to fight Canelo Alvarez for the undisputed super middleweight championship of the world,” said Eddie Hearn to DAZN Boxing Show.

“Vadim, his [Bivol] manager, has been telling me for many years that he can make 168. He was eating and had a big dinner on Thursday night. He had breakfast on Friday before the weigh-in.

“It’s still going to be a challenge. Then you’ve got Canelo Alvarez, who might turn around and go, ‘No, no, no. I want the same terms. I don’t want it to look like I’m changing the landscape of the fight to win.

“The answer is, I really don’t know. I’m going to catch up with Eddy Reynoso and Saul this week. I know they want to fight Dmitry Bivol. I know he wants to avenge that defeat, but ultimately, it’ll come down to the two fighters.

“There will be more money for Bivol to fight Canelo Alvarez by a long one, but at the same time, he’s a man about legacy, and if you ask him honestly, he’ll always go for the undisputed fight. That’s what he wants to achieve.

“If I’m Dmitry Bivol, I’m very confident that I beat Canelo Alvarez again at 175 based off the last performance. Now was Saul injured a little bit for that fight? Was he demotivated?

“I don’t have the answers for those questions. On paper right now, Dmitry Bivol is a big favorite to win that rematch at 175. You look at that, and you look at the risks vs. the reward. Obviously, there’s a huge amount of money as well.

“I look at the schedule of Artur Beterbiev and think I might not be able to get that until the end of the summer. So if I’m Dmitry Bivol, maybe my year looks like it’s Canelo Alvarez on Cinco de Mayo, and then Beterbiev in September for the undisputed.

“That’s the way to sort of clean up all around, really. At the same time, if I fight Beterbiev and I’m undisputed at 175, a rematch with Canelo Alvarez at 175 will give him the opportunity to be undisputed at 175 as well as 168.

“It’s pretty exciting all the way around, and I don’t think there’s a wrong answer,” said Hearn. 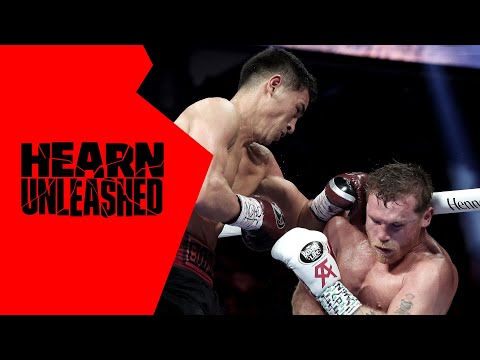