Skip to content
WhatsApp
Tweet
Share
San Antonio, TX finished its eventful boxing week on 04/20/13 Saturday night in front of nearly 40,000 fans at the Alamodome. The televised bouts of the Showtime Championship Boxing telecast included two fights that showed the reason why the fans came out to pack the venue.

The co-main event included a 1st round domination by Omar “Panterita” Figueroa, Jr. over Puerto Rican Abner Cotto. The thrilling first round included a knockdown of Abner Cotto halfway through the round. That exciting moment led to a culmination of the fight with “Panterita’s” vicious left hand body shot that sent Cotto to the ground towards the end of the round. Cotto was unable to survive the body shot as the referee completed a full ten count. This was definitely Figueroa’s coming out party as one of the rising stars in the lighter weights.

The fight that everyone came to see sealed the evening for San Antonio, TX with Saul “Canelo” Alvarez’ successful unification win over Austin “No Doubt” Trout. To some critics, the bout produced a result filled with controversy. To others, Canelo showed a glimpse of how much he has improved as a fighter at just a mere 22 years of age. As with some decisions in the sport, there will always be two sides to the story. One thing was clear after the fight ended: San Antonio, TX fans were filled with praise as their Mexican idol captured the WBA Light Middleweight title and established himself as “the man to beat” at the division.

Figueroa, Trout and Alvarez were the fighters that attended the post-fight press conference. Figueroa was extremely pleased with his performance. Trout glowed with a humble feeling of defeat while maintaining his competitive spirit; a characteristic that is rare, yet appreciated, with many fighters who experience a loss.

Alvarez credited Trout with his resilience under pressure and expressed his readiness for any assignment in the future. Here’s an exclusive look at the notable quotes, comments, visuals and reactions from the fighters, media and promoters. 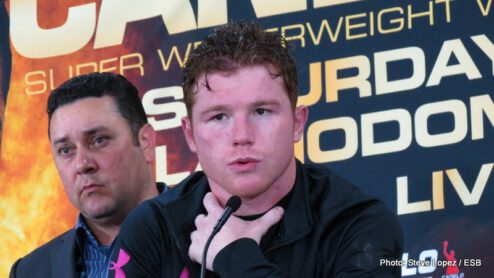 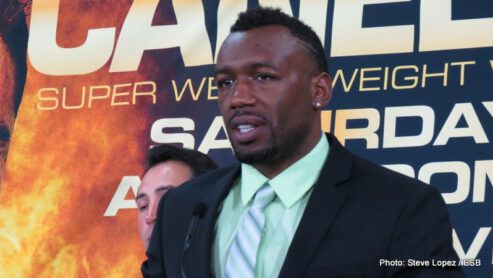 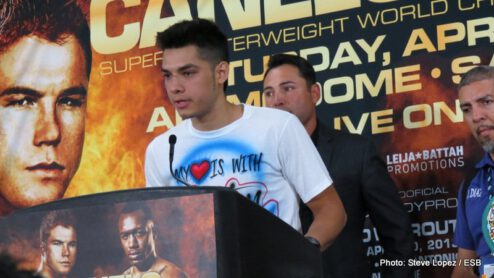 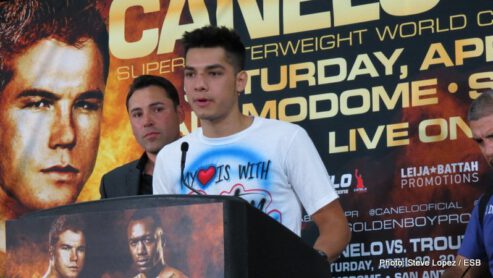 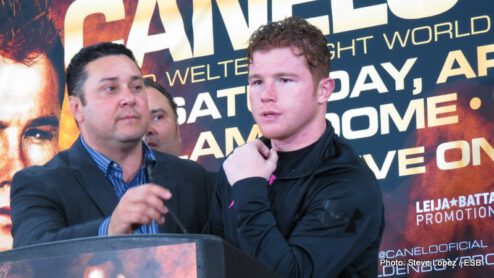 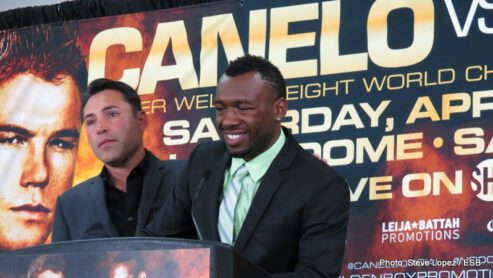 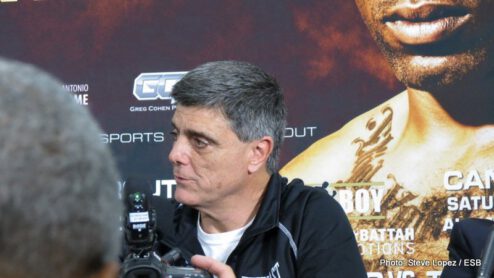 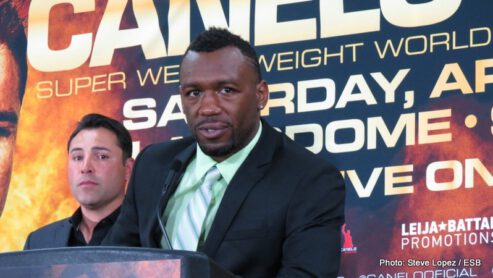 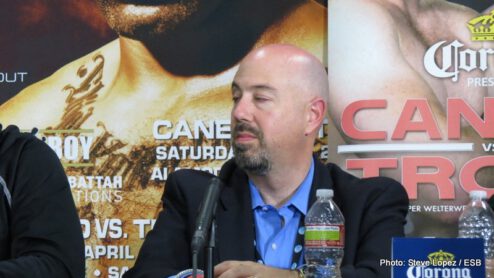 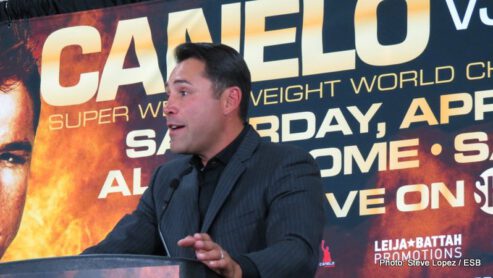 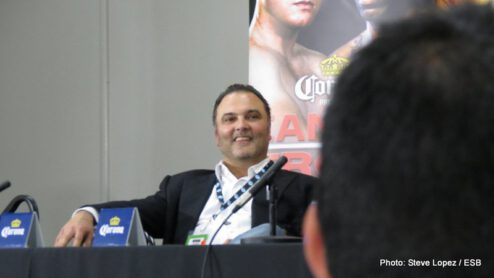 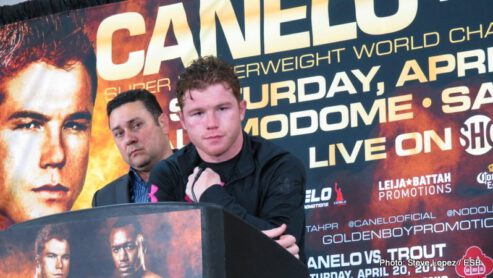 “Straight to the point, huh? Well, I don’t know what to say. We came out, we executed the way we wanted.”

“I don’t know, next? It’s whatever my team wants. I prepare myself in training camp and do my job in the ring. Let them take care of whatever job they have to do. If their job is to get me my next opponent, I’ll let them do that.”

“I used to fight at 3:00 PM in the afternoon and you looked up: the seats were empty. Tonight it was a different story. Every seat was occupied. It was electrifying. It was amazing. It was beautiful. It was a dream come true.”

Question: “From the first time you hit Cotto, did you feel you were simply too strong for him?”

Question: “Do you think maybe you’re ready for a title fight? Maybe with Richard Abril next time?”

Omar Figueroa, Jr.: “Like I said, I really don’t mind. I love fighting. I love getting hit, hitting my opponents, punishing. But, that is not my job. I don’t choose who I fight. I just prepared and get them out of the ring as soon as possible.”

Omar Figueroa, Jr.: “I don’t know…I…that’s the first time I’ve been asked that question. I think I did a good job. I executed what I wanted to do with perfection. After I hit him, I think it was with the right hand, I saw that he felt my power and he started to be more defensive. Whenever I went in, he started trying to hold me. So, I saw that opening when he would left his elbows to hold me, that’s when I went in with the looping left to the body.”

“Well, you know, everyone’s gotta lose sometime. I take my hat off humbly. It wasn’t God’s will for me to win so I have to accept that and move with the best of my abilities. I have no excuses today. I’m going to take it on the chin like a man and just come back fighting.” ***crowd cheers***
“I don’t have much to say. I’ll answer any questions you guys may have.”

Question: “The open scoring. Were you guys new to the scoring? Did you wish that wasn’t part of this fight and did it affect the gameplan of the fight adversely in any way?”

Austin Trout: “You know, I felt like we were behind. I’m a big critic of myself more than anything. So, usually, even if I was winning or if it was close, I still will think I’m losing. The crowd cheered for everything. I wanted to shut them up, so I wanted to step on the gas. I wouldn’t say I wish that didn’t happen. It happens, so it was meant to be.”

Bob Spagnola: “I really wasn’t aware of the scores because we were in the stands and not in the corner. We didn’t really have a way to stand up. We just wanted Bobby and the guys in the corner to be aware and interact with Austin. So, we really weren’t aware.

Question: “Trout, one of the full quotes we got was you said ‘Canelo came out with a different style’ that you weren’t expecting. Can you kind of elaborate on that and some of the adjustments that you made?”
Austin Trout: “He was a bit slicker than we thought. He was making me miss, moving his head better/quicker. Not that we weren’t prepared. We were fully prepared for this fight. He just came out on top.

Austin Trout: “That’s bull. But, I’m not a judge, so…I go with control that I have in the ring.”

Question: “How bad did he hurt you when he caught you with that right hand?”

Austin Trout: “It was a good shot, but I got right back up, so…I wasn’t devastated.”

Question: “Do you want an immediate rematch? If so, what would you do different?”

Austin Trout: “I would love a rematch. I would box more. I would go to the body a bit more. But, we’ll make those adjustments in the gym.”

Question: “Austin, did you have trouble making 154?”

Austin Trout: “No. I wouldn’t say I made it easy. But, I wasn’t killing myself.”

Question: “Austin, you proved yourself to be a world-class fighter. You gave him probably his toughest fight. What’s next for you?”

Austin Trout: “We’re going to go back to the drawing board. See what Al Haymon, Bog Spagnola and Greg Cohen can come up with. It’s really not up to me. Whoever they put in front of me, I’ll be ready. This isn’t the last you’ll see of me. This is just a knockdown and I always get back up.

Question: “How did it feel being in there with all the fans and..no matter he does they weren’t going to wow him?”

“Sorry for the delay, but I was having doping test done on me.”

Question: “What did you think of Austin Trout as an opponent? Better or worse than what you thought?”

Saul Alvarez: “It’s what we already knew. A difficult southpaw. I wanted to land multiple shots, but I couldn’t land combinations because of his difficulty. But, just like we visualized, a difficult opponent.”

Question: “You had three opportunities to knock Austin Trout out. What kept you from doing it?’

Saul Alvarez: “He became more difficult. More difficult even after I hurt him. Tucked his head in a little more. Bigger risk of a headbutt was there. He threw punches when he was hurt. He could’ve landed a punch, so I had to calm down.”

Question: “How do you leave physically from this fight? Did you feel fatigue could become an issue for you? Who would you like for your next professional assignment?”

Saul Alvarez: “I left normally. The normal fatigue that one has after a fight. I felt very well. Let’s sit down to see what’s coming. I’m ready for anything.”

“We will be back in Texas.”

On the thought of matching up Alvarez and Mayweather: “Let’s wait and see what happens May 4th. There is not guarantee. Guerrero is going to come out strong.”

“Texas Showndown. A Texas Shootout. That would be a big fight. It’s something we’ll explore.”