Matchroom Boxing promoter Eddie Hearn says he’s going to be sitting down with Canelo Alvarez and his trainer/manager Eddy Reynoso to discuss whether they want to take the rematch with Dmitry Bivol or go in another direction for his next fight.

Canelo lost to WBA light heavyweight champion Bivol (20-0, 11 KOs) in such a manner last Saturday night that it suggests that it’s not likely the outcome will be different in a rematch in September.

Bivol was too big, skilled, and better conditioned than Canelo (57-2-2, 39 KOs) from the opening bell last Saturday night, and he basically cruised to a one-sided 12-round unanimous decision without ever getting out of first gear at the T-Mobile Arena in Las Vegas.

While Canelo did tell the media initially at the post-fight press conference that he wanted the rematch with Bivol, towards the end, he appeared to have second thoughts.

If Canelo chooses not to exercise the rematch clause, he can return to the 168-lb division and face Gennadiy Golovkin in a lucrative trilogy match on September 17th on DAZN PPV.

To be sure, it wouldn’t be ideal for Canelo to come into the third fight with Golovkin in September off the back of a one-sided 12-round decision loss to Bivol, but the fans would still be eager to see him and GGG mix it up for the third time.

No one would hold it against Canelo if he chooses not to take a rematch with the much larger Bivol because he’s too small to compete with him.

“I just can’t see him not wanting to avenge that defeat. I would say 180 for Saul and Dmitry 185, 190,” said Eddie Hearn to Fight Hub TV when asked what the rehydrated weight was for Canelo and Bivol.

“Of course, I knew how good Dmitry Bivol was, but everybody expected Saul to win,” said Hearn when asked if he was surprised by Bivol’s win over Canelo.

“So a bridge too far? I said yesterday; it’s like Saul wants to handicap himself to have the toughest challenges, and that can sometimes backfire. So now he’ll have to sit down with Eddy [Reynoso] and say, ‘Do we want to activate the rematch, or do we move to 168?'” said Hearn.

“It was an unbelievable performance from Dmitry Bivol. I think we knew what he could bring and what he could do,” said Frank Smith of Matchroom Boxing to Fight Hub TV.

“Bivol may not have proved how good he was in his last few fights, but he showed how good he is tonight, and what a win. Canelo stepped up to 175 pounds again.

“So both guys deserve a huge amount of respect,” said Smith about Canelo and Bivol. 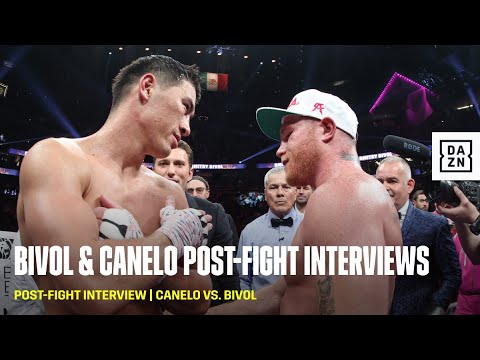