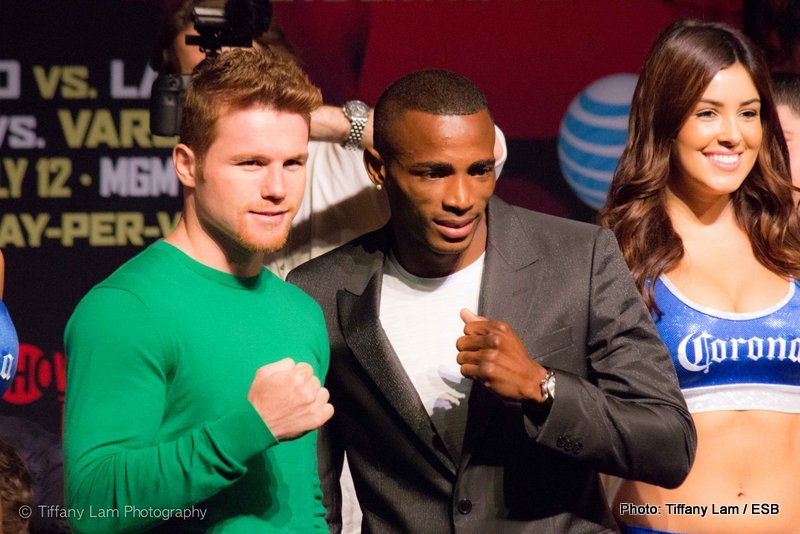 To the victor goes the spoils’ which includes an upgrade to elite status for winner of Showtime’s PPV main event this Saturday night, at the MGM Grand Garden Arena in Las Vegas, Nevada. There are many questions that remain just days before these men battle for Pride and Glory.

Can Canelo Alvarez make his star shine even brighter in this career defining moment? Will Erislandy Lara be the thorn in Canelo’s side with his counter punching slick-style? And of course with a cash cow headlining the event, it must be asked if there will be a controversial ending to add yet another black eye to an already beat up sport?

To box, or not to box, that is the question that only Canelo and his team have the answer to. Most pundits and fans alike feel Canelo will have to be more aggressive in his fight with Lara, instead of trying to out-think him in the middle of the ring.

So much is a stake for each fighter, but Canelo being the slight favorite and uber popular, has way more pressure on him heading in this matchup. Canelo Mania would take a major hit, and all the talk about being overhyped would ring true if he were to lose the last 2 out of 3 fights.

The Mayweather fight was a major success on PPV. Canelo’s performance left something to be desired. Another loss to a counter puncher would lead to Canelo being labeled as a one-dimensional boxer who is more hype than substance.

If Lara comes out victorious his stock would soar high enough to become a household name to the boxing public. Just how big Lara could get with a win depends on how the fight plays out. He could be one of those fighters we see a lot of these days, a ton of skill but no fan base, creating a stigma of high risk low reward.

For all the negativity amongst hardcore fans when it comes to Canelo, he has shown a fair amount of improvements in the last year or so. Some of those same skills that were on display versus Austin Trout will be important come fight night. The most obvious question that comes to mind for Canelo is the game plan. More specifically can Canelo apply enough pressure to make Lara shell up? Or will he make the same mistake he made against Mayweather by trying to match wits with Erislandy Lara?

Canelo doesn’t have to “run red lights”, to quote Doug Fisher from a video interview on Elie Seckcach’s YouTube Channel, about the Canelo/Lara PPV. Efficient aggression behind his jab and body work will go a long way in stunting the Cubans offense and rhythm.

Can Canelo change gears against Lara the way he did in March when he jumped on Angulo early? A pace somewhere between Austin Trout and Alfredo Angulo fights, would be keep the pressure on Lara without being too careless.

Conditioning will be huge for Canelo, who looked gassed at times in a close victory over Austin Trout. There are some rumors floating around about a weight issues and work ethic in this training camp for Canelo. He was very active in March punch-rate wise. One would assume that Alvarez wouldn’t have time to get that far out of shape with such a quick turnaround.

If Alvarez is unable to throw as many punches as it will take to win, he will have to save himself by taking breaks. A flat footed Canelo in the middle of the ring spells a second lose, and possibly a one-sided schooling similar to the lesson Mayweather inflicted on the young Mexican heartthrob.

Erislandy Lara is at his best at war, or rather under attack by the likes of Paul Williams and Alferdo Angulo. The Cuban can deflected incoming shots and also counter with sniper like accuracy and speed.
For all the positive attributes that can be heaped on Erislandy form a skills perspective, he has be very inconsistent less far in his big fights.
The triangle theory is fresh in the minds of all boxing fans whether they subscribe to the fighter A beat fighter B, so…. well you know the rest. The theory is a hot topic when it comes to breaking down who will win this fight.

Alfredo Angulo and Austin Trout are on opposite sides of the styles spectrum. That hasn’t stopped the media and fight fans from using those fights as evidence for his or hers pick.

There are a few observations that can be put in to the end equation for how well Canelo did versus Angulo, and how poorly he did against Trout. Vice a versa when it pertains to Lara when he faced the same two fighters.

Maybe Canelo can get away with a lower work rate because Lara is not a pressure fighter and either was Trout. Most think Saul needs to throw more punches but how far is Canelo willing to venture away from his comfort level?

The Trout vs. Lara fight style could turn out to be very similar to the fight Saturday night. Looking at the tape of Canelo vs. Trout, Lara is no doubt confident he could thrive and improve on Trout’s performance if the action is fought in the middle of the ring.

For my money the Erislandy Lara vs. Carlos Molina fight that ended in a draw, is the best blueprint to beat Lara for Canelo Alavarez. Molina didn’t apply that much pressure instead he was busy moving around, away from, and out of striking range after punching to the body before attacking the head. That said Carlos Molina may be a craftier fighter than Canelo, so it may tough to emulate.

If Canelo fights smart with an active with a jab at first, turning that jab into a left hook to head and body, which will help set the tone, control pace, and create proper distance the way Carlos Molina did. Lara has to be relatively busy with a jab instead of head hunting like he did Molina and at times in other fights.
Another fight Lara could steal from is Canelo vs. Mayweather. Mayweather mixed a variety of offense early on and never let Canelo get comfortable.

Perhaps the biggest key for both combatants will be who is “first” in this fight. If Canelo does turn up the heat early on, Lara will have to be first in order to slow down the incoming attack and to set up his left hand.

When this fight was first announced I leaned towards Lara because of his hand speed, accuracy, and defensive prowess. If Canelo is hesitant at all you can be sure that Lara will dominate the action. Some in the boxing world look at what Mayweather did to Canelo and assume Lara will do same.

The question I ask is who can emulate the styles of Carlos Molina for Canelo, and Floyd Mayweather for Lara, the closest?

Lara is a highly skilled fighter but he has struggled on more than one occasion in his career. He doesn’t have the grace and defensive wizardry of a Floyd Mayweather. Can u see Floyd struggling with the likes of Carlos Molina and Vanes Martirosyan? For all the success he had with “El Perro”, Lara looked like he was slowing down and had been dropped twice by hard left hands.

Had the Mayweather/Canelo fight been more competitive I doubt we would see a different Canelo. Of course we probably wouldn’t be getting this fight either because there would have been a rematch this last May.

Look for this fight to start slow as most top level match ups begin, with Lara jumping out to an early lead. It will take at least a few rounds for Canelo to adjust to Erislandy’s jab, lead left, and his overall hand/foot speed.

Canelo must set the tone with some pressure behind his stiff jab. All that head and upper body movement that Saul showed with Trout will have to be mixed with aggression.

Canelo must launch an all-out body attack to slow Lara down. However it can’t just be nonstop offense because that’s not who he is, and the counter punching of Lara will take its toll and put rounds in the bank. He must circle and pivot, using angles by stepping aside or back, to keep Lara thinking the way Molina did.

If he uses parts of Molina’s game plan with a little more pressure, I think he will do enough to get the “W” on the judge’s scorecard. To all my fellow degenerates who bet on boxing and plan on putting money on the underdog Erislandy Lara, I would wait until late Friday or early Saturday to let the Mexicans fan base place their bets on Canelo. That way you have a better chance of the line moving up to +175 or all the way up to 2-1.

I do think that Erislandy Lara has a great chance to win this fight. However, even if your scorecard reads 8 to 4 in favor of Lara that could be enough to make the outcome a draw, if Canelo had enough flurries in the rounds he won or was competitive throughout.

My official prediction is Canelo Alvarez by Split or Majority Decision.
The undercard does not feature a marquee matchup. Fight fans that plan on purchasing this card with their hard earned duckets should get a nice bang for their buck from the entertaining matchmaking and number of fights (5) if you include the Showtime fight before the PPV broadcast.