An annoyed-looking Canelo Alvarez mocked Gennadiy Golovkin when told about something that he’d said about him behind his back during the build-up to their September 17th fight in Las Vegas.

Going into this fight, Canelo seems irritated about his recent loss to Dmitry Bivol, and taking a fight against the 40-year-old Golovkin that he’s not really motivated for at this stage of his career.

Golovkin has done nothing during the last four years, taking easy tune-ups while waiting for the third fight with Canelo.

The Mexican star would rather face bigger challenges against Bivol and other top fighters rather than turn back to Golovkin to help him get his final big payday.

“I don’t care,” said Canelo Alvarez to Fight Hub TV when told that Gennadiy Golovkin said he has a lot of Mexican fans and he doesn’t have any.

“I’m focused on what I have. I don’t need anything more if I have it, okay? If I don’t have it, okay. I’m good. He always puts on an act in front of the cameras that he’s a nice person, but he’s not,” Canelo said about Golovkin being a two-faced person.

“That’s why I tell him, ‘Tell me now. You tell in other places but not now.’ I always take my preparation and training camp very seriously,” said Canelo when told that Golovkin said that he’s going to be taking the fight with him very seriously because of what happened in his loss to Dmitry Bivol.

“Sometimes your body don’t respond. That’s the difference,” Canelo said, alluding to his flat performance against Bivol last May.

“He looked good, but Usyk is a great fighter, and that’s the difference,” said Canelo about his thoughts on Anthony Joshua’s loss to Oleksandr Usyk.

“I don’t think so,” Canelo said when asked if Usyk could replicate that success with Tyson Fury. “I think Fury is going to win because he has everything. He has the boxing skills and the weight, so it’s going to be different.

“I’m very proud to be here because I come from nothing to being here,” said Canelo. 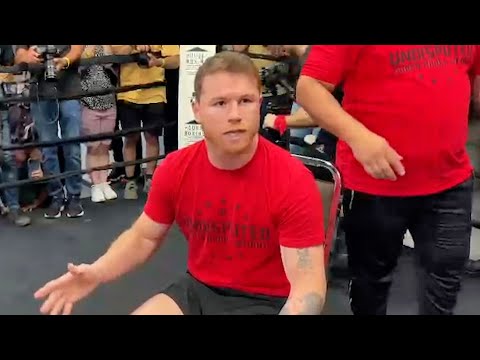