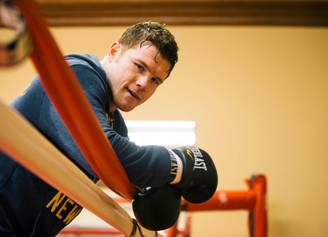 (Canelo Photo Credit: Esther Lin/SHOWTIME) San Diego (Feb. 11, 2014) – Mexican boxing superstar Canelo Alvarez and his vicious, hard-hitting foe, Alfredo “El Perro” Angulo have been busy at their training camps in San Diego and Oakland, Calif., respectively as they ready themselves for their upcoming showdown on Saturday, March 8 live on SHOWTIME PPV® from the MGM Grand Garden Arena in Las Vegas.

“Angulo is a strong fighter. He is a fighter who hits hard and can last a long time in the ring. He is a fighter that always makes his fights tough and you have to work hard to beat him. That’s what will happen on March 8 and that’s what we’ll hope to see.

“We decided to train in San Diego because it is a beautiful city with great climate all year round. The weather was a deciding factor.

[On coming off of a loss against Floyd Mayweather] “I consider myself a person with a strong mindset and that’s how I moved on from the loss against Mayweather. I always train to win, like everybody else and unfortunately last September was not the case.

“I’m training to make history and to be one of the best in boxing history. One defeat is not everything. The biggest boxers in history have been defeated. For instance, Muhammad Ali was defeated and he came back and made history. So, here I am, making history, moving forward. I fight to make boxing history. That is why I fight.”

“Camp is going great. I have never felt better in the gym.

“My hands have definitely been doing the talking. My sparring partners will tell you that.

“My team is working so hard as we do every camp.

“If [my trainer] Virgil [Hunter] is happy, then I am happy because I know that I am physically on point.

“My advice to all kids when they talk to me about boxing is that school comes first since it will help you all your life. Boxing is a short career and you have to make the most of it while you can.”