Plant gave it his best shot, but his lack of pop in his punches and his poor stamina ultimately was his undoing. Canelo, 31, took over the fight after the fourth and never looked back.

It looked to some that Plant was just trying to survive to see the final bell from the fifth round, and wasn’t putting much effort into his offense to give himself a chance of beating Alvarez.

Wade states that former IBF super middleweight champion Plant (21-1, 12 KOs) was fine after being knocked out by Canelo, and passed all the tests when was examined afterward at a nearby hospital.

Wade feels that the fight will only make Plant better because he’ll learn from having shared the ring with the superstar Canelo (57-1-2, 39 KOs).

We’ll see about that. Plant got a career-high payday of $10 million for the fight, and it could be potentially difficult for him to live the life of a boxer after getting that kind of dough.

Wade didn’t mention who Plant will need to face for him to rebuild after this loss, but he did say that Jermall Charlo is interested in facing him. That would be a difficult fight for Plan after a loss to Canelo, and he might not be ready to take on a guy with the kind of power that Charlo possesses.

“Even Canelo said, Caleb is a really good fighter. This is only going to make Caleb better, and I’m proud of the man. He gets nothing but praise from me to go and fight a champion like Canelo the way he did.

“It’s only going to make him better,” Wade said of Plant. “He’s 100% healthy, he had no issues after the fight. I actually talked to him the very next day, and he was functioning well. He had nothing lagging from the night before,” said Wade.

If Plant turns around and defeats David Benavidez after this, you can say his fight with Canelo improved him. Realistically, Plant’s chances of beating a killer like Benavidez (24-0, 21 KOs) are slim. More importantly, Plant would probably never willingly agree to fight Benavidez, as he’s never shown interest in fighting him before.

“He [Plant] went to the hospital just to get some tests to make sure everything was okay,” said Wade. “I waited and so did the whole team, and he came out with no problems. He walked out as well with no issues. He passed all the tests.

“What we did was some precautionary things. I think the body is going to recover a lot faster than the emotional. You’ve got to take a month and a half away from it and enjoy life. I promise you, he’ll be better than before.

Will Plant face Charlo in the future?

“Caleb said, ‘I got to handle this business, but you can get that,'” said Wade about Plant’s discussion with Jermall Charlo after the fight. “That means, he didn’t care. Caleb’s not the type of guy that’s going to run away from a fight.

“I can tell you as a man, he wasn’t worried about the fight [with Jermall] in the sense that he was willing to do it. We got to make the fight.

“At the moment it wasn’t the time to address it, especially coming off a weigh-in. It’s about getting rehydration and getting the nutrition back inside him at that point.

“In Charlo’s defense, he definitely understood that and he was like, ‘Yeah, I’m just letting you know, I want that fight.’ He wasn’t rude or disrespectful about it in any way. He just said, ‘I want that fight,’ and he let it go,” said Wade of Charlo being interested in facing Plant.

Without power and stamina, Plant would be just as overmatched against Jermall Charlo as he was against Canelo, and maybe even worse. 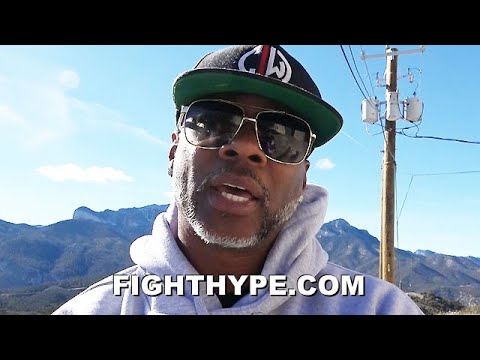