Shawn Porter is finishing up the last part of his training for his fight with Terence Crawford by sparring with Gervonta ‘Tank’ Davis this week to get ready for his November 20th match on ESPN+ PPV at the Mandalay Bay Resort & Casino in Las Vegas.

Coach Kenny Porter says there’s not much difference between the weight of Gervonta, who campaigns at lightweight, and Shawn (31-3-1, 17 KOs) right now.

The former IBF/WBC welterweight champion Porter has reduced his weight as he nears his November 20th title clash with unbeaten Crawford (37-0, 28 KOs).

Kenny Porter revealed that Shawn has already sparred with the much bigger Caleb Plant, Andre Dirrell, and Denis Douglin during this training camp. Those guys are a lot bigger than Crawford, but they have the type of skills that Porter needs to deal with him.

“Sparring this week, big week sparring,” said trainer Kenny Porter to Fighthype on what Shawn is doing in the gym as he prepares for his November 20th fight against Crawford.

“Yeah,” said Kenny when asked if this is the first time that Porter has sparring Gervonta Davis. “For those out there who think there’s a big weight class difference or whatever, we’re low in weight, he’s high in weight.

It’s not like Shawn is going to be so much bigger [than Tank Davis] when Shawn is low in weight. He’s close to his fight weight. But sparring [Andre] Dirrell, he was 200 pounds.

“When sparring with [Denis] Douglin, he was 180+ pounds. Caleb [Plant], we sparred him, and he was 190 lbs. I will say that too. He’s cracking,” said Kenny when told that Tank Davis punches like a welterweight.

“This is a great spot to be focused because you have no choice but to be focused when you can’t breathe your normal rate of breathing and your heart rate and things like that,” said Kenny about Porter training in the mounts for Crawford.

“There’s Tank Davis,” said Kenny when revealing one of a handful of fighters Porter sparred on Wednesday. “It’s just like any other sparring session. It’s a high-level sparring session for us, but we have to make sure everybody is safe.

“It’s southpaw, you need speed and power and all that. Just like we can’t fight a Terence Crawford and he can’t find a Shawn Porter to spar with.

“He’s definitely going to be fighting a smaller height guy and a strong guy, so he’ll get that from Shawn,” said Kenny about Tank Davis getting good preparation by sparring with Porter to get him ready for his December 5th fight against the 5’4″ Isaac ‘Pitbull’ Cruz for their match on SHOWTIME PPV at the Staples Center in Los Angeles. 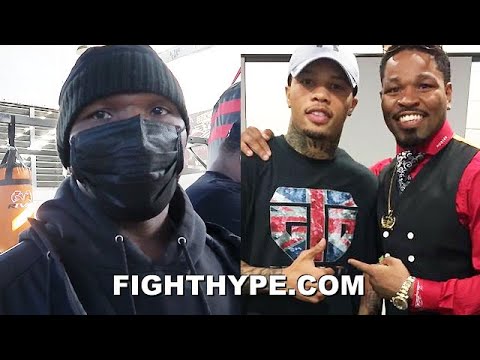 “We’ve found some really high caliber sparring, but we haven’t had sparring with those certain high-level guys for the whole entire week for two weeks. So, yeah, we got two or three sparring sessions in with Caleb Plant, and we got a sparring session in with Denis Douglin.

“We got a great sparring session in last week with Andre Dirrell when his brother [Anthony] was in town fighting. We got a great session with him. Douglin and Dirrell are both in the weight classes that we’re used to dealing with. It was great work for us.

“Other than that, our conditioning level that we’ve had has been good, it’s been great, but we came up here to raise it to another level,” said Kenny about bringing Porter to the mountains at high altitude to train. “Nine thousand five hundred feet takes you to that level,” said Kenny Porter.