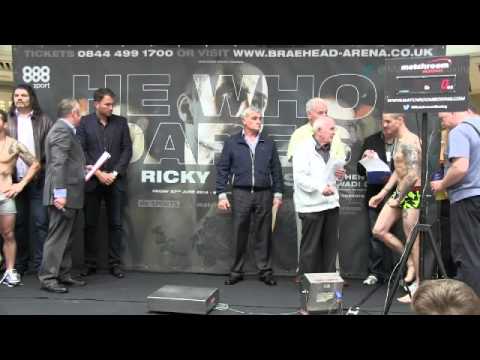 Former two weight world champ Ricky Burns (36-3-1, 11 KO’s) will be looking to convince his many doubters that he’s not an over-the-hill fighter when he faces the much smaller 5’6” Dejan Zlaticanin (18-0, 13 KO’s) tonight in a fight for the vacant WBC International lightweight title at the Braehead Arena, in Glasgow, Scotland.

At best, Burns could get a title shot against WBC lightweight champion Omar Figueroa if he wins tonight. At worse, Burns could face someone like #2 WBC Jorge Linares in a WBC eliminator with a win over Zlaticanin.

Burns’ promoter Eddie Hearn had done him a good favor in picking #13 WBC Zlaticanin for him to fight, because right now Burns needs an easy mark for him to get a sure thing win after struggling in his last three fights against Terence Crawford, Raymundo Beltran and Jose Gonzales.

Burns went 1-1-1 in those three fights, but really he should have a record of 1-2, because he was definitely beaten by Beltran and quite badly last year in September. That was the fight in which Burns suffered a broken jaw in the 2nd round, and spent the rest of the fight holding and moving instead of actually fighting.

To his credit, Burns wanted to fight Beltran in a rematch, but the World Boxing Organization got in the way of his plans by ordering him to defend his WBO lightweight title against Terence Crawford. Burns did so and ended up losing a 12 round decision to the American last March in Glasgow.

Burns gave Crawford too much respect in the first 8 rounds of the fight by not going after him and making it messy. When Burns finally did start slugging with Crawford in the last four rounds, he had a lot of success. Burns showed in those last four rounds that Crawford isn’t the same fighter when you throw combinations and stay on top of him.

Burns will need to fight hard tonight against Zlaticanin because he’s a pressure fighter that will be coming at him to try and work him over on the inside with hard body shots. Zlaticanin has good power and decent skills. His one problem is his lack of size. He’ll be giving up 4 inches in height to Burns, and that’s going to make it hard for him to compete.

Hearn has obviously picked a guy that he feels that Burns will beat with ease. The problem is if Burns can’t beat a guy like Zlaticanin easily then it’s going to put him in a position where he’s going to need to make a decision whether he’s okay with being just a contender.