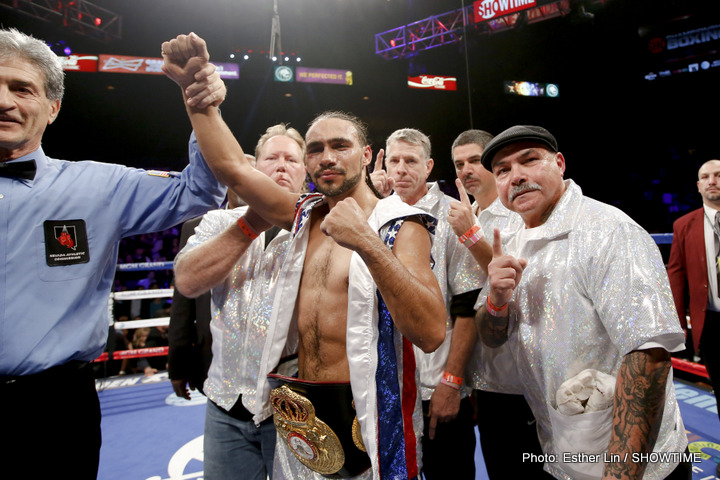 Let’s begin with the co-feature pitting talented loudmouthed Adrien Broner against face-first vet John Molina. From a style aspect this fight should produce must-see television even though most experts see Broner being a major problem for Molina. Some fans see it as a complete mismatch and claim it’s yet another Al Haymon fighter in a lackluster matchup.

Many boxing fans want to see him in the ring with a killer like Lucas Matthysse or a rematch with Marcos Maidana. In that same breath, hardcore’s don’t think of Broner as being an “A” fighter but will only be happy if he fights top level or “A” guys. Don’t get me wrong Broner deserves most of the flack he gets from his out of the ring behavior up until this point. The rest of the hate for this fight comes from his ties with Al Haymon.

No matter how Haymon’s guys are matched from here on out we know there will be a large percentage of fans and even some media members that will knit-pick their opponents while letting other promoters/fighters slide. It will be interesting to see how long this trend will continue if the current quality of fights remains consistent. My overall point is not to take up from Broner or Haymon. The bottom line is the majority of fights made in boxing have a favorite (if not a clear favorite) it’s just a matter of seeing how the fight plays out. I would never call this a crappy fight.

John Molina is a sizable underdog sitting around +550 but make no mistake about it, this is a legit opponent for Adrien Broner. It’s not as if Broner has a bunch of names he’s beaten at 140 or 147 for that matter. In his last fight, Emanuel Taylor pushed Broner throughout and came out like gangbusters from the jump. It took Broner until the 4th and 5th rounds to find his range after Taylor’s pressure had him trapped on the ropes. Ultimately, Broner was able to stand his ground and use subtle movement which turned out to be the difference.

Emanuel Taylor and John Molina apply similar offensive strategies and both like to use their hooks to the body and head. Molina will carry a much heavier stick entering the ring and that combined with aggressiveness will make this a two-way fight. Molina has proven to stay focused even when down on the scorecards like he was in his fights with Hank Lundy and Mickey Bey. He was down but not all the way out and still managed to stop both men late. The case could be made the Lundy is better from range that Broner.

Broner has the speed and skills to fight a different style rather than the walk-his-man-down approach. The jury is still out on just how good of a boxer Broner can be. That’s not to say he isn’t capable of out boxing Molina. The truth is we haven’t seen Broner on his bike for a full fight. He seems content to rely on his shell/shoulder guard to inch closer to his opponents while setting up shop in striking range.

Will we see more movement like his camp has hinted in the lead-up to this event? I could see a tad bit of movement in the form of circling and moving laterally after a combination has landed. My guess is once the bell rings Broner will look to make a statement on this new larger platform. Besides some minor footwork it will be the same old Broner.

It’s no secret that Molina has to get inside and smother Broner’s speed and combination punching. Making it a rough and tumble fight will be his main objective. The more he works the body with activity the head will eventually open up. Overhand rights and left hooks will be key punches for John Molina similar weapons that Marcos Maidana used against Broner.

When push comes to shove I see Molina pushing Broner to the limit. The biggest problem will be keeping his punches straight rather than getting too wide or lunging to punch. This fight will be compelling and stylistically very entertaining giving the fans what they want come fight night. Clean punching in combination will rule the day and give Broner the nod on the scorecards.

The main event on the inaugural PBC on NBC will match the unbeaten Keith Thurman versus former 3-time division champion Robert Guerrero. When this fight was rumored last year it was seen as a perfect testing ground to find out if Thurman is all hype or in fact is the a real deal. From the time this deal was made and the fight was announced the boxing public has since downgraded Robert Guerrero.

What was much closer to a pick’em type fight or at least 60-40 is now damn near a walk in the park at the sportsbook for Thurman. A quick search online has Robert Guerrero hovering around +450 which equates to a large underdog. What gives you say? It seems as though “The Ghost’s” come forward mauling style that he adapted since reaching the welterweight division has skewed their overall thought process when breaking down this fight or judging Guerrero’s worth.

Ringtv.com recently published their customary predictions article which includes trainers, scribes, and fighters. Out of 17 predictions not one of them picked Guerrero, a bit surprising considering the wealth of experience and skill he will bring with him into the ring.

Clearly Thurman has more speed, power, and better footwork than Guerrero. Let us not forget that Guerrero was not considered a brawler before he entered the 147 pound division. From featherweight all the way up to Lightweight, Robert earned a reputation of being a skilled guy with a solid jab and combination punching from the outside. It’s not like he forgot how to fight that way and a blend of both styles will be his best bet to secure the win.

The only thing standing in the way of Keith Thurman becoming the next big thing is a signature fight against a credible opponent. In 2014, he took a step back only fighting twice and receiving harsh criticism for his lackluster performance in his last outing against unbeaten but largely unheard of Leonard Bundu.

It’s true, 2014 was at best a stuck-in-neutral year for Thurman but all will be forgotten if he is able to do get the job done on Saturday. I for one feel that his fights with Jesus Soto Karass and Diego Chaves should be seen as real opponents or tests. He took a big punch early by Jesus Soto Karass, not only did he pass the chin and recovery test he went on to score a highlight reel knockout.

It took Thurman a while to fully figure out the awkward style of Diego Chaves but he still finished the show with a body shot. Chaves has since gone on to prove his durability and skill against Timothy Bradley and Brandon Rios. In both of those fights Keith faced early adversity and proved that he could make the necessary adjustments that a top level fighter must be able to do.

Guerrero has shown lots of defensive liabilities that the counterpunching Thurman will exploit. Let us not forget that “One time” has been hit early in fights on several occasions. Which brings us to the X’s and O’s of this, in my opinion, closely matched main event. Robert and his corner are no dummies and there’s no doubt in my mind they will have an effective gameplan early. A plan that will not only include early pressure behind a solid jab, but might even feature shades of the old Guerrero who wanted to outwork and out skill his man.

Think Timothy Bradley vs. Juan Manuel Marquez. In that fight Bradley fought a close to perfect fight mixing in punches at range and also closing the gap to get inside. If Guerrero wants to have sustained success he will have to make Thurman think a little more. As we know Thurman is a great counterpuncher and after a few rounds should be able to time Guerrero. That’s why Robert will have to mix it up by setting traps and outworking Thurman.

Marquez, an elite counter-puncher in his own right, had problems timing Bradley and was stuck waiting or at times caught off guard when under attack. Volume could keep Thurman on his toes early and give Guerrero a lead on the judge’s scorecard. I don’t care what Las Vegas is saying about this matchup/mismatch, Robert will be in this fight for the first 4-6 rounds at least. At some point Thurman’s footwork and speed will take over the fight. I’m also waiting to see how Keith will react to the dirty tactics on the inside that are surely coming his way.

To recap, this fight will be close to even at the midway point. Potshots will turn into combinations and accurate counterpunching that will give Thurman the edge in the 2nd half. Although, I see Guerrero pushing Thurman more than the oddsmakers see it, the unbeaten fighter from Clearwater, Florida, will get his hand raised. If there is a stoppage it will be a technicality from a bad cut.

My official prediction is Keith Thurman by Majority Decision.