Tonight in London on the Katie Taylor-Karen Carabajal card, 23-year-old British heavyweight hope Johnny Fisher improved to 7-0(6) by way of a pretty impressive first-round stoppage win over The Czech Republic’s Dominik Musil. Fisher, hailing from Romford in London, looked to be in the best physical shape of his career thus far, and his speed and power thrilled his army of fans. Fisher dropped Musil twice before the referee called a halt. The time was 2:03. 31-year-old Musil falls to 7-5(5).

With just seconds gone, Fisher cracked Musil with a clubbing right hand to the top of the head, and the visiting fighter was hurt, and he was already on unsteady legs. Fisher, sensing blood, uncorked another big right hand, and down went Musil. Musil was game, and he got back up, but he was soon decked for a second time, this courtesy of another Fisher right. On the fight went, only for Fisher to blaze away with both hands, the shots sending his wounded foe to the ropes, in bad shape and having had enough. 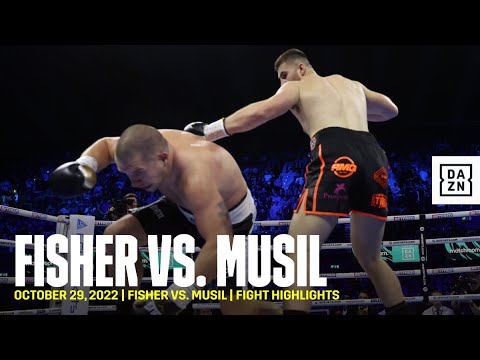 There were no complaints about the ref’s stoppage, either from Musil or from the Fisher army of fans. Eddie Hearn said after the short fight how Fisher is, at such an early stage in his career, “the biggest British ticket seller since Ricky Hatton.” Indeed, Fisher sells a boatload of tickets, which is most impressive for a now 7-0 prospect.

Fisher, trained by Mark Tibbs, trains hard in the gym, he is level-headed, knowing he has a long way to go still, and he is a lot of fun to watch. Fisher, naturally heavy-handed, had almost no amateur experience yet he has plenty of time to make his mark in the pro ranks. As dangerous as he is, it could, however, prove tough matching Fisher. On the one hand, he is still too green to be matched too tough, but on the other hand, Fisher needs to take a step up from the likes of Musil.

Hearn may have a real nugget in his hands with Fisher. Roll on the next fight/test for Fisher.