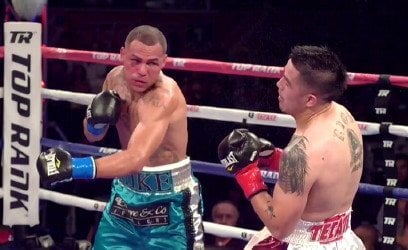 Although the strong minded combatants had shown heaps of resilience in previous bouts, it seemed that Brandon had the mental edge and the benefit of a huge chip on his shoulder going into the fight; burdened by the media and fight critics after a sluggish effort against Lightweight Richard Abril.

The Oxnard, California resident was the beneficiary of a controversial split decision this past April, which has been deemed one of the worst fight verdicts of the year…just behind Pacquiao vs. Bradley, and a virtual tie with Campillo vs. Cloud.

While Brandon and trainer Robert Garcia insisted that his uncharacteristic showing was the direct result of being depleted by weight drain, it didn’t stop the insults from flying across the regular media outlets.

But an insult to Brandon Rios is like fuel to an inferno; serving as necessary motivation to put forth his most inspired effort to date.

The action commenced as soon as the opening bell sounded, with both fighters meeting toe to toe in the center of the ring. Despite being labeled as a face first brawler, Mike Alvarado was intent on showing his boxing ability and what he characterized as his underrated defensive skills in the ring.

Even though the Denver, Colorado native was boxing effectively from a distance to begin the contest, the fighter in the Mile High warrior soon revealed itself, and the action started to heat up.

The war had officially begun in southern California.

Both men began ripping shots to the body and head with Mike winning the battle at a distance, and Brandon scoring the edge on the inside. The two fighters showed their mettle by taking savage blows and immediately retaliating with hard leather.

In both of their minds, a back step was a sign of cowardice. A retreating signal was a symbol of failure. Neither man wanted to indicate the pain felt from the hard shots landed by both fighters. Bravely, both men ate their adversary’s best punches and trudged forward in the heat of battle.

Round after round the two fighters consistently landed clean shots and dazzled the crowd in attendance. The HBO commentators were speechless at times, wondering who would be the first fighter to break under the immense pressure and consistent barrage of hard shots.

It was breathtaking action and boxing at its finest.

While the action ensued with ebb and flow current, Alvarado seemed to have the edge going into the sixth round. But despite throwing the higher volume of punches through five rounds, the heavy shots landed to the body on the inside by Brandon Rios were beginning to have a telling effect on Mike.

The former wrestler from Colorado was starting to show signs of receding power and was pushing his shots with lesser damaging affect. The pressure of Rios was steadily taking over the fight while his punches continued to land on the inside. “Bam Bam” did a masterful job of throwing in combination to the body and head while Mike attempted to point his shoulder into the chest of Rios to limit his vulnerable targets.

While rolling the shoulders and standing at an angle on the inside is a very effective technique against a pressure fighter like Rios, it usually takes years to master. It was painfully obvious to those in attendance that Mike Alvarado wasn’t accustomed to using the Michigan style of defense. The brave fighter began to wilt under pressure as a result.

In the seventh and final round, both fighters once again came out guns blazing and started firing shots without hesitation. At the halfway point of the round, Rios landed a hard right hand that buckled the legs of Alvarado. The courageous fighter staggered back into the ropes with Brandon following every stuttered step of the way.

Rios was relentless in his final attack. He chose his shots wisely and landed with amazing precision while Mike’s back was against the ropes. After taking several unanswered, chilling shots, veteran referee Pat Russell stepped in and called a halt to the bout at the 1:57 mark of the seventh round.

The war had ended and Rios was victorious.

Not only had Rios earned a very hard fought victory, but the Oxnard, California based fighter had erased the demons of his last performance.

While most fight scribes and boxing fans are sure that the Rios/Alvarado epic battle will earn fight of the year honors, where does this fight rank among the all time great ring wars of this era?

When we examine the greatest fights since the turn of the century, it’s pretty clear that Rios/Alvarado deserves to be mentioned in the same argument. But, did referee Pat Russell hinder the drama of the event by stopping the action at the first indication of serious trouble?

The biggest and most noticeable difference between Rios/Alvarado and Gatti/Ward I, Corrales/Castillo I, and Marquez/Vazquez III, was that the eventual winners of the three previously mentioned classic battles were given the opportunity to overcome extreme adversity. Their heart and determination created the drama of the event by prevailing after being floored and badly hurt.

Mike Alvarado wasn’t given the opportunity to truly show his mettle last night. But, he does live to fight another day.

When we further examine the effects of such memorable bouts and we look at the careers of the participants after the aforementioned epic ring wars, all six brave participants were never the same fighters after their heroic respective showings in the squared circle.

Perhaps in the future we will thank referee Russell Mora for stopping the action when he did. For maybe he indirectly gave us some additional epic fights in the unforeseeable future.

Only time will tell.

What we are most certain of is that on October 13th, Rios/Alvarado reminded all of us why we love the sport of boxing as much as we do.