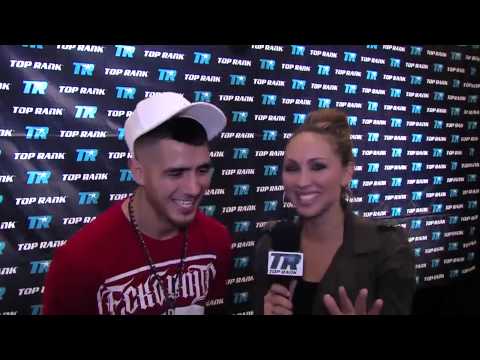 While James Gogue recognizes the dangers of facing an undefeated fighter with an iron resolve and fists to match, the expert strategist outlines Brandon Rios’ fight scheme for overcoming a potentially problematic combatant like Alvarado.

“For Brandon to win this fight, he just has to be “Bam Bam” on October 13th. Rios is facing a very dangerous opponent who has a very good chin and a strong mental resolve. He has to press the action and work his way inside in order to be successful on fight night.”

“Brandon has to force his way into Alvarado’s defence by applying intelligent pressure. He can work his way inside by using his underrated jab and feints along with upper body and head movement. Once Rios is inside of Alvarado’s defence, he’s home. Brandon is the best inside fighter since Jose Luis Castillo and Julio Cesar Chavez Sr.”

“Brandon throws brilliant, short compact punches on the inside and has three stages to his fight game underneath: hooks to the body, uppercuts to the chin, and hooks to the head. Brandon’s shots are more than likely going to land first because of how short and compact they are. He also mixes up his punches extremely well and doesn’t follow a set pattern. This creates many problems for his opponents at a very short distance.”

While James Gogue recognizes that Brandon Rios’ experienced some problems during his last two performances, the expert fight coach expects to see the best version of “Bam Bam” in Carson, California.

“I know Brandon didn’t appear to be at his best against Richard Abril, but Rios wasn’t 100% going into his title fight against a very crafty defensive fighter. He was depleted from trying to make 135 pounds for his previous outing. Fight fans will see the strongest version of Brandon Rios in the Junior Welterweight division against Mike Alvarado and he will be the tenacious bull once again on October 13th.”

Despite being the naturally larger man in the ring, Gogue believes Mike Alvarado will have to fight intelligently to keep his perfect record against Brandon Rios.

“Mike Alvarado has some underrated defensive skills and is very evasive when he decides to use them. He was avoiding punches from the outside against Breidis Prescott and Mauricio Herrera, but was taking too many punishing shots when he decided to trade on the inside. If Alvarado hopes to win his toughest test to date, he’s going to have to fight Brandon from mid to long range for most of the fight. If he chooses to let his pride and machismo get the better of him, he’s going to get knocked out by a much better inside technician.”

“Mike has a very good chin and knows how to overcome adversity, as he brilliantly showed the world in his breathtaking performance against Breidis Prescott. But he would be foolish to test his resolve against one of the best inside fighters in boxing. Alvarado has to box, box, box against Brandon Rios.”

“He must fight Brandon at angles from mid to long range and either tie up Brandon once he gets inside or turn his shoulder at a 45 degree angle and take away Brandon’s targets like Abril successfully did on April 14th. He cannot just allow Brandon to throw in combination on the inside because he will eventually get hurt with a shot he doesn’t see coming.”

“Mile High Mike has to establish his jab and fight at angles while setting traps for Brandon as he’s trying to cut off the ring. He must make Rios walk into a hard left hook or straight right hand and has to give him something to think about while he’s walking in or it will be very difficult to detour a mentally strong fighter like Rios. It’s very important that Alvarado earns Brandon’s respect early, or it’ll be a very long night for Mike.”

“If Alvarado can establish his power early, while keeping Brandon on the end of his shots and frustrating Rios on the inside by tying him up, the 32 year old Colorado native can pull off his biggest victory do date and earn a huge payday as well as a future title opportunity.”

Although James has analyzed and outlined the keys to victory for both fighters, he genuinely feels this fight can go either way and should be one of the most entertaining fights of 2012.

“Both men are mentally and physically strong and don’t know what it’s like to lose,” proclaims the expert fight strategist. “While it’s difficult to see who will eventually come out on top, I can easily see both men having many impressive moments in this fan friendly scrap. All I can say to every fight fan is, buckle-up; you don’t want to miss this superb match-up. Everything we love about boxing will be displayed in this brilliant duel and potential fight of the year!”