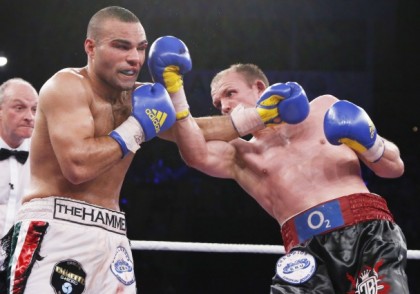 “Certainly, I can’t be completely satisfied with my performance tonight,” stated Abraham at the post-fight press conference. “But this victory came against a top-10 ranked fighter in Shihepo. My tactics were to box him, not to bang with him.” With the win Abraham, currently ranked at number four by the WBO, hopes to get another crack at a world championship as soon as possible.

Somebody who already secured his chance to fight for a world title in his next fight is Kubrat Pulev. The Bulgarian outlasted Tony Thompson over twelve rounds, beating him comfortably on all three judges’ scorecards (118:110, 117:111 and 116:112). The victory for Pulev means that he will challenge the winner of the upcoming world championship fight between Wladimir Klitschko and Alexander Povetkin. “I still have a lot of work to do as I need to get better for this challenge,” said the 32-year-old, who defended his IBF International Belt against the 41-year-old man from Washington, D.C. “But I’m confident to do so. I don’t care if I have to fight Klitschko or Povetkin next. The most important thing is to win that bout and become world champion!”