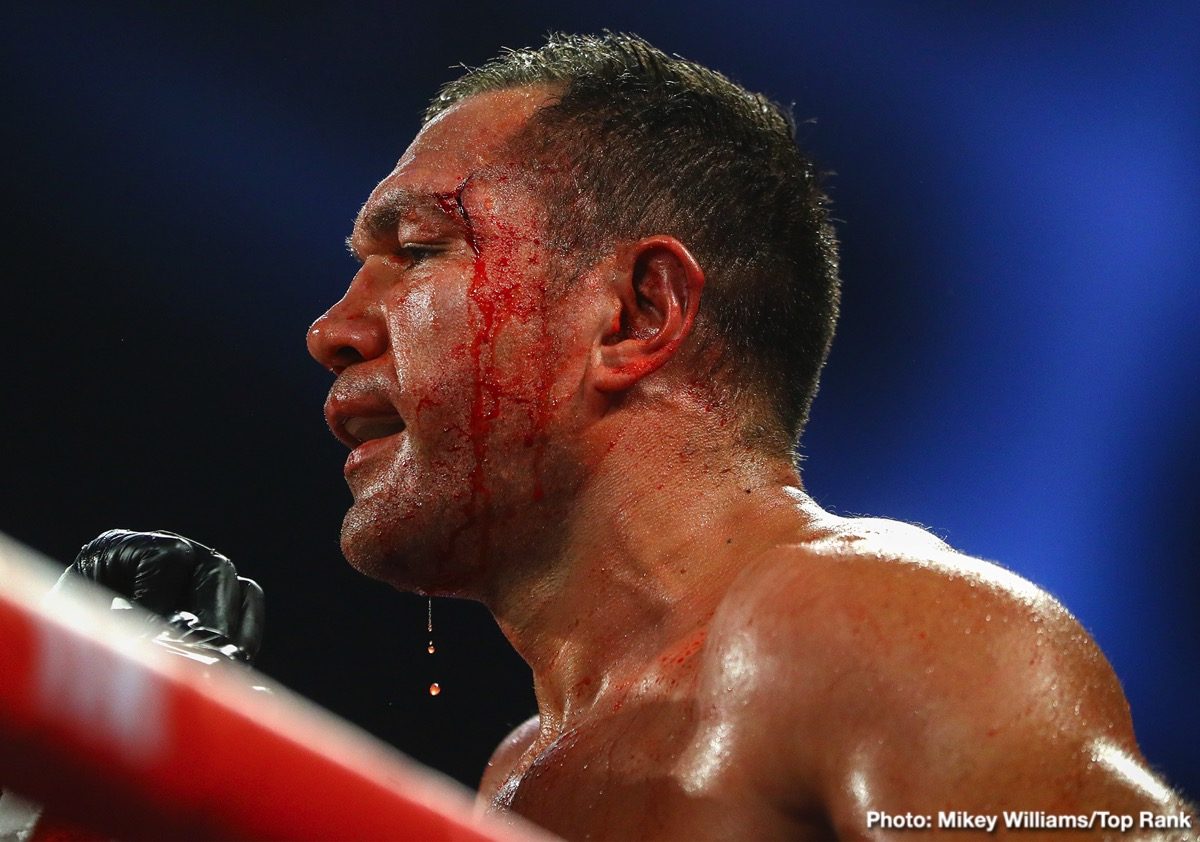 The sport of professional boxing has almost certainly never seen anything quite like it. As fans may be aware, last weekend, after his stoppage win over a game Bogdan Dinu in which he suffered a pretty nasty cut eye, heavyweight contender Kubrat Pulev grabbed and kissed a female reporter; even “groping her” in the opinion of some, the reporter included. Since then it has become apparent how very serious this issue is.

Pulev, in line for a shot at WBA/IBF/WBO heavyweight ruler Anthony Joshua, has been suspended by the California State Athletic Commission and his career is in jeopardy. Pulev, 37 and beaten only by Wladimir Klitschko, will be summoned to sit in front of the Commission and “demonstrate that he will conform to this principle of respect” before he is permitted to fight again.

The female interviewer in question, Jennifer Ravala, has secured the services of an attorney and Pulev is being very closely looked at. Despite the hot water he is now in, Pulev, 27-1(14) has found support in a number of quarters, and his girlfriend is very much standing by him.

“This is very serious,” Kubrat’s girlfriend, Andrea, told UK tabloid The Sun. “This is his life. I find this to be extremely unjust. It is killing him. He lives with boxing and a sanction like this one is killing him. He is the victim. She should be sued for degradation of the prestige. That is serious.”

So has the most talked about kiss in boxing history (unless you can come up with another incident along these lines that tops this case) been blow out of all proportion, or is Pulev guilty of a form of sexual assault? It really is a strange one, that’s for sure. In terms of Pulev and his boxing career, at age 37, the Bulgarian does not have time to waste and if his suspension turns out to be a longer one that is anticipated, who knows how it will affect his chances of fighting for, much less winning, the world title.

It’s tough not to feel some sympathy for Pulev, but then again, we are boxing fans. Where does your sympathy lie, with Pulev or with Ravala?

Email
WhatsApp
Tweet
Share
Previous boxing news: Vitali Klitschko Vs. Wilder: The Only Man To Have Fought Both Champions Says There Would Have Been A Clear Winner
Next boxing news: All Access: Shields Vs. Hammer – Episode I
You are here: Home / Boxing News / Bizarre Case Of Kubrat Pulev And ‘The Kiss’ Goes On; Pulev’s Girlfriend Stands By Her Man
Follow @boxingnews24