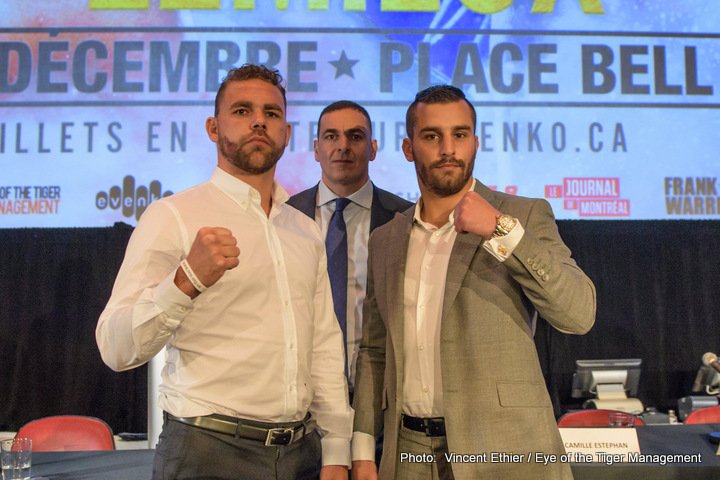 Reigning WBO middleweight champ Billy Joe Saunders deserves credit for facing the dangerously hard-hitting David Lemieux next month; but the unbeaten southpaw deserves even more credit for agreeing to face the former IBF champ in Canada. And while BJS is convinced he has the beating of Lemieux, the notion of his being robbed if the fight goes down to the wire and is at all close has crossed his mind.

So what to do: make sure the fight is in no way close just in case the three judges are needed. And, in speaking with iFL TV, Saunders said that this is exactly what he is going to do on December 16.

But can Saunders beat Lemieux, 38-3(33) to the point where there is no doubt who won? Saunders has not predicted a KO or stoppage win so maybe he feels his silky southpaw skills – the same ones that accounted for Chris Eubank Junior a couple of years ago; the decision defeat still being the sole loss Eubank Jr. has suffered – will prove too much for Lemieux.

Still, this one is a genuine 50-50 fight; a potentially great fight. And Saunders sure is taking the task at hand as seriously as possible – just take a look at the simply fantastic physical condition BJS appears to have whipped himself into with still over three weeks to go until fight night.

But Lemieux, who scored that chilling KO of The Year candidate over Curtis Stevens back in March of this year, is as convinced he will win as Saunders is.

“One month until you hit the canvas,” Lemieux tweeted (with some added, colourful language throw in for good measure!) a while back.

Fans seems to be in agreement: if there is a KO in this fight it will be Lemieux who scores it. But if it’s a boxing match, a chess match even, then it could be Saunders’ fight big time.

British boxing would have seen two hugely intriguing fights take place on the December 16/17 weekend, but now, with the fallout of the Bellew-Haye return, they have this fight as a stand alone fight that weekend. But how Saunders Vs. Lemieux stands alone as a potential classic.

And The Nastiest KO Of The Night Award Goes To ....Filip Hrgovic!
Follow @eastsideboxing