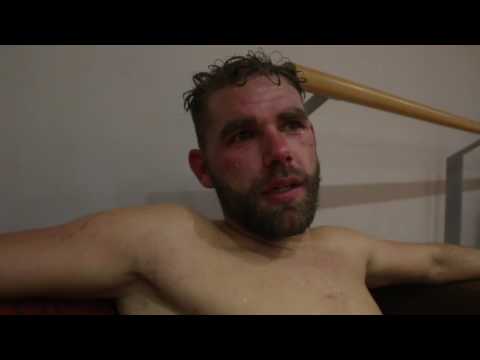 In one the more poorer performances we’ve seen from WBO middleweight champion Billy Joe Saunders (24-0, 12 KOs), he was forced to dig deep to beat fringe contender Artur Akavov (16-2, 7 KOs) by a 12 round unanimous decision tonight at the Paisley Lagoon Centre in Glasgow, Scotland. Saunders fought well enough to win between four to six rounds on this writer’s scorecards, but definitely not to deserve the victory.

Akovov outworked Saunders in almost every round of the fight. It’s hard to know from tonight’s performance whether Akavov is better than what many boxing fans thought or Saunders is simply not a world champion level fighter. I think it’s more of the latter. Saunders isn’t very good in my view, and I think he’s just keeping his WBO belt warm until it’s taken from him by Gennady “GGG” Golovkin or Saul “Canelo” Alvarez.

This was Saunders’ first title defense of his World Boxing Organization belt, which he won last year in December against Andy Lee. Saunders was supposed to have defended the belt on a number of occasions during 2016, but he had injuries, paper work problems, and being a little too selective. Saunders was initially scheduled to defend his title against fringe contender Max Bursak earlier this year. The fight was canceled after Saunders suffered an injury. Saunders had an offer to fight on the undercard of the Canelo Alvarez vs. Liam Smith card on September 17 at the AT&T Stadium in Arlington, Texas. Saunders rejected the opponent that was offered to him by Golden Boy Promotions.

“Tonight was really, really flat,” Saunders said. “I’d like to apologize to the fans…on that performance my name shouldn’t be mentioned with Golovkin and Canelo!”

Saunders is fortunate that he wasn’t in the ring with Golovkin or Canelo tonight, because he would have likely been blasted out quickly by both of them. The way that Saunders fought, he wouldn’t have made it past a half dozen of the top contenders in the division unless he had scoring like he had tonight.

Other results on tonight’s card: