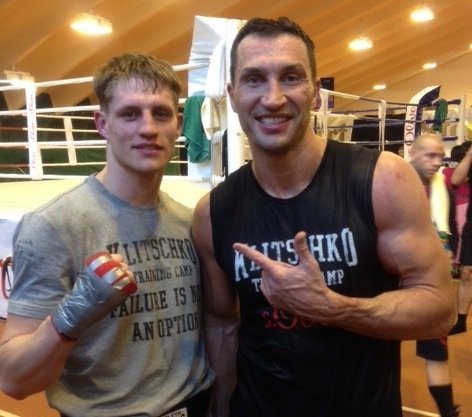 The Corby talent, a two-time and two-weight ABA Champion, is at Klitschko’s Austrian training camp to help the Ukrainian great with preparations for his title defences against Alex Leapai on April 26 in Germany.

Barclay got his professional career off to a great start with a four-round points win over tough and experienced Lithuanian Igor Borucha, who last time out took former Midlands Area Cruiserweight Champion the distance.

Now the 24-year-old is getting valuable experience against one of the greatest heavyweights of the modern era and here he explains in his own words what his day is like.

“I arrived on Sunday around midday, but I didn’t start my training until Monday morning which was good as I had time to recover from my fight.

The days we train I go to the gym at 7am to do a session of our own choice, I normally do a cardio session on the treadmills and bikes, etc, before heading back to the gym at 4pm for my sparring sessions with Wladimir.

There are six sparring partners here, including me, so we do a couple of rounds each, I did two rounds on Monday and two on Tuesday.

When you see Wladimir on TV you know he’s big but when you meet him in person he looks even bigger, but he is a very pleasant and hospitable and comes up to you and introduces himself to you.

He is so difficult to spar, his distancing is brilliant, it makes it so hard to land a shot on him, he also punches very hard, his jab is like someone hitting you with a pole and also you don’t realise just how fast he is.

I had some great feedback from him after yesterday’s spar he said my technique is fantastic and showed me couple of little things for me to improve.

The heavyweight sparring partners all went home this morning so it leaves just me (great!) and one other lighter boxer for the rest of the camp to work on speed.

Today (Wednesday) I’ve had a rest day so I’m just going to chill out and then I am back sparring Thursday and Friday before flying home on Saturday.”