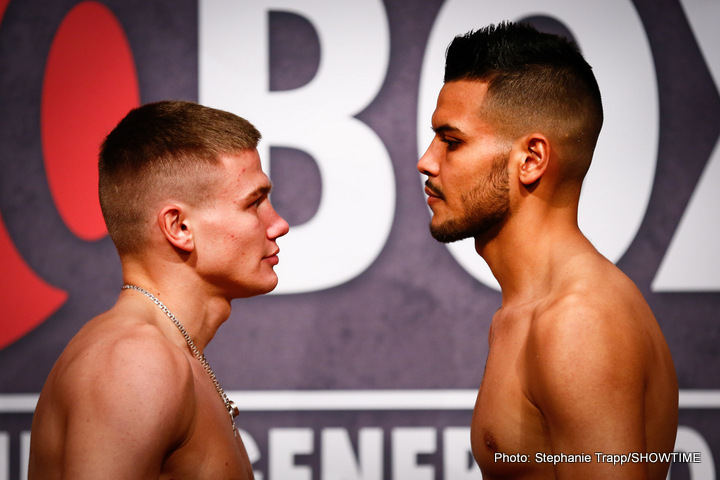 The hard-hitting Baranchyk (13-0, 10 KOs), who trains in Los Angeles and fights out of Miami, has scored 10 KOs inside of three full rounds, while the aggressive-minded Ramos (17-1-2, 12 KOs), of Casa Grande, Ariz., has knocked out three straight and promises to be the toughest test of Baranchyk’s career.

Tickets for the event promoted by DiBella Entertainment and Tony Holden Productions in association with Fight Promotions are priced at $35, $55 and $75 and are available at buffalorun.com and at stubwire.com.

“I’m working with a new trainer (Eduard Kravtsov) at Wild Card Gym. We had some mistakes with our old team and it was time for me to move on. It was my decision to move on.

“We have better sparring now, a new coach, new strategy. Wild Card is a different experience. We have tough sparring, tough training. It was a good change.

“Ramos is my toughest opponent, but we’re ready for everything he brings. We’re ready to fight on the inside, on the outside.

“The game plan is to get the victory. That’s the most important

“The first couple rounds are the most dangerous. We know he’s tough and experienced. We need to make it my fight, style-wise.

“My last two fights went the distance, but it was good to know I can go 10 rounds. It was good to get that experience.

“People connect with me here (in Miami, Okla.). I can’t explain it, it just works.”

“Ivan is a different fighter. We know what we’re getting in there with and we’re going to feel out his power. His last two fights went the distance so he must not hit that hard. We’re going to wear him out.

“Ivan is aggressive, and he can be explosive at times, but he makes mistakes. He fights a little wild.

“I think I can start to worry him. We’re going to test his power and decide how I need to fight. He hasn’t fought anyone at my level yet.

“I’ve been working on pushing the pace. You’ll see some of that tomorrow night.

“We sparred with Sergey Lipenets, helping him get ready for his fight in December. That was a good experience for us.

“I’m here to show that I’m back and ready for the top guys. I’ve had three wins by knockout since the loss. I’m a different fighter.”

“We know Williams is an aggressive fighter that comes forward. I’ve seen some tape. I’m expecting him to come at me. But it’s nothing I’ve never seen before.

“I need to bring the pressure so the judges won’t have any doubt. I need to fight my fight.

“I think I’ve fought the better opponents. I think my experience is going to be the difference.

“The quality of fighters here (in the U.S.) is better than back home (Dominican Republic). This is where I want to fight now.”

“He (Castillo) has a few more fights, but mostly in the Dominican Republic, so we don’t know how good he actually is.

“He may be an Olympian, but look who I fought in the amateurs. Look at the men that I beat. And those guys are mostly cruiserweights now. I’m much stronger at light heavyweight.

“This is the right time and right place for us. This is a huge opportunity.

“I don’t think he’s the best fighter I’ve faced. If I hit him clean I don’t think it will go that far. I’m going to go in there with an open mind and exploit his weakness.

“I’ve gradually moved down in weight. I’m faster at light heavyweight. When I was heavy I took my time. I’m sharper, faster. I’m just a totally different person.

“I always compare myself to James Toney. I can hit hard, I can take a punch, and I’m slick. What you see will depend on my opponent. If I feel he’s weak, I’ll jump early. I can brawl, I can box. I’m explosive.”

“I sparred with (Carl) Frampton in Las Vegas for the (Leo) Santa Cruz fight. It was a great experience sparring with him three times a week. It gave me more confidence knowing I could handle him.

“Garza is basically the same height as Frampton, so that will be an advantage.

“I know he’s going to come at me, and we’re ready for that. I need to keep my rhythm and make it an entertaining fight. I believe my power and speed will be the difference. I throw a lot of punches.

“This fight means a lot to me. We’re both good fighters and the TV exposure means a lot. It’s a good opportunity and I need to take advantage of it.”

“I’ve always been an aggressive fighter. I like to bring the pressure.

“I’ve faced guys as tall as him before, I fought a guy that was 6-foot-2. I know I need to get inside with a guy like this.

“I’ve seen a lot of his fights, and I don’t think he’s a fast puncher. He always fights the same style, and his opponents are always there for the taking. I’m not going to be there for him to hit like that.

“This is my chance. This is a big opportunity for me.”