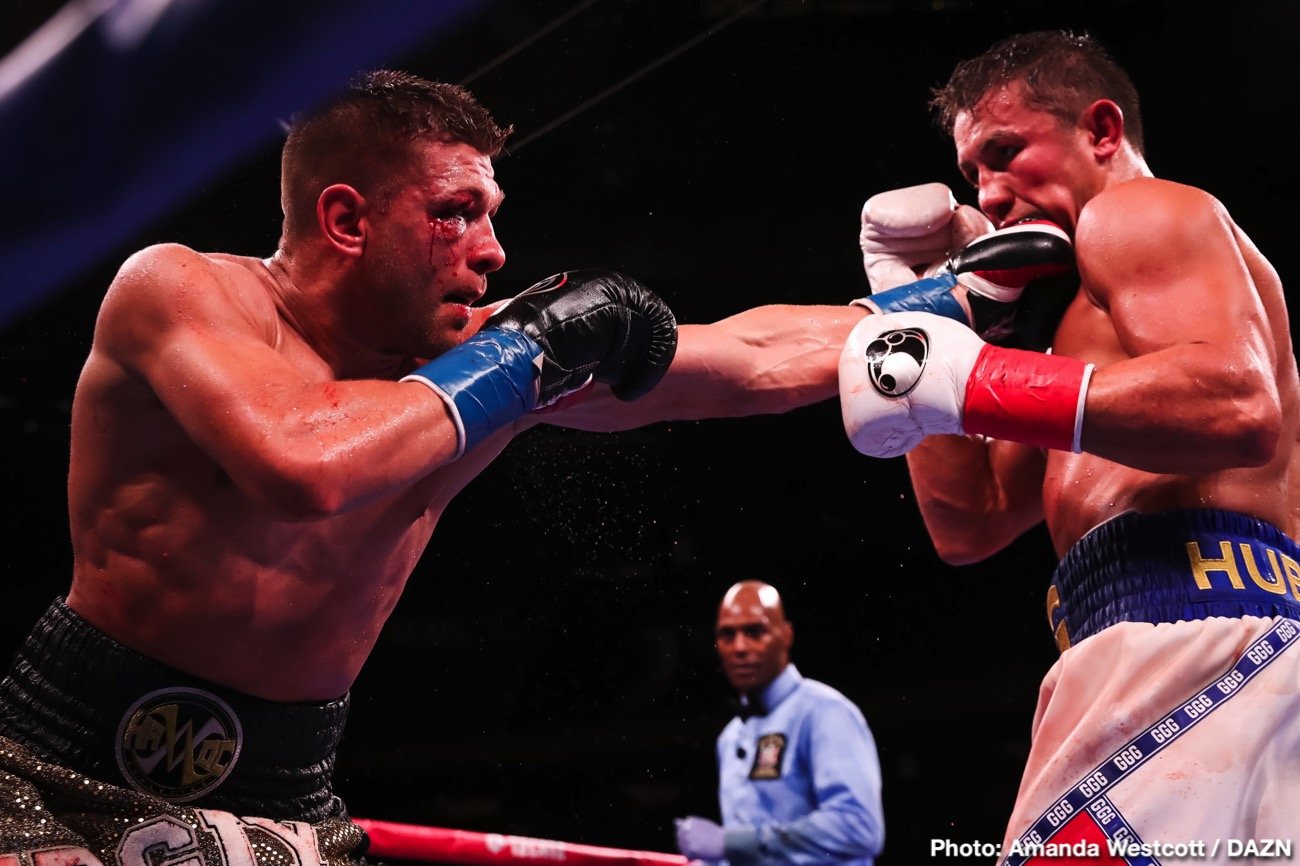 Trainer Johnathon Banks isn’t happy with Gennadiy Golovkin’s performance in beating Sergiy Derevyanchenko by a 12 round unanimous decision last Saturday night at Madison Square Garden in New York. Banks says that Golovkin either needs to retire or make the changes to his fighting style that he’s asking him to do.

The loud chorus of boos that Golovkin received by fans after the fight showed clearly that they saw him as the loser in the fight. GGG’s promoter Eddie Hearn was seemingly in denial after the fight, saying that Golovkin dominated the championship rounds. It didn’t look like that. Derevyanchenko out-hustled Golovkin in the championship rounds, and backed him most of the time. Even in the 12th, Derevyanchenko was coming forward and backing GGG up.

Golovkin took a lot of heavy blows from the underdog Derevyanchenko (13-2, 10 KOs), and he came out looking like the loser.

Despite Golovkin winning the fight by a decision, Banks wasn’t happy. He takes responsibility for GGG’s failures, but he wants to change his style. Banks doesn’t want Golovkin to continue to take punishment the way he’s doing now, beause he’s an older fighter facing younger guys.

Banks said GGG failed to do anything of the things that they’d been working on during train camp such as moving his head to avoid the shots, and raising his punch output. Golovkin (40-1-1, 35 KOs) frequently backed up, and let Derevyanchenkp come forward to attack him. Banks says he was telling GGG during the fight that he didn’t want him doing this, but he failed to follow what he wanted.

“It’s my fault. I’ve got to get over to him that he needs to do this life or death situation,” said Banks. “Either he needs to retire or do it this way. If he can’t do it that way, I hate to see my guys taking all these punches, and I know they’re better than what I’m seeing. I take the blame for it,” said Banks.

What Banks isn’t saying is that it might be too late in the game for him to change Gennadiy’s fighting style. He’s 37-years-old, and has been fighting with the same style since his amateur days. In looking at Golovkin’s loss in the final of the 2004 Olympics, he was out-hustled by a Russian fighter.

Golovkin doesn’t have the stamina for him to fight in the fast pace style that Banks wants him to, and he doesn’t look comfortable when fighting at a fast pace that he needs to for him to beat the younger fighters.

GGG not likely to retire

With the money that Golovkin is going to continue to get for his fights with DAZN, he’s not likely going to retire before he completes his 6-fight contract. This was GGG’s third fight of his contract. What he wants is a trilogy match against Saul Canelo Alvarez next May. That’ll be a huge payday for Golovkin and Canelo.

After Golovkin’s performance against Derevyanchenko, there’s a possibility Canelo may gave him the fight that he’s asking for. The Mexican star has got to know from watching Golovkin looking so feeble against Derevyanchenko that if he doesn’t fight him soon, he’ll miss his chance. Golovkin is too far gone for him to be counted on to beat the guys that his promoter Eddie Hearn wants him to fight.

“I told them, we’re in for a long night,’ because this kid is one tough customer,'” said Banks to secondsout after Golovkin’s 1st round knockdown of Derevyanchenko. “You’ve got this young kid Dereyanchenko. He wants to sprint.

“When we were starting the fight off, I was trying to get GGG to start the fight off fast, because he’s fighting younger and younger competition. I’m trying to get him to start off faster. You let your hands go, build your own lead, and you can dictate the pace,” said Banks.

“The first round. You seen the way he got up and reacted,” said Banks when asked when the fight started to turn in Derevyanchenko’s direction. “He’s been fighting the way he fights for a while,” said Banks about Golovkin. “Getting him to start slipping punches, moving his head, and letting his hands go is difficult,” said Banks.

Golovkin looked winded after the 1st round when he went back to his corner. He had dropped Derevyanchenko with a shot to the back of his head when he was ducking down. But after Derevyanchenko got back up, he took the fight to Golovkin and finished the round strong.

“I don’t doubt in myself that I can do it, but it’s difficult,” said Banks. “These are the type of fights that GGG likes for whatever reason. He wants to please the crowd. I don’t care about pleasing the crowd. I care about my fighter winning, and protecting him at all costs. Everyone in this division with titles is younger than him [Golovkin]. And if you want to stay with these young boys, you got to do what you’ve got to do.

“I’m trying to take what GGG already has and add some defense to it, and raise his offense output higher. That’s all. Those are two things. The main things are defense and a higher offensive output. Those are the main two things that are damaging for him, and anybody that knows how to move knows it,” said Banks.

It might prove to be impossible for Banks to change Golovkin’s fighting style. He looks to be the same fighter in his two fights with Banks as he did before he started training him. GGG physically CAN’T increase his punch output no matter how much Banks wants him to. GGG is never going to be a nonstop puncher like boxing great Aaron Pryor. The only thing Banks can do is teach GGG to throw his jab more, move his head, and avoid being stationary.

Banks warned Golovkin about backing up against Derevyanchenko

Banks should know by now that it’s impossible for him to make any real changes to Golovkin’s fighting style. He’s stuck with the way he fights, for better or for worse.