In the opinion of a number of good judges, unbeaten heavyweight contender Jared Anderson will not only become the next American to win world honors at heavyweight, but he may well go on to dominate the division.

One of these people is Tyson Fury, who has sparred with the 22-year-old from Toledo, Ohio, and has had nothing but great things to say about Anderson. Another is Bob Arum, who says he would be prepared to discuss an Anderson-Deontay Wilder fight by the end of this year.

Anderson, 11-0(11) and yet to be extended past the 6th round, looks to be the whole package: fast, powerful, athletic, a dedicated trainer in the gym, young and hungry.

As with any young up-and-coming fighter, we don’t know yet how well Anderson can hold a hard shot, nor do we know how his stamina will hold up in the later rounds of a tough fight. But so far Anderson has plenty of people believing he is THE young heavyweight to be watching.

Anderson’s promoter Arum, who spoke with Sky Sports, likes the idea of a Wilder-Anderson fight going down before the year is out.

“Wilder is a terrific talent. He hits like a mule, as Tyson [Fury] would attest to,” Arum said. “Pretty much anybody in the heavyweight division would lose to Wilder.

The one guy who will be equipped to beat him, by the end of this year, is Anderson. I would be prepared to discuss a potential Wilder versus Anderson fight by the end of this year. We are grooming him to be the next heavyweight champion after Fury. When Fury hangs up the gloves, Jared will be in pole position to become the next great heavyweight.”

High praise indeed, or to be more accurate, high expectations indeed. But when a fan is watching Anderson fight there is that feeling that he is something special, something to get excited about.

At 6’4” and around 240 pounds, Anderson is big enough for the juggernaut heavies, but more than that, he is talented enough to make us think he can and will go on to reach the top.

Will Wilder agree to fight him? If so, it would perhaps be a real changing of the guard type of fight; that’s if Anderson wins of course.

But Wilder, if he does fight again, would be a huge test for the 22-year-old. Will Anderson be ready the for elite before the end of 2022? We will all be keeping a close eye on things, watching how they develop. 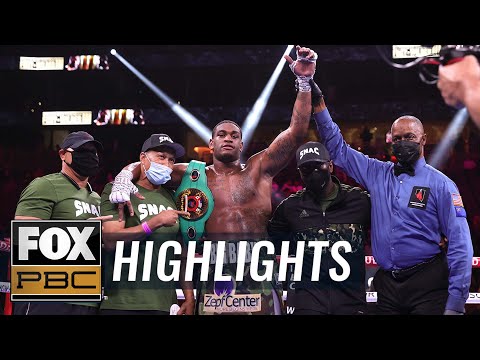