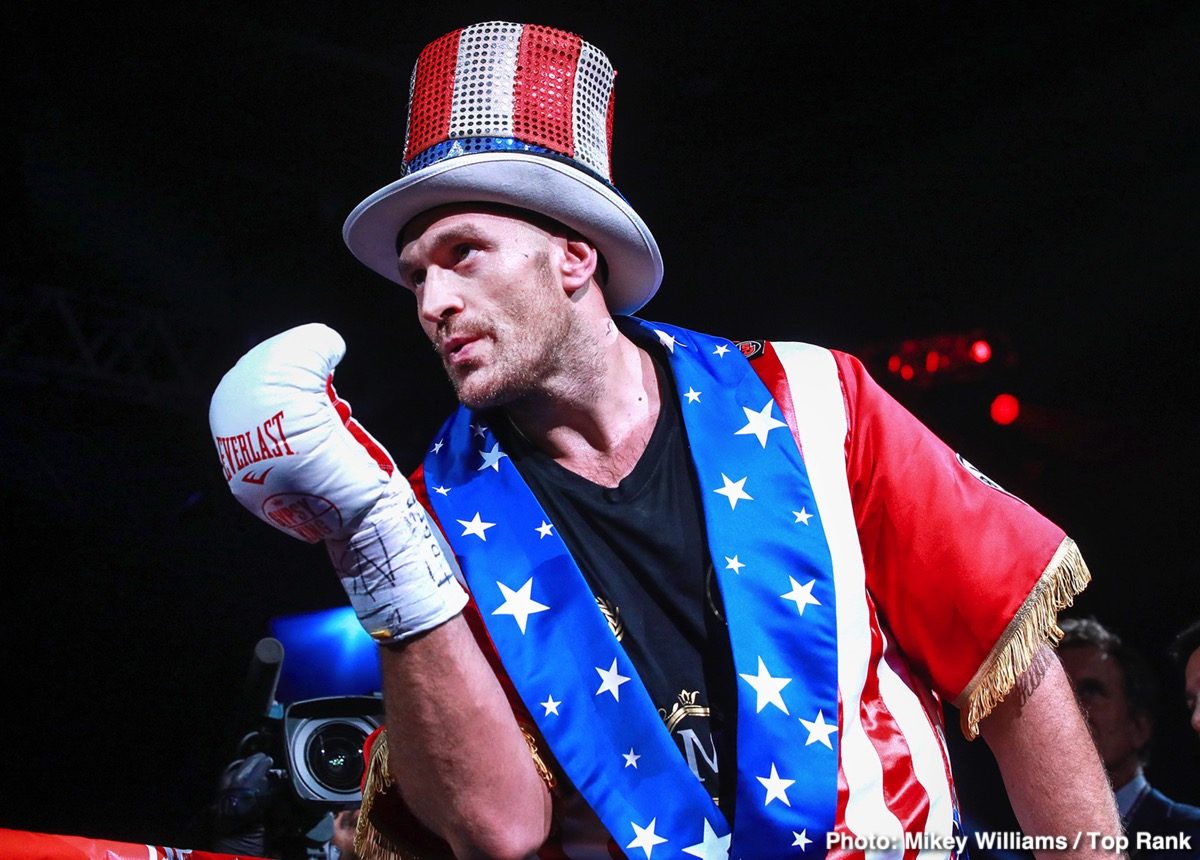 Tyson Fury’s next fight could take place on October 5 at Madison Square Garden in New York, according to Top Rank promoter Bob Arum. There isn’t an opponent that heads the list for Fury to fight in October, but Arum is in talks with unbeaten American Jarrell ‘Big Baby’ Miller, and he could be adding him to his Top Rank Boxing stable.

A natural fight for Fury would be against the 315 pound Miller if Arum is able to add the New Yorker to his stable.

Having Fury fight Miller in in his next fight in October would be a questionable move on Arum’s part. Miller recently failed four drug tests for a against IBF/WBA/WBO heavyweight champion Anthony Joshua that was supposed to take place on June 1 at Madison Square Garden in New York. Miller ended up being pulled from the fight. However, given that Miller will likely be still suspended by October, he probably won’t be available to fight Fury. This would be a similar fight as the Manny Pacquiao vs. Antonio Margarito match that took place in 2010.

Arum predicting Wilder vs. Fury rematch does over 4 million buys on PPV

Fury’s popularity in the U.S has soared sky high after his second round knockout win over Tom Schwarz (24-0, 16 KOs) last Saturday night on ESPN+ at the MGM Grand Garden Arena in Las Vegas, Nevada. Top Rank and ESPN marketed the mismatch to the hilt. The fight was painfully poor, but Fury got the win and the attention from the casual boxing fans that Arum wanted.

“I think Las Vegas is the likely place for the fight,” said Arum at the post-fight news conference last Saturday night in talking about the location for the rematch between Wilder and Fury. “I expect both guys [Wilder and Fury] to get through their next fights. The fight will be the first quarter of next year. I really believe, and I’m not blowing smoke, it’s going to be on pay-per-view, and I can’t see why the fight won’t equal or surpass the numbers that were done on the Mayweather-Pacquiao fight. Those were two little guys, great fighters, Mayweather-Pacquiao; It was built up for a lot of years, but still they’re not heavyweights of this kind of category, and now this notoriety. The reason the Wilder vs. Fury first fight didn’t do real numbers, let’s be honest, other than with some hardcore boxing fan, the public in America didn’t know the guy [Fury]. They really didn’t know him. Now they know him, and after the fight in October, they’ll know him even more. Wilder will hopefully have a good fight with [Luis] Ortiz and beat Ortiz. The [Wilder vs. Fury] rematch, I think, is capable of doing over four million pay-per-view buys,” said Arum.

Going from 325,000 buys for the Wilder-Fury fight last December to over 4 million buys for the rematch in less than a year, doesn’t sound feasible.