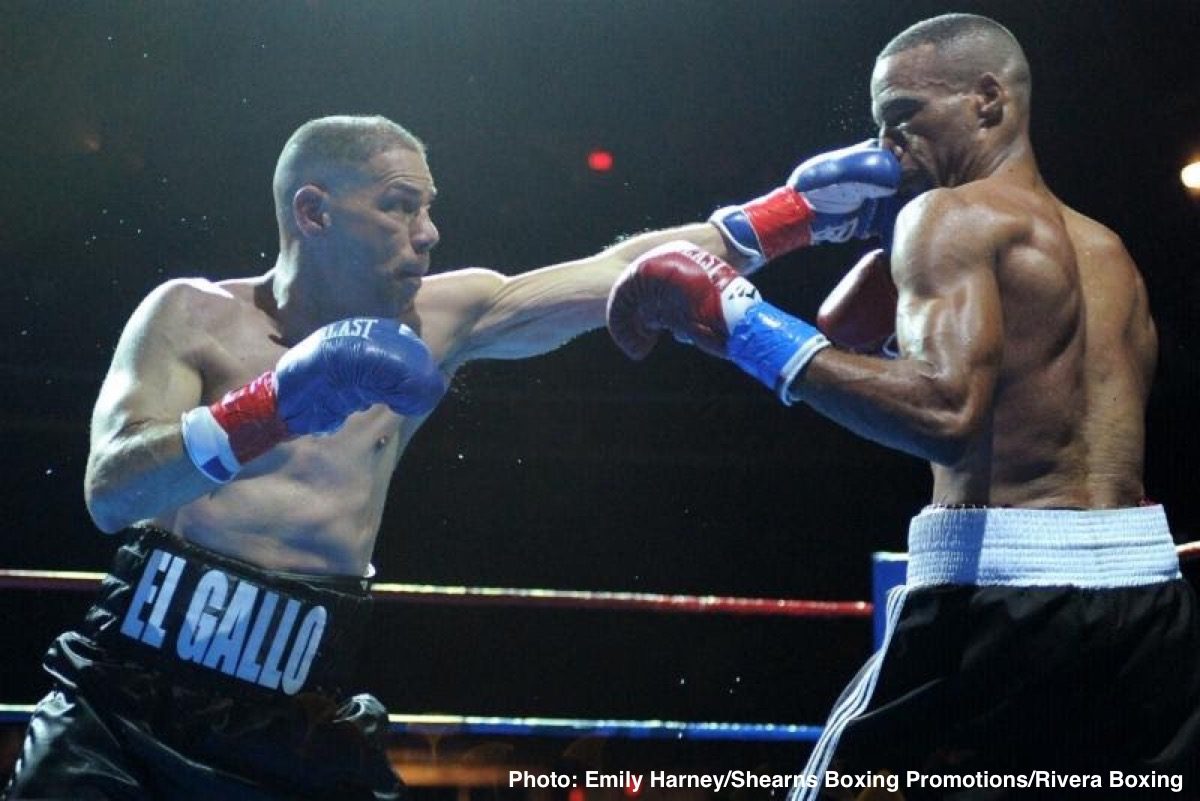 “I thought I was winning the fight but I felt that I had to put my punches together in the last few rounds,” said Rivera. “I was the busier fighter and kept throwing multiple punches to his one at a time.”

Rivera aggressively stalked Scott around the ring and out-threw and outlanded him in the first three rounds, especially to the body. Scott finally let his hands go in the fourth-round and connected on the harder, sharper combinations. Rivera controlled the fifth-round until Scott caught him off balance and dropped him via a right hook to the top of his head just as the round ended. Rivera was not bothered by the knockdown and quickly got up.

Scott landed several powerful jabs and hooks in the sixth, as Rivera was having trouble getting in on the inside of the taller fighter. Rivera knew the fight was close and came out in the seventh and eighth round with a new sense of urgency. He was the busier fighter in both rounds as he pressed the action, outlanded Scott, and connected on the harder punches.

“This was definitely my last fight,” said Rivera, who ended a pretty good twenty-six and a half year career. “It is time for my new career [he was recently promoted to Associate Chief Court Officer]. Every time you go into the ring, you want to win, especially the last one. It was great to win my last fight in my hometown of Worcester.”

This seven-bout fight card, “Quest For 50” was co-promoted by Shearns Boxing Promotions and Rivera Promotions Entertainment, the boxing promotional company that Rivera co-owns with his son AJ, from The Palladium in Worcester, Massachusetts. A portion of the proceeds from this fight card were donated to the Boys & Girls Club of Worcester.

In the co-feature, New England middleweight champion Kendrick “Peppa” Ball Jr. scored a sensational third-round technical knockout victory over Juan Celin Zapata, as referee Paul Casey stopped the super middleweight bout at two minutes, thirty-four seconds after Zapata went down for the sixth time. Ball upped his record to 13-1-2, 9 KOs and has won four in a row. His belt was not on the line for this fight. Zapata fell to 6-15-2, 4 KOs. Ball knocked down Zapata twice in the first-round, once in the second, and three times in the third. Ball dropped Zapata three more times, twice in the first and once in the second, but Casey ruled them as slips, even though they appeared to be knockdowns. Zapata demonstrated a great deal of heart as he somehow got up from each knockdown and fought hard.

Undefeated heavyweight Owen “The Problem” Minor destroyed late replacement Joseph Raposo with a quick, first-round technical knockout win. Minor connected on a devastating right hook to Raposo’s body that dropped him to the canvas and Raposo was unable to beat the ten-count, thirty seconds into the round. Minor, a heavily decorated amateur, improved to 2-0, 2 KOs. Raposo, who was making his professional debut, dropped to 0-1. Minor will be back in the ring against Justine Rolfe (1-0, 1 KO) at the Rim in Hampton, New Hampshire on July 20th.

Ringside doctor Peter Warner called to a halt the junior welterweight bout between Sidney “Keelo” Maccow and Anthony Everett at the end of the third-round because of a massive hematoma that was growing over Everett’s right eye, which was formed from an accidental headbutt. Since the fight did not go the full four-rounds, it was ruled a no contest, and the New England junior welterweight title will remain vacant. Maccow (6-8-1, 3 KOs), who is unbeaten in his last three bouts, dominated this fight. He out-threw and outlanded Everett (1-7-1, 1 KO) and connected on the harder shots. Maccow staggered Everett several times in the third-round, but Everett did not go down.

Former two-time New England Golden Gloves champion, “The Special One” Sharad Collier obtained a first-round technical knockout victory over Bruno Dias, as referee Kevin Hope stopped the welterweight bout with thirty seconds left in the round after Dias went down for the third time. Unbeaten Collier upped his record to 2-0-1, 2 KOs. Dias dropped to 0-8. Collier scored three knockdowns via a right hook to the head, left, right hook to the body, and a right hook to the head.

Philip “Rock Solid” Davis scored a hard fought, four-round unanimous decision over Henry Garcia via three scorecards (40-36). Both fighters landed well throughout this action-packed, competitive junior lightweight bout, however, Davis landed more punches and connected on the more powerful shots. This was Davis’ first fight in a year and a half as he improved to 2-1-1. He is unbeaten in his last three bouts. Garcia fell to 0-2-1.

Former New England Golden Gloves champion, Elijah Peixoto made a successful professional debut with a second-round technical knockout win over Carlos Galindo, as referee Hope stopped the one-sided welterweight bout with fifty-six seconds left in the round after Galindo was dropped for the fifth time. Peixoto (1-0, 1 KO) scored three knockdowns in the first-round via right hook to the temple, left hook to the body, and left, right hook to the head. He knocked down Galindo two more times in the second-round, both from right hooks to the body. Galindo dropped to 1-11.