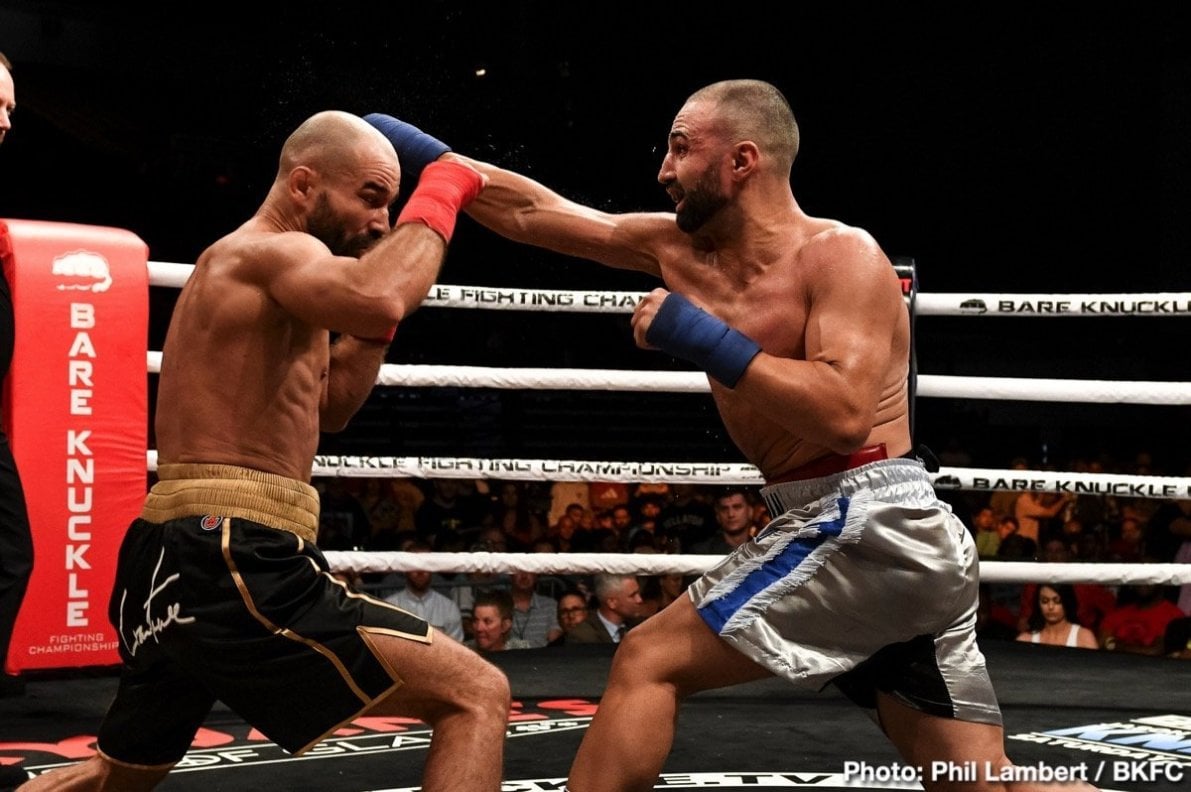 While some fans were not exactly sure what to expect from last night’s bare knuckle fight between former two-time world champion Paulie Malignaggi and MMA warrior Artem Lobov, one thing that was expected was blood. And fans got blood; and more than likely a broken bone or two.

Lobov won the fight, as opposed to the boxing, and he was awarded a five-round (x2 minute sessions) unanimous decision with all three judges turning in identical score-cards that read 48-47. Quite surprisingly considering the incredibly tense and nasty build-up last night’s fight in Tampa enjoyed, with death threats and a whole lot more from both fighters, the two embraced and showed mutual respect at the end of the fight.

Both guys were quite badly marked up, both guys suffering cuts to the eyes. Malignaggi said at the post-fight presser that while he couldn’t be sure, he felt quite positive that he had broken his right hand. Malignaggi also said that his left hand was very badly swollen. Lobov said he tips his hat to Malignaggi for “showing up,” while Paulie, though respectful to the man he said in the run-up to the fight he wanted to “put in a coma,” claimed he was robbed by judges who “don’t know what the f**k they’re doing.”

Malignaggi enjoyed a good start to the fight, boxing, jabbing, using feints and being too fast and, as was widely anticipated, too skilful for Lobov. But in round-three, the stronger, more aggressive Lobov broke through and busted Malignaggi up in a clinch. Malignaggi later claimed he was hit with just one punch but his face told a different story.

Southpaw Lobov was able to tag Malignaggi and either knock him off balance or clearly hurt him. Lobov was fighting, Malignaggi was boxing. The judges liked the fighting.

So what now? 38 year old Malignaggi hinted at retirement when speaking at the post-fight press conference, while Lobov, 32, has spoken of his desire to try his hand at boxing. Last night’s fight had a big curiosity element to it and though some fans remain turned off by the brutal reputation bare knuckle fighting has, chances are big we will see more fights of this kind soon.

Which other big-name boxers may follow Malignaggi’s lead and take a fight without gloves?

(Note: former champ Randall Bailey was supposed to have his own bare knuckle debut last night, against Daniel Santos, but at the last moment the fight was pulled from the card)