Last seen despatching another veteran in Mariusz Wach, who took Makhmudov into the 6th round, has been angered because of the fact that “there aren’t a lot of boxers who want to face me.” Makhmudov’s promoter Camille Estephan says his fighter is “the most feared heavyweight in the world” today. 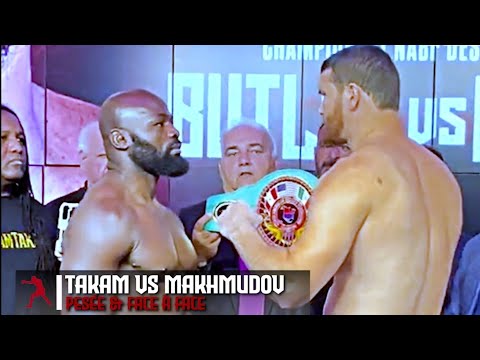 Takam has been around forever and the 41 year old has been in with plenty of names. However, Takam has not fought since being stopped in six by Joe Joyce last July. What kind of a test can the seasoned Takam give the Russian banger?

Estephan recently spoke with Sky Sports and he said his fighter is gunning for the champions, Tyson Fury and Anthony Joshua, and that if one of them actually agrees to face Makhmudov the giant from Mozdok will be world champion for quite some time. But how good is Makhmudov?

A good amateur, winning the European Student Championship, Makhmudov went pro in December of 2017, boxing in Canada. Decent fighters such as Emilio Zarate, Jonathan Rice, a faded Samuel Peter, and Wach have been wiped out. Now, Estephan says he wants to put his heavyweight in with the bigger names. Takam is another step in the right direction.

We know Makhmudov can punch, yet what about his chin, his stamina, his ability to cope with the big event? Estephan says his fighter has power than can “make Wembley Stadium tremble,” that he has the kind of raw power that can “put anyone to sleep.”

Estephan is doing a great job doing what he is supposed to be doing – promoting his fighter. And I for one do want to see more of Makhmudov. It will be interesting to see if Makhmudov can make short work of Takam.